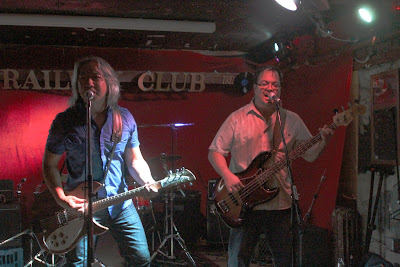 China Syndrome by bev.davies, not to be reused without permission

One of the nicest people I've met on the local music scene is Tim Chan, the frontman of the former 64 Funnycars and current leader of China Syndrome, pictured above on the left. I suspect Tim's got a very interesting story to tell. It connects the dots from Victoria (where he played in one of the punk bands on All Your Ears Can Hear, I believe known as Ryvals, and worked in various other projects, including one with Tom Holliston of Nomeansno and the Show Business Giants called Hathead) to Seattle (where 64 Funnycars, friends to the Young Fresh Fellows, recorded an LP and EP with Conrad Uno), to Vancouver, where he's now based. I've been pestering certain local papers for awhile about doing a feature on him, to no avail as yet, but I have no plans of giving up - I mean, I was able to get a No Fun story into print after maybe ten years of suggesting one every few months, to correspond with the odd David M. gig, so who knows, maybe persistence pays off? Nevermind Tim being a nice guy, too - I genuinely like his music, think it's smart, catchy, and creative stuff (bandcamp here). They're one of the more engaging local pop bands out there at the moment, not that you'd necessarily know it from the amount of attention they're receiving!

That said, I got nothing much to say at present bout the gig on July 24th at Lanalou's, except people should go see it. China Syndrome's last show at the Railway featured a kickass cover of Squeeze's "Another Nail In My Heart," which, it turns out, works just great with a bit more of a guitar driven power-pop presentation. Seeing it thus embedded the song in my head for weeks afterward. And then there's great originals, like "My Pal Dan," a song sort of about envy and failure and the sort of emotions that might inspire one not to attend high school reunions. It's my favourite song on their second album, The Usual Angst (which is presently available on a very limited-run vinyl pressing, by the by). I actually shot a cool little video of it on Erika's phone when mine ran out of room at the Railway, but we haven't quite figured out how to upload it yet, there have been some complications, so... uh... this is all I got right now!

Anyhow, I'm not in Vancouver tomorrow, have been sidelined by both a bad back and an upcoming move (a bad combination, actually). I got no other press to offer. But I wish China Syndrome a very happy gig tomorrow, and hope some of y'all check them out. Hell, I won't even be seeing the Danzig gig on Monday (I thought when they switched venues to the Commodore I might make it out but it just can't be done. I'm pretty sure it will be my last ever chance to see the guy, too!).