On the novels of Chris D., part one: Mother's Worry; plus the Hookers of Maple Ridge Part Two 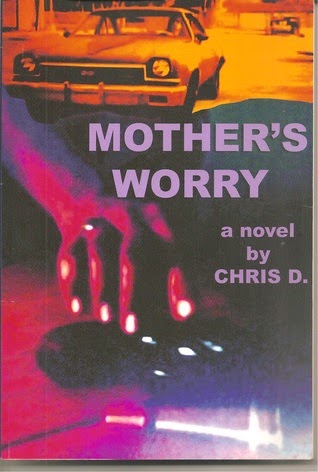 So here I am, reading Mother's Worry, a sleazy crime novel written by Chris D. My bookmark is a ticket stub from the Seattle Flesheaters show, where I got to briefly shake Chris' hand and pick up six of his novels (which he packed especially for me! Thanks, Chris!). I'm happy to report I'm very pleased with the investment. It's proving to be a great read, and I'm looking forward to reading all six of his novels over the next little while (the one he recommends as a starting point is actually No Evil Star but the first page of Mother's Worry sunk a deeper hook).

I actually wasn't entirely sure I'd enjoy Chris' writing, truth be known. It's not like I love everything he's done unequivocally. I have never really gotten into Divine Horsemen, say, and I thought his movie, I Pass For Human, was okay/ interesting but nothing overwhelming. Besides, I'm a Nick Cave fan, too, and couldn't get more than 50 pages into his first novel, And the Ass Saw the Angel, when I tried it. But Mother's Worry, so far, is totally entertaining. Violent crime story with lots of graphic gore, sex and twistedness; I'm not a third of the way through and there's been at least six murders (some graphically described);  a military brawl; a car theft; a liquor store robbery; one horny Mexican prostitute getting her pussy eaten by a gangster in the street; a multiple murder and a gun-vs-knife fight inside a brothel; and a fight inside a morgue wagon, where our antihero has been trying to hide out amongst some corpses. There's also - oh, let's see - a gay DEA agent giving a blowjob to a psycho, plus ample description of mescal, rye, and blood spattering everywhere (there's some puking, too). Oh, and our hero has just fallen off a train, covered in blood, a bag full of stolen money tucked into his pants, on a mission to confront his unfaithful girlfriend, whom he's just seen in a Polaroid sucking another man's cock. This is a fun read, maybe a little bit knowing/ winking to those of us who have digested our share of Jim Thompson, Richard Stark, David Goodis, James M. Cain, and so forth - some of Desjardin's literary antecedents... and maybe the perversity of some episodes is a little too-sick-for-realism, a little on the so-farfetched-it's-kinda-funny side, like there's a smidgen of David Lynch, too, in Chris' toolkit, where you can only just sort of grin and shake your head (and keep reading)... But all-in-all it's a deeply fun book to read. I gather the next section is going to focus on the main male character's girlfriend, who in his absence has fallen into a life of stripping, drug abuse, and maybe hooking (remains to be seen but I'm expecting it)...

Which brings me to a brief follow up to On the Hookers of Maple Ridge. One of my more insensitive posts here, maybe, but when the street I have to cross to get home from my aging Mom's turned out to be the stroll for some somewhat worse-for-wear smalltown prostitutes, it made me kind of cranky. It's enough to run the gauntlet of homeless and street crazies in the city, trying to get to and from work, each one wearing down your compassion a bit more, making you feel that much more depressed about Vancouver, its priorities, and your own selfishness. That's bad enough: I don't want to have hookers hopefully saying hello to me on a regular basis, when I'm just trying to get home. And particularly not WEATHERED ones! I mean, call me a pig if you like but if these were $500-a-night supermodel hookers I might not feel as cranky about having to visibly project my total disinterest as I walk by them; I might even feel flattered by their attention, feel something more like "as if I could afford YOU," instead of what I generally feel, which is closer to, "as if I would ever pay money to have sex with you! Give me a fuckin' break!" (I never say this ALOUD, mind you, as I plow past them. But they're probably pretty good at reading body language...).

Anyhow, I wanted to follow up that bit of prickishness on my part (pardon my recap of it). I don't LIKE myself for having that feeling, but it's there. However, after a couple of years of this, my attitude is changing a bit. I still don't want to have sex with the local working girls, natch, but I suddenly feel a whole lot more compassion for them, BECAUSE...

...I have discovered that some of them go to work BEFORE I DO. Just this morning, in fact - this very cold, dark, wet BC morning, on the way to the train station at 6:25 A-motherfucking-M, there was a workin' girl standing on the corner, hoping someone would come by. No cars anywhere on the street, and the only other pedestrians were a guy walking the other direction and a drunken middle-aged woman yelling and cursing at someone unseen as she staggered around one of the streetcorners adjacent to the local bar. At least the workin' girl in question wasn't wearing high heels and a miniskirt, she was bundled up in a parka with furry boots on, but it was still kind of heartbreaking to see her standing there so early, on such a shitty morn. I almost wanted to ask her how long she'd been there, when she'd woken up, how much money she makes at 6:25 AM in Maple Ridge in mid-January. I wanted to buy her a cup of coffee or something, except I also really do NOT want to get involved in her life, her problems, or get her hopes up that I'm going to give her money (or try, god help me, to "rescue" her), because, sorry, I'm not gonna. But the thought was there: what's the fucking point of being a prostitute if youi've got to wake up at 6 in the fucking morning and stand in the cold and the rain? Just get a job in a fucking factory, for godsake! How can it possibly be worse...?

Of course, she may not have all that much choice in the matter at present, but that's even sadder. So okay, workin' girls, I'm going to try to adjust my crankiness meter where you're concerned and cut you a bit of slack. I still am going to walk stolidly by, ignoring you, lest you get your hopes up or waste your attentions on someone who is not going to give you money, but that's meant as a sort of kindness - the most I can muster at present. I hope you're making more money than I am, I really do. Somehow I kinda doubt it.
Posted by Allan MacInnis at 11:26 PM

Someone was kind of chiding me on Facebook for not mentioning Harry Crews in the above. So: Harry Crews.