Right, so I'm entering a contest to try to get tickets to the Andrew Jackson Jihad, and I get more entries if I blog about it, so check this link for more! These guys are probably my favourite "new discovery," bandwise, mostly because they write some terrifically infectious and occasionally quite sick lyrics. I'm driving my girlfriend a bit crazy by singing lines out of context from different songs, like the image of a sky, I think it is, "as red as a dog's asshole and you see it bleeding;" or about finding a "nicer way to kill it" (from their song that is titled after humane slaughterhouse designer Temple Grandin, who pops up on two tunes on the new LP), or about blood collectors collecting blood while "the cannibals all sang," say. Plus they have two references to Bad Lieutenant: Port of Call New Orleans on their new album, including the declaration that it is the "greatest movie ever" (a bit hyperbolic by me but it is a film I'm fond of; love those lizards!). The band plays the Biltmore on Thursday and even though I work Friday I am strongly considering going. Strongly. We'll see how exhausted I am... 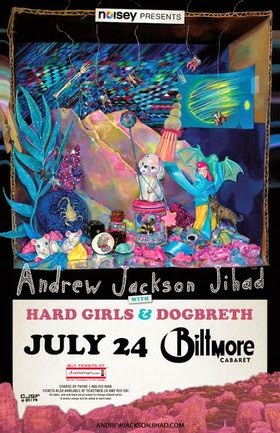 Oops - that lyric is more like something coming out of a tooth-filled sky with "eyes as red as a dog's asshole and you see it shitting." Images like this are easy to scramble up!