The Secret Doctrine: a chat with Gabrielle Rose and Patricia Gruben 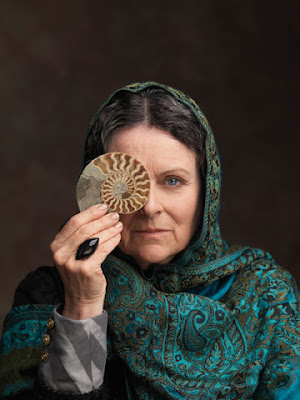 As seen in the Georgia Straight, I recently had the chance to talk with actor Gabrielle Rose and filmmaker/ playwright Patricia Gruben about their upcoming collaboration, The Secret Doctrine, which investigates the beliefs and work of influential occultist Helena Blavatsky. The play opens Tuesday at SFU Woodwards; there is also a freestanding installation called The Veil of Nature - a hands-on, multimedia display on the 4th floor of the building that combines elements of 19th century scientific inquiry with a mysterious, meditative, atmospheric mood.


The title for the installation, as with the play, comes from Blavatsky’s writings. “It’s what everybody wants - to find the design of it all,” Gabrielle Rose explained over lunch, when she, Gruben and I met for the Straight article. It refers to "the invisible realm that lies behind the frame of nature." Prompted by Gruben, Rose quoted from memory from a piece of Blavatsky's writing, incorporated into the play: " ‘one by one, the forces in nature’s workshops are accepted into the exact sciences, while mysterious help is given to certain individuals in unraveling its arcana… in a few years, a rent will be made in the veil of nature, and material science will receive a death blow.’”
“She wrote that in 1889,” Gruben added. “In 1896, I think, the X-ray was discovered. In 1897, the electron. 1905, quantum theory… within ten years, the whole think cracked open, in terms of the way people thought. People had thought atoms were little bits of matter, and then suddenly they realized they’re not only divisible, but they’re not strictly matter, they’re interchangeable between matter and energy" - ideas very much in keeping with Blavatsky's writings.
One area I couldn't explore in the article, given my word count, was whether the play (which centers on a male skeptic's investigations into a powerful female) was meant to have a feminist aspect, or if Blavatsky herself was at all describable as a feminist.

Gabrielle Rose, who had discussed Blavatsky's more humanist side, laughed and said that, because "she liked to be the centre," she "was more of a 'Helenist!'"

Gruben seemed to allow that there was indeed something liberated about Blavatsky as an influential female.

"One thing that I found really interesting about her, having seen so many 19th century novels turned into films, back when I wanted to make a film out of it, was that she didn’t really use her ‘feminine wiles’ in the way that all these Henry James characters did," she said. "These novelistic women were focused on who they were going to marry and how they would get ahead by climbing the social ladder or mimicking men in some way - she wasn’t like that at all..."
Rose picked up the thread: "She was not a vain woman, which was an interesting juxtaposition to her desire to be the centre of attention. She wore dressing gowns and she smoked 200 cigarettes a day and suffered from being overly overweight, and she wasn’t really into what she looked like at all..." 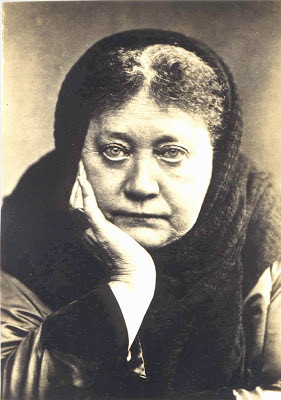 Indeed, I said - thinking of photos I've seen of her - there was something of the Russian peasant to her.

"That’s what people would say," Rose nodded. "They’d see this stout woman who looked a bit like a Russian peasant and then she’d look into their eyes and they couldn’t remember what she looked like, other than her eyes - she had the most mesmeric eyes. Big blue eyes."
Rose shares with Blavatsky an intense gaze, but her eyes are brown, not blue. The posters for The Secret Doctrine tweak her eye colour, but Rose will not be wearing contacts or such to change her eye colour as she acts ("from a distance, I don't think people will know.") As for the question of weight,  "We decided not to plump me up," Rose explained, "but the costume we have is many layers, so it gives me quite a lot of girth…"
As the Straight article explores, Gruben and Rose have considerable respect for Blavatsky, as well as healthy skepticism about some of her stunts. Rose used both the words "honorable" and "fraudulent" in describing her character, and laughed when I asked her if it was difficult for her to play someone she had such contradictory feelings about, saying, "How do I stand on the fence? I'm a Canadian, come on!" Gruben had said - as quoted in the Straight - that her own mixed feelings about her subject matter (skepticism versus belief) were a driving force behind the play; I asked Rose as well, to weigh in on her feelings about the New Age.
“Do I believe everything? Absolutely not," she replied. "I was extremely skeptical as a young woman. As I’ve gotten older, I’ve seen many things which confused me, in my life, which someone might say were miracles or wonders. So my mind is a little more open...”
As for Blavatsky, she thinks she “was all things: fraudulent, and at the same time extremely gifted as a human being; she must have been!” Both sides of Blavatsky's nature will be explored in the play, which runs July 2nd-6th at SFU Woodwards.
Posted by Allan MacInnis at 3:30 AM

Great text, what an amazing actress!