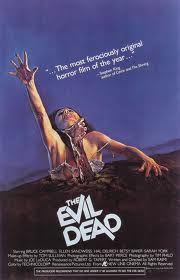 The new Evil Dead movie, out on video yesterday, turns out to be pretty good. I suspect that there are a great many people who were fans of the original who, like me, didn't bother seeing it theatrically. There are good reasons to have missed it, in fact, that have nothing to do with its quality. Before I consider why they should check out the film regardless, now that its out on DVD, let me speculate on a few of the reasons it probably didn't get the audience it deserved.

First and foremost, there's no doubt that a lot of viewers are sick of remakes, particularly where cult and horror films are concerned. Other than the totally respectable Rob Zombie Halloween films, there have been very few interesting ones, many (Texas Chainsaw Massacre, Friday the 13th, Death Race, I Spit On Your Grave, Last House on the Left, Total Recall) seeming unnecessary in a world with easy access to the originals, as they add nothing particularly exciting (bigger budgets, better effects - but so what?) to the films and franchises they exploit, offer no new ideas or insightful elaborations on their source material, frequently lack the audacity and courage of the originals, and in the end seem more like transparent attempts to separate young people from their money than labours of love, fandom, obsession, or sincere derangement (as was generally the case with the original films). Each time another one comes out, it's like you can smell the producers' thought process from miles away: "Hey, this is a small budget movie with a huge cult following, and no one has remade it yet (or no one saw the last remake); if we remake it, and amp up the effects, we can cash in, because everyone who loves the original will come see it!"

At some point, as a cinephile, you want to stop co-operating with that logic, want to draw the line, say "count me out." Who needs to spend money on a lazy cash-in that takes as its first premise that you are not that discriminating about the films you watch, that you're easily duped, that, as the Dead Milkmen once put it, you'll dance to anything? 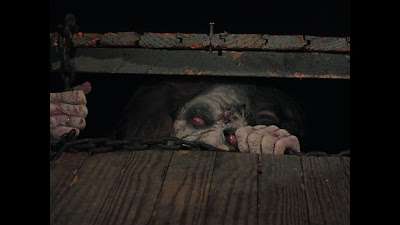 Plus - I can only speak for myself, here - my fondness for the first Evil Dead film (henceforth The Evil Dead,) which I loved when I was 13 or 14, has not travelled so well with me into adulthood. I loved it plenty back then - saw it  twenty or more times on VHS as a teenager, in various social settings (alone, with friends, at parties). But part of the reason I watched it as often as I did was that I only actually HAD ACCESS to a couple hundred horror movies in Maple Ridge at that time; there weren't THAT many video stores, and not many horror movies in them, which made it a much bigger deal to all of us. The Evil Dead was the goriest kid on the block, back in 1981, which every new friend you made had to see. 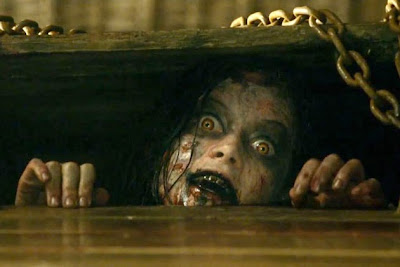 The world (and our access to movies) has gotten a lot bigger since that time - even here in the suburbs. There are a lot more movies at our disposal, and wouldn't you rather see some gorefest you haven't seen previously, rather than revisit the same old tired "classics" time and again? I mean, it's more understandable if we're talking about younger viewers, but someone who did The Evil Dead justice in the 1980's who still needs to see it more than once every few years is either not looking very hard for film fare, or has something wrong with them - OCD, demonic possession, etc. That's not to knock the film - the simplicity of the text is actually a good feature, since it's about as archetypally pure a distillation one can find of its formula - but it limits the number of times you can return to it for something new. You see it twenty times in your teens, and really - you've gotten about as much from it as you're going to get, ever; by the time of the 1987 sequel, Sam Raimi himself was mocking the original, playing with it, chuckling...

Given all the above, it's entirely reasonable to have questions. How necessary is the 2013 Evil Dead? Do I really need to see it? What can it possibly add to my life? Even if it's a good remake, does the world need a good remake of The Evil Dead? And given the state of cinema and the nature of remakes, how good could it possibly be? 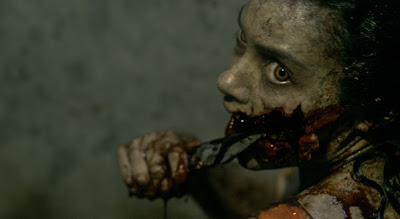 While the answers to the first few questions are open to debate, it turns out that the answer to the last one is: pretty good! The best stuff is at the beginning - they insert some interesting psychology into the "cabin" scenario (a girl is brought there to kick heroin by her brother and committed friends who want to help see her through withdrawal; this allows the filmmakers to riff on parallels between addiction and demonic possession, which is cleverly handled). They also create some believable backstory for the brother and sister that they're able to exploit in the last act (he abandoned her when their mother was dying and cannot abandon her again and keep his self-respect).  And they build up to the possession stuff with craft, care, and patience, playing things pretty much straight and sincere throughout, as if The Cabin In The Woods had never been made. The film is wise not to smirk at itself, or at least not very often. Not all of it is perfect - the illustrations in the "evil book" look like they come from a contemporary graphic novel, and not an ancient occult text - but there's enough craft and care and creativity on display that the film manages to suck you into its world, no matter how jaded you are.

Once the gore kicks in, alas, Evil Dead (2013) becomes less engaging, perhaps because 40 minutes of gore is simply not as satisfying a meal to the savvy film consumer as it once was. We know, nowadays, that you can show pretty much anything you want onscreen, so you have to do something pretty outrageous or disturbing to actually get attention with a gore effect - something that hasn't been done before. The film tries on a couple of counts, and wins respect for making an effort and not flinching. One new gore idea, involving an Exacto knife body mod that immediately got me thinking of American Mary, stands out as pretty cool. But part of the charm of the first film is that its gore effects were pretty asinine - I mean, they use PLASTICINE for one sequence! It's nice that the filmmakers pay homage to the original a few times (in scenes involving shotguns, chainsaws, and tree branches), but the world already has the FIRST Evil Dead film for that sort of thing, and simply improving the effects is not the same thing as bringing something new to the plate. Finding new and unusual ways to mutilate bodies falls well below finding new and unusual REASONS to mutilate bodies on the list of things that horror films today need. Once the young people start killing each other, some part of the brain goes on hold and waits patiently for the story to return...

It does so nicely, which is ultimately why I'm recommending the film; it crafts a new ending, fit for its characters, and resolves things on a fairly satisfying note. As remakes go, Evil Dead is one of the better ones - it would be a good film to watch with the friends you saw the original with in the 1980's, if any are still in your social circle (none are in mine; ah, well). 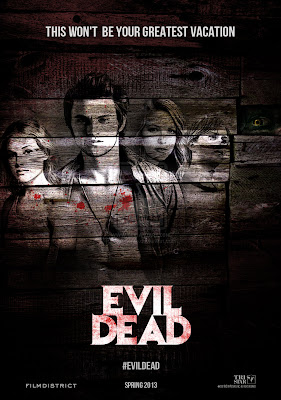 Posted by Allan MacInnis at 3:11 AM