The Monster Squad, plus I Declare War 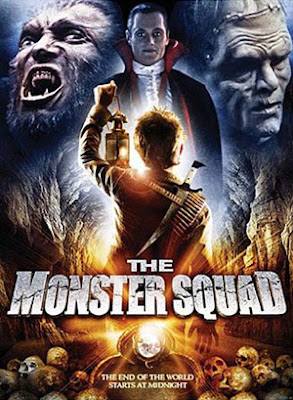 I`m a stranger to the cinema of Fred Dekker, but based on a chance encounter with The Monster Squad last night, I want to see more! What a charming film: a group of kids - mostly boys, with one tagalong little sister, who proves vital to the plot - form a club devoted to the appreciation of monster movies, just as (what timing!) pretty much every Universal monster of note converges on their small American town under the direction of Count Dracula, who is on a quest for a mystical amulet. Soon the kids are battling the monsters, with help from a couple of teenagers and the reluctant father of one boy, who fortuitously happens to be a police officer. The film is more comedy than horror film, but still comes across as sincerely fond of the horror movies to which it pays homage, and plays its improbable story at least somewhat straight; it doesn't allow you much choice but to accept that the creatures in it are real, even while they're transparently the stuff of cinema, even to the kids in the movie. It's innocent enough that you'll want to go along with it; even my 85 year old Mom, who is no fan of horror cinema, was won over. 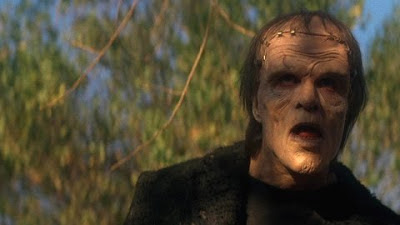 You`ll get a sense of how delightful this movie is if I describe a few high points: in the course of the film, the Creature from the Black Lagoon surprises a kid about to snack down, resulting in a line of dialogue to the effect of, "the Creature stole my Twinkie!`"; the Wolfman gets kicked in the nuts (inviting the timeless observation, "Wolfman`s got nards!"), and, best of all, Frankenstein's monster - played by Tom Noonan! - gets to redress his troubled history with little girls. (I won't ruin one of the funnier scenes by getting into the fate of the Mummy). This is a sweet, sweet film - maybe a little too scary and a little too real-world for children under the age of 10 (there are some scenes of bullying, a bit of profanity, and some scenes of kids getting traumatized that might be a concern for less permissive parents); but for any adult who loved horror movies as a little kid, it's a nostalgic, entertaining, innocent delight of a movie. Highly recommended! A similar real-world depiction of the way children talk and think is found in a film upcoming at the Vancity Theatre: I Declare War - an inventive Canadian feature involving two teams of kids caught up in war games with each other. Without being a downer, or particularly violent, the film captures how cruel and manipulative kids can be towards each other, with striking scenes of bullying and betrayal and fantasy violence (one kid in particular likes to imagine exploding his enemies with the power of his mind, which the film rather playfully visualizes for us). It's lighter and more fun than Battle Royale or The Lord of the Flies, and I agree with the review quoted on the Vancity theatre website, from Renn Brown, which favourably compares it to The Hunger Games, saying it "says more with less." It's certainly highly entertaining, has some terrific performances from its child actors, and has a great animated title sequence, to boot; I appreciated it more as entertainment than serious parable about warfare, group formation, or human psychology, but probably quite a bit could be gotten out of it, on that level, as well... 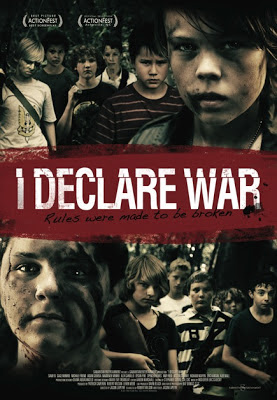