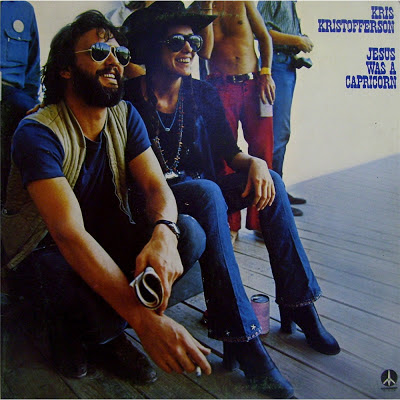 Yeah, so: this summer, Black Flag is coming to Vancouver (with Ron Reyes on vocals and Greg Ginn on guitar), and I sure do want to go to that.

Black Sabbath is coming, too, and I'd like to go to THAT, as well.

But you know who I'm REALLY excited about seeing? Seriously, folks: Kris Kristofferson, playing July 13th at the Red Robinson Show Theatre. That's a gig I'm not going to miss; I've been eagerly awaiting Kristofferson's next performance in town, and just now, seeing it announced on SongKick, I gave a little yelp of "Yes!" I am really, really keen on this, may even try to talk to the guy, because I've been - no foolin' - listening to a lot of Kris Kristofferson lately, and he's fucking great.

Nevermind that he's acted in some pretty bad movies (like, uhm, Blade) -- his film career, despite occasional work with John Sayles, has never really recovered from Heaven's Gate. Don't get too worked up, either, that he has recorded with the likes of Barbra Streisand (?! - tho' I haven't ever heard that stuff, and don't want to), and that his brushes with the mainstream have sometimes left a bit of, erm, residue on his sleeves; this is a man who, in various capacities, has worked with Dennis Hopper, Sam Peckinpah, Martin Scorsese, Bob Dylan, Johnny Cash, and who even had a song covered by Elvis Presley (and another by Janis Joplin). As mixed a bag as his film career might be, one of his performances, as Billy the Kid in Pat Garrett and Billy the Kid, is indelibly etched in the minds of anyone who loves American cinema of the 1970's, as perhaps the single greatest, most iconic, most moving characterization of a famous American outlaw, beating the shit out of Brad Pitt as Jesse James, or Johnny Depp as Dillinger, or pretty much any other outlaw-as-folk-hero you can name. (Cisco Pike is pretty great, too). 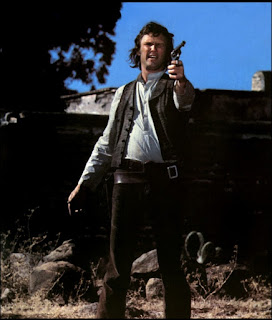 But never mind his acting roles: Kristofferson is a songwriter first, and has written songs that are at the very least the equal of some of the best works by Leonard Cohen, Bob Dylan, Tom Waits, John Prine and Johnny Cash - all people who have experienced substantial surges of interest (and even devoted fandom) from younger folk in the last couple of decades, while Kristofferson seems to be going mostly unnoticed. It's well past time that that changed.

The song of Kristofferson's that first got its hooks into me is a song that was initially inspired, as he explains in his spoken intro, by Dennis Hopper, "The Pilgrim - Chapter 33." This is the song that Betsy quotes to Travis in Taxi Driver - the one about Travis being a "pilgrim and a preacher and a problem when he's stoned" (Travis objects to the line about being a pusher, though). To be perfectly honest, it was that detail - the connection with the film - that got me into the song, initially, somewhat to my embarrassment, because, throughout my teens and twenties and, um, thirties, and maybe even the first couple of years of my 40's, I mostly thought of Kristofferson as a purveyor of light adult contemporary kitsch, suitable more for dentists' offices and AM radio than my record collection. He made music I might listen to while playing Scrabble with my parents, as a preferred alternative to say, Charley Pride or Tom T. Hall or Roger Whittaker or Engelbert Humperdinck or other favourites of theirs, but in my free time, for most of my life, "The Pilgrim - Chapter 33" was about the only song of Kristofferson's that I had any time for. I had a greatest hits album of his around solely for the sake of spinning that one track now and then. It didn't matter if it was the only song of Kristofferson's I could listen to; I loved it, as would surely anyone out there with any love of roots music or raw, real country. What they might not realize, though - I certainly didn't - is that there are a ton of other equally great or better Kristofferson tunes, and that the intelligence, wit, authenticity and charm present in that song are spread liberally across several albums by the guy - so much so that even the kitschier stuff starts to grow on you if you let it. 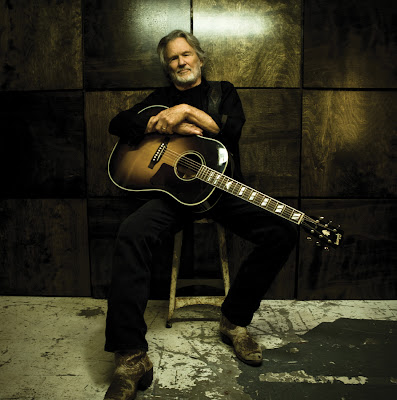 For instance, try "Jesus Was a Capricorn (Owed to John Prine)" - a song that is funny, clever, wise, and tuneful, without so much as a spoonful of that ol' AM radio syrup on it. On similarly anti-authoritarian themes, again with some real wit to it, see "The Law Is For Protection of the People," which also shows off his storytelling abilities. Or check out his playful variant on "Bringing in the Sheaves," "Blame It On the Stones," which should be some sort of classic, commenting on middleclass and media hysteria about rock music, some fifteen or twenty years before the PMRC; I was stunned, when I heard it for the first time last year, that a song THAT good hadn't ever crossed my path before.

Of course, many of Kristofferson's songs are about relationships and, uh, love, that tritest of trite topics, so worn paper-thin by country and folk and rock musicians alike; but even those songs often have a wry, self-skewering quality to them to them, with the singer simultaneously asserting and critiquing his own sexuality, in a way not that different from the one frequently employed by Leonard Cohen (but with less solemnity or self-importance). Case in point, check out the Latin-inflected number, "The Taker." Is there a man out there who doesn't recognize part of himself in that song? ...even if it's a part you don't like much (relax, you don't have to admit it publicly). "The Silver-Tongued Devil and I," from the same album, does similar things, and may even be a better song still.

There's marvelous stuff that Kristofferson can do with words, too. Check out the opening lines of "Breakdown (A Long Way from Home)," for example:

Look at the density of the rhymes, the use of alliteration - especially that brilliant, playful "nobody nobody knows," but also the "clubs" that are "closed," the "ladies.... leavin'," the "stranded souls standing" at the "station," and the "but to bed." The rhyme between "streets" and "sleep" is perfect, but based entirely on the vowel, not the final consonants. And look at the way the "nowhere" in the final couplet echoes against the "nobody" previously. There are a lot of devices packed into a very short space, yet it still comes across as un-forced, laconic, spare and straightforward; it should sound like a nursery rhyme, like a self-conscious bit of wordplay - the form should distract you from the content - but because of Kristofferson's relaxed delivery and the vividness of the images he crafts, you accept it as description and enter the song effortlessly, without even registering how much craft he's packing in; you might smile at the "nobody nobody knows," but the rest of it probably won't even catch your attention the first time through. That's some great writing, folks, and similar feats are present throughout all his early albums (and perhaps many of his later ones; there's a lot I've yet to hear).

I haven't any arguments that will convince you of the brilliance of the following songs, if you're not already with me, but if you have the time for more, check out "To Beat The Devil," which really runs with his love of spoken introductions, or, say, "Gettin' By, High and Strange," and even "Sunday Morning Coming Down" - which, perhaps, is the gateway drug to the less immediately palatable side of Kristofferson, for folks like me; once you accept it, soon you'll be humming along to "Why Me, Lord." I confess that I've gotten to that point, and beyond; I pretty much accept any and all of the songs this guy does on the albums I've heard, so far (though as I say, I have avoided any involving Barbra, and intend to; and I wasn't really grabbed by the side of the collaboration with Rita Coolidge I spun a few months ago). All the same, I'm convinced that Kris Kristofferson, whatever detours and silly films and shirtless publicity shots his career may have featured, is, in fact, above all else, a neglected American songwriting genius vastly deserving more respect and attention than he currently gets.

If you won't take my word for it; take Mr. Mojo Nixon's, who describes him here as "one of the greatest songwriters of all time," while introducing a performance of Kris' new song "Feeling Mortal."

Kris Kristofferson is coming to Vancouver this summer, and I'm very excited. I've never seen him live yet, and I need to. Seriously, folks - check this stuff out.
Posted by Allan MacInnis at 1:38 AM

He was also good in Alan Rudolph's "Trouble in mind".

Thanks! I don't know if I've seen that one - my Alan Rudolph consumption is pretty spotty, and may have occurred entirely back in the days of VHS! I'll see it if I can...

Great article. Kris Kristofferson really is a great songwriter and it's good to see the detail and depth of your appreciation of his songs!