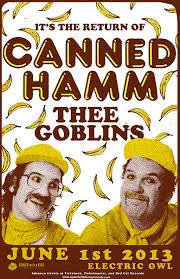 The closest I ever got to Stephen Hamm was back in the late 80's, when I saw the fabled Vancouver band Slow opening for the Cramps. I vividly remember bassist Hamm's meaty, hairy thighs, disturbingly visible through a slit in the nurse's uniform he was wearing (it's funny what you retain from a gig; I recall nothing else from that show as clearly). A few years later, I saw his subsequent band Tankhog, at the Cruel Elephant on Granville, but that's a gig I have only the vaguest memory of. Other than that, I know he and I have been in the same movie theatre now and then (because if you're someone like me, you can't help but notice when Big Hamm is in the room); but I can't say I know the guy at all.

However, I chatted with Robert "Little Hamm" Dayton a bit around the time of the release of the last July Fourth Toilet album, collecting material for an interview that never saw print. I had never really moved in his social circle and didn't really know what to make of him, exactly; the one July Fourth Toilet gig I saw was perhaps one of the most confusing, fascinating, unclassifiable musical experiences I have ever had (and also highly entertaining, largely because it WAS so singular). It is entirely possible some of his humour goes over my head, or perhaps crawls under my feet, or slithers between my legs (like his Canadian Romantic series, say: there is definitely some brilliance to the way he says "Canada spreads and opens," in that clip, pausing before he completes the phrase, but something about the experience still makes me want to flee it as quickly as possible. Is it an irony overdose? An inferiority complex - I fear I won't "get" it? Is he somehow intellectually, morally, or sexually threatening to me, by some complex mechanism I do not understand? I dunno, but these clips kind of freak me out, no less). All the same, Dayton once gave me a Harry Partch album, which is the sort of gift you don't get from everyone who passes through your life. (I later Paid It Forward and, getting a better copy of the same Harry Partch LP, gave the one he gave me to the Minimalist Jug Band). And for awhile back there, I learned to love and admire July Fourth Toilet Presents Balls Boogie Featuring Me and Bobby McGee - check out, for a ridiculously hard-rockin', oughta-be-a-Can-rock classic, the song "Kentucky Whore," where Dayton sounds strikingly like Joey Shithead...

In any event, I am happy to see that Dayton, who has been in Toronto of late, is returning to Vancouver for a Canned Hamm gig, occuring this June 1st (the same night as the SNFU listening party). It may seem a shocking shortcoming, but in truth, I have never seen Canned Hamm play live. I have at least one of their CDs, but I'm kind of afraid to listen to it, because I fear they will confuse and unsettle me in the same way the J4T gig did (or else that they will just annoy the heck out of me, or maybe both at the same time). Brief peeks at them on Youtube make me think of Barney the Dinosaur as filtered through the sensibility of John Waters. Since seeing them live has gotten to be a rare thing, I would certainly LIKE to be at the Canned Hamm concert Saturday, and amend my lack of experience, here, or at least decisively resolve whether I love them or dread them, but as things are, alas, I probably won't even be at the SNFU Listening Party... I will be in Maple Ridge watching a movie with my mother, like I am almost every weekend these days...

All the same, welcome back, Canned Hamm! I am glad you still exist, even if I have not yet chosen to experience you! I hope your audience is so big and appreciative you don't even miss me! Go work that Canned Hamm magic! Blessings! Joy! Peace!
Posted by Allan MacInnis at 12:50 AM

Don't be scared, sir! ;)
it'd be nice to see you!
I love the honesty of your writing! And, hey, if total emotional exposure along with a search for truth is irony then I am guilty as charged.

Allan, get out of the house.

Oh, believe me, I get out of the house! But how's this: if I can get a date, I'll be there. I should see Canned Hamm ONCE, right? (I will endeavour NOT to prepare myself, however - I will be a Canned Hamm virgin, ripe for plunder and bewilderment).

Oh, and Allan, I have put out a long lost vinyl LP by Julian of July Fourth Toilet, Dan Bejar, and myself called Points Gray and we are launching it Friday night at They Live Video with Sipreano spinning and a midnight candlelight recitation by The Canadian Romantic!

Canned Hamm! They are wonderful, sweet, generous princes of en'tainment. Allan! Bring your mom as your date.