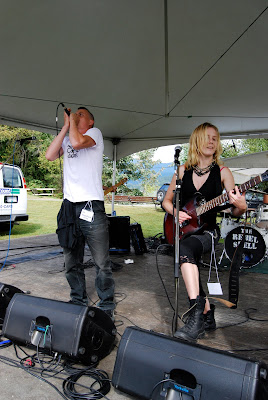 The Rebel Spell at Under The Volcano, photo by Femke van Delft. Not to be reused without permission.

You probably wouldn't know it, unless you belong to the Ridge Radicals Facebook group, but the Hammond United Hall - actually the Hammond United Church Hall, but the word "church" just isn't punk or metal enough, I guess, so it's routinely effaced, which I find rather amusing, particularly since the result suggests, say, a Hammond pro soccer team or something - will be hosting The Rebel Spell this Sunday evening, July 11th. They're "my favourite Vancouver punk band whose members are under 40"; they have great songs with smart political lyrics; and I did a highly entertaining Razorcake interview with them once, back when bassist Chris was still in the band. I have all their releases (and am most eager to hear their new CD, whenever it actually sees the light). If you like punk rock, you can't beat this band - they've toured aplenty, are signed to G7 Welcoming Committee, seem pretty sincere in their political beliefs, and they've got the chops - they opened for Bad Religion at the Commodore and God-knows-who-all else...
Somehow, still - I feel kinda weird about going. While a show at the Cobalt (RIP) would be attended by at least a few old fucks like me, the only people who go to gigs in Maple Ridge are apparently still in high school - it's a youth scene, and I don't really relish the "some weird old guy" feeling I get at such places. If there ARE people my age at the hall, I will eye them suspiciously, and probably receive their eye in return. Still, what the fuck else am I going to do on a Sunday night in Maple Ridge? Grr. 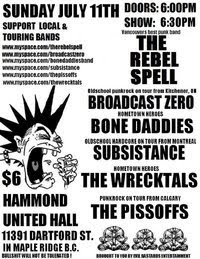 Posted by Allan MacInnis at 3:03 AM

'Twas A good show
The Rebel Spell is amazing