Spring arthouse fare in the city 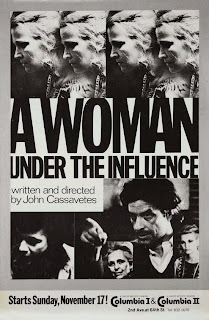 By far the most exciting upcoming screening for me is the restored UCLA print of John Cassavetes' A Woman Under The Influence, happening at the Cinematheque next Saturday. I'm in full agreement with Jonathan Lethem, in his Granta article - reprinted in the Criterion Cassavetes box - that for the true Cassavetes-phile, Husbands and Love Streams, the films where the director is most present in front of the camera, are the real gems of Cassavetes' canon, since they give a firsthand taste of Cassavetes' character, as well as his art - but, as Lethem also observes, Faces and A Woman Under The Influence - neither of which feature even a walk-on by him - are probably his greatest artistic achievements, his most perfectly executed films. And though Faces' rough-hewn, dizzyingly energetic handheld aesthetic makes it an unforgettable and inspiring experience (as depressing as its content may be) it's probably A Woman Under The Influence that makes the best introduction to Cassavetes' work, or at least the safest point of entry - if we can call a film like this "safe;" it's a powerful emotional experience, but has a recognizable level of craftsmanship that makes it a bit less likely to scare weaker viewers away, since you sort of sense that things will remain, harrowing as they get, within certain parameters of control. This further makes it impossible to regard the film (as has been done with others of Cassavetes' films) as "self-indulgent" or chaotic, which is a good thing; it's nice to have a film to point the nay-sayers to. Gena Rowlands, as Mabel Longhetti, gives a rather scarily intense performance as a woman driven to great emotional extremes by the pressures of family life, and Peter Falk probably never had a better role as her somewhat brutishly working-class husband, whose attempts to keep his wife from spiralling out of control often have the opposite effect. Careful viewers should note that not only is Katherine Cassavetes present in this film, as the stern Longhetti matriarch, but the filmmaker's father, Nicholas John Cassavetes, makes a bit appearance as Adolph. (It's a pretty loaded name to give your father's character, eh?). See Ray Carney's online essays on it for more about the film, and note that the title of the doc about American cinema in the 1970's, A Decade Under The Influence, borrows from this film, which should give some sense of its landmark stature. Still more on its background as a self-distributed film, and an amusing anecdote about Richard Dreyfuss' reaction to the film, can be found on its Wikipedia page.

There are other noteworthy screenings in the UCLA restorations series - including John Sayles' delightful The Brother From Another Planet and Edward S. Curtis' In The Land Of The Head Hunters, about the Kwakwaka’wakw of Vancouver Island (featuring a staged but, I gather, fairly authentic potlach). In terms of other programs, I look very much forward to seeing Inferno, about Henri-Georges Clouzot's final, unfinished film, but direct you elsewhere for information about it. There's not a lot else I've seen or have opinions on at the Cinematheque, but the Dutch film Can Go Through Skin - a favourite of more than a few people at the last VIFF - is a compelling, almost disturbingly close-up portrait of a psychologically traumatized female that may appeal to some followers of this blog.

As for the Vancity Theatre, see below for my comments on The Neil Young Trunk Show.
I had a hard time with the much-praised Quebec film I Killed My Mother - given recent family history, I really didn't want to watch a snotty young kid verbally abusing his Mom. More to my taste - tho' still not quite my style - was a gentle, elegant, and rather quiet Italian film called Mid-August Lunch, which shows a middleclass loafer with a passion for food and wine suddenly entrusted with the care of four senior citizens (including his own mother). It's got a quiet wit to it, and bears utterly no resemblance to the film Gomorrah, also written by the director/star of the piece, Gianni Di Gregorio; prepare yourself for a very low key film, if you check this out. There will also be two presentations of note, a Cinema Salon presided over by Vancouver cinephile, patron of the arts, and theatre owner Leonard Schein, who will be introducing Woody Allen's Annie Hall; and the art deco musical 42nd Street, presented by Dal Richards. Vancouver documentarian Chris Gallagher's Time Being sounds promising, too, but I've yet to see it...
Posted by Allan MacInnis at 9:49 AM