(Re)birth of a metalhead 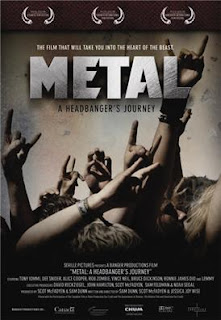 After childhood forays into country music (following my parents' tastes) and radio-friendly pop (my Billy Joel years, back in elementary school), the first form music that I actually took to as an expression of my identity was heavy metal. Back when I was too young to get into clubs, "live music" meant, generally, seeing a big rock act at the Pacific Coliseum. As a teenager, I saw Black Sabbath (on the Mob Rules tour, with Ronnie James Dio), Judas Priest (on the Screaming For Vengeance tour, back before Rob Halford gave a hard jab to his teenaged fans' homophobia and came out of the closet), Iron Maiden (I think touring The Number Of The Beast, but perhaps slightly later, with a giant dancin' Eddie onstage), Van Halen (touring Diver Down - the "Lock Up Your Sheep" tour, as I recall), the Blue Oyster Cult (twice, with the big mechanical Godzilla), and a dozen lesser-known bands like Saxon, Krokus, and Fastway (with Motorhead's former guitarist, Fast Eddie). Also caught metal-inflected stadium rock acts like Rush and Styx. Before I owned a single punk album, I had dozens of metal albums - even the recently-revitalized Anvil's first release! When I first heard the Sex Pistols' Never Mind The Bollocks, around age 14, it seemed quite compatible with metal: loud, rude, and rebellious, and played on the same basic instruments - only more aggressive, and a tad more concise. The two genres coexisted in my collection for quite some time, though, without my ever feeling that I would someday have to choose between them.

Within a couple of years - by 1984, say - I had given metal up and sold off most of my metal LPs. There were various reasons: lyrics I often found repugnant to my growing leftist/pro-feminist political consciousness, from perceived misogyny (say, in a song like AC/DC's "Squealer," which I remember interpreting as a kid as being about so traumatizing a woman through violent sex that she'll never have sex again, which the singer gloats over) to overt racism (such as that of SOD's Speak English Or Die period, tho' I'd abandoned the genre by the time that disc came out). I felt a growing distaste for the macho swagger of the bands, too, and was greatly affected by the "tribal division" between punks and metalheads, which generally saw the latter turning on the former, with the perverse and hypocritical logic that sometimes makes one minority grateful to have an even smaller minority to persecute and distinguish themselves from (punks, howevermuch we sneered, didn't go around beating ANYBODY up, but headbangers sure did like to turn on us). I vividly remember an experience in my teen years, walking home for lunch from Maple Ridge Senior Secondary with a tinny little Realistic tape player blasting The Exploited's "God Saved The Queen," with, as I recall it, a faux-hawk fin on top of my head, and one of my dad's jail-issue olive drab jackets on over a prison workshirt - a getup that I intended as a commentary on the institutional nature of high school - when I felt something pelt against my leg; I turned around to see that the assorted longhairs who had gathered in a nearby park to smoke up were throwing rocks at me. I would wring an amusing anecdote from this for years to come - I was stoned by stoners! - but, even tho' the rocks mostly clattered on the pavement at my feet, the experience hurt and puzzled me. Repeatedly being sneered at by people in Led Zep and AC/DC t-shirts led me to purge those elements from my record collection, as with anything else that seemed metal, with only one or two exceptions (Motorhead's Iron Fist, the first three Blue Oyster Cult albums, and, when they came out, the first two Danzig records, which I counted as guilty pleasures for years). Punk served all my needs for rebellion and catharsis - and punk just wasn't as flat out stoopid as some of the metal stuff out there; by the time Motley Crue released Shout At The Devil, I held metal in a fair bit of contempt. When the big "crossover" blurred the genres in 1987, I remember being distinctly disappointed to see bands like DRI, Suicidal Tendencies, and Bad Brains adopting a more metal-friendly approach, which may have won them a wider audience - but seemed to involve a deal - or at best a compromise - with the devil. What had seemed natural to me at 14 (metal and punk's compatibilty) seemed deeply questionable in my late teens and early 20's, so gross had I found the behaviour and attitude of high school headbangers; those early experiences stuck, and up until last year, the only metal I would go close to was, as before, Motorhead, early BOC, and Danzig (tho' I guess the couple of Tool CDs I picked up count, too).

Something, somehow, has changed. Incrementally, I have been led back into the fold - walked slowly there by a variety of experiences that wore down my resistance, from being rather tickled by Thor's goofy, costume-rich performance at the Scratch birthday celebrations a few years ago to rediscovering the amazing guitarwork on "Hallowed Be Thy Name," as played instore at HMV when the Iron Maiden doc, Flight 666, came out. Jello and the Melvins' cover of Alice Cooper's "Halo Of Flies" helped, as did the rest of the Melvins metal-friendly discography (they play the Rickshaw in June, I believe it is, btw). Spending some time with a couple of Marilyn Manson discs helped. Interviewing Lemmy and Bison BC helped, with live shows by Motorhead and Bison being the first metal-related music I'd gone to see by choice in about 25 years. Jamie Saft's Jewish black metal album on Tzadik helped. Talking to people like Harlow of Funerary Call and Sistrenatus and Ross Birdwise of Ejaculation Death Rattle - both of whom have a fondness for metal - played a role, too. And Sam Dunn and Scott MacFadyen's two great anthropological surveys of the metal world, Metal: A Headbanger's Journey and the even-better Global Metal, were crucial in tipping me over the edge; suddenly, I have a craving for metal I cannot suppress.
I still think about 3/4s of what I hear sucks, mind you - I'm fussy and not all-embracing in my plunge, and find myself saying "nah" to a lot of what I spin, as being too cliched, too conservative, too operatic, too simple, or too silly. Reading about some of the "Black Circle" behind the Norwegian church burnings in Lords Of Chaos, I have to roll my eyes at the psychology of the players, who take themselves way more seriously than I am able to, basically seeming to be caught up in the basest of male competitive behaviour, trying to outdo each other on the field of evil rather than the astroturf ("jocks in corpsepaint" - tho' the fact that certain of the folks on that scene, like the murdered Euronymous and Gorgoroth/God Seed singer Gaahl were/are either bi- or gay does seem a mitigating factor; there's something about a Satanist being gay that makes it much more understandable and sympathetic). Still, the things I say YES to I'm saying yes to in a big way: Sepultura, Soulfly, Melechesh, Gorgoroth and the Golers are the bands I'm most excited by at present, with some Swedes lingering on the fringes (Amon Amarth, Entombed) and a Cradle Of Filth album that is definitely growing on me. I have even - gasp - re-purchased Alice Cooper's Killer and Iron Maiden's Number Of The Beast, and am contemplating actually SEEING Maiden and Alice on their tours here (the former at GM Place, the latter at the Pacific Coliseum with Rob Zombie). I'll definitely be checking out Soulfly, March 30th at the Venue. Maybe moving back to the suburbs and having undergone some difficult life experiences of late has something to do with it too, or maybe it's some sort of weird mid-life crisis, but much to his surprise, this old punk is suddenly, at age 42, listening to stuff he thought he'd grown out of in high school. I mean, fuckin' Melechesh rock, man. What else can I say?
And since I'm in Maple Ridge now, let me mention that there's a gig tomorrow night at Hammond United Church Hall (11391 Dartford), with various ska and metal bands performing: Ninjaspy, Paradosis, The Bone Daddies, and At Times Of Madness (whose Myspace pages I must invite you to look up yourself, since my internet connection is running at Romero-zombie speed tonight). Ninjaspy will play the next night (Saturday the 13th) at Pub 340, as well, for those of you not so geographically disadvantaged as myself.
Posted by Allan MacInnis at 11:21 AM

Listening to Cooper's "Killer" in your car or on ear phones while otherwise getting around town is a chilling thing in this decade.