The Furies - "Olympic Madness" and more 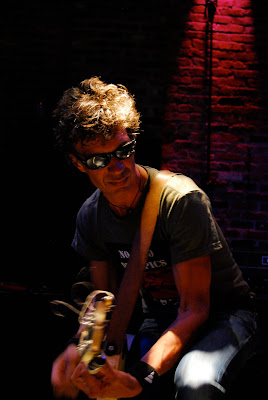 The Furies at Richards on Richards (RIP) by Femke Van Delft, not to be reused without permission

I've returned to the Music Note section of The Georgia Straight this week with a brief piece about The Furies' new anti-Olympics anthem, "Olympic Madness." In addition to being a great garage-punk guitarist and shades-wearer par excellance - the closest thing to Lou Reed this city has produced - Chris Arnett is a pleasure to interview, an articulate, generous guy whom I talked to previously here, and who has also been the subject of a gig review on my blog and a substantial Furies' interview by Kristina Mameli in issue 39 of The Skinny (not presently online that I could see, but it might pop up at a later date). While our talk about the Olympics was fairly short, there was more where it came from that I couldn't fit into the Note, about the genesis and recording of the song. 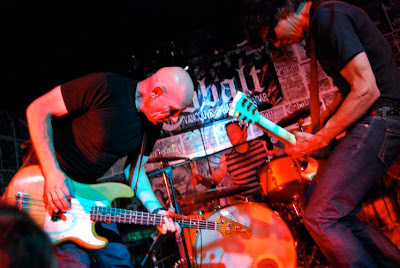 The Furies at The Cobalt (RIP) by Femke Van Delft, not to be reused without permission

"I wrote it about two and a half years ago," Chris says of "Olympic Madness." "I was talking to my son one night, and he had gone walking along the beach at Jericho and saw a homeless guy lying down beside a log. So he went off and jogged for an hour or so and came back, and there's all these parameds and cops and so on, and the guy was dead. So we talked - and this was when there was a lot of stuff in the press about hotels being shut down and people being forced to sleep outside, so I just got pissed off with that. And a few weeks later, we were driving in town and we were down under the Cambie bridge, and I saw this couple - like, the line in the song is, 'I saw a couple clutch each other in despair in the dogshit-covered grass by the side of the road in the rain and cry,' and I saw that - this couple in anguish, on a pouring, horrible night on the dogshit-covered grass of Vancouver. So when I went home, I wanted to write a song. And I also wanted to write a pop song, because I've been really stoked by the reunion of the Pointed Sticks, you know? I really wanted to do a pop song, because The Furies' songs are all sort of caustic and rock and roll and over the top. So I went home with these experiences of seeing what I feel the Olympics are doing to our city, and I put the two of them together, and I plugged in my guitar, and the song just came out like that - I did it all in one take. And then later I talked to (Pointed Sticks' guitarist) Bill Napier Hemy on the phone and said, 'we've just written our first hit single!'" 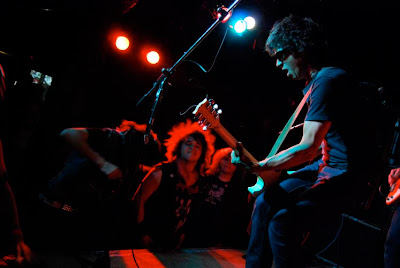 The Furies at The Cobalt (RIP) by Femke Van Delft, not to be reused without permission

Since then - two and a half years ago - the song has been performed at a multitude of Furies' shows. With the games approaching, the decision was made to record it. "We had an opportunity to go to Paramount Recorders, which is the famous studio in the Downtown Eastside run by (Pointed Sticks' keyboard player) Gord Nicholl and (Modernettes' frontman) Buck Cherry. We went in and did it in one or two takes, and then did the b-side ("Sorcery")," putting them both on their Myspace on February 1st.

Is the reason Chris put it out for free download rather than tryin' to sell it connected to concern that the Olympics trademark police might crack down? "No, not at all - we knew from the lyric that it's never going to be played on the radio! Tho' it's going to be on some podcasts and things around the world - a few different places have picked up on it. There was no way we were going to make any money on it, anyway. I don't make any money (off music) - I just got my royalty check from SOCAN, I think I got $24 for the last quarter! So we're just rolling in it - I might be able to get a case of shitty Canadian beer, for all my efforts!"
As for the Olympics, "I'm a fourth-generation Vancouverite, which I like to brag about, because there's so few of us," Arnett says. "And all I can see is, here in 2010, we have all our priorities totally ass-backwards. I don't feel like I'm in a minority" in thinking this way. "Maybe 20 years ago, if we were all sitting around, maybe we'd be all stoked about it, because it would have a different context, but in today's world, this thing is just kind of obscene! I see these ghastly ads on the buses, 'You will never be able to perform as well at so-and-so, so don't even try!' And stacks of gold at McDonalds, y'know - you're just going to get a stack of cholesterol..." (More of Chris' rant can be found in my Straight piece."
It's been far too long since I've seen The Furies play."People say we're in top form," Chris tells me. "We played at Malones a few weeks ago. Packed audience! ...My kids are all BMX'ers and rock and rollers. They're into the really cool garage scene that's in town - bands like Dead Ghosts and Indian Wars and Time Cops. These are all bands that are up-and-coming now. They're all in their 20's, and influenced by Black Lips and all this sort of garage stuff that's been big for awhile now. They all sort of hang out at the Biltmore and places like this - there's quite a scene, and they like us!" So do I! ...and I gotta hear me "Olympic Madness" live! 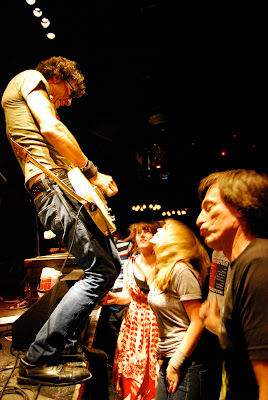 The Furies at Richards on Richards (RIP) by Femke Van Delft, not to be reused without permission
Posted by Allan MacInnis at 10:43 AM