I remember vividly hearing Roger Ebert's review of Leonard Nimoy's The Good Mother when the film first came out in 1988 (the link is to his print review, since I don't imagine I can find video of Siskel and Ebert discussing it in the balcony of yore). As a teenager, I'd seen the film theatrically on first release, and greatly appreciated it; though I hadn't the language to talk about it then, I had a taste for melodrama, and was well aware (as an inquisitive and intelligent kid) that the form could be used to explore social values, which is what The Good Mother does, with all the intelligence of the best Douglas Sirk films (tho' little of the cinematic craft or visual splendour; it's a wholly average-looking, if thoroughly competent, experience visually. If Nimoy brings a particular talent to the picture, it's in getting very honest performances from his cast, not filling our eyes with opulence). Ebert even had the temerity to call the film "confused" - as if he knew what the film was about, what it should be about, and how it should tell its story better than the filmmakers did, which seemed more than a bit arrogant of him. It stuck with me a long time, and obviously is still with me today, in part because I was a fan of his show (and still check in with his site, over twenty years later, whenever a film I'm interested in opens). It was probably the first time in my life that I fully realized the power and responsibility of a critic. Ebert seemed to completely misunderstand The Good Mother, and proceed to write a negative review of it based on his misunderstanding, which no doubt contributed to the film's commercial failure. How unfortunate for the film - and how unfortunate for Ebert, to have his own failed perceptions made a matter of public record (mind you, these were in the days when Michael Walsh, writing for The Province, called Wim Wenders' Wings Of Desire "long and boring;" but no cinephile took Michael Walsh seriously).

The Good Mother is worth looking at on several counts: as a melodrama about male-female relationships and parenting; as a query into the state of post-sexual revolution sexuality and female identity in the late 1980's; about a certain hypocrisy that surrounds sexuality in North America; and as a film about how the law can intrude into human relationships. It also has an interesting lesson to be learned about the perils of compromise. It's aged so well that I'm sure a contemporary youthful audience, seeing a character listening to music on headphones, would assume he had an MP3 player in his pocket - not a Sony Walkman, ie., a cassette player, which was still, I imagine, the popular choice for portable music players in 1988 (the discman had only been invented four years previous). The questions it asks are still relevant today, too, since little in the attitudes it documents has changed.

Without revealing too much, the story goes as follows: Diane Keaton is a "good girl" from a family dominated by patriarchal authority. She has lingering memories of a sexually rebellious and independent aunt, who died when she was young; but her own marriage - recently ended, as the main action of the story begins - has been sexless and conservative, and she is by no means a liberated woman. Perhaps in part because she has been denied it herself, she encourages expressivity and uninhibited playfulness in her young daughter, with whom she is very close; there is no question that she is indeed a good mother, and much of the first half of the film is spent getting to see what kind of mother she is. Enter a young and very charismatic Liam Neeson, in one of his first lead roles in Hollywood; he's a sculptor and a bit of a bohemian, and - as can happen in a good relationship - once things get underway, does a great deal to open his partner up sexually. We see her overcome her self-consciousness at dancing, then at what we presume is her first experience of cunnilingus, and from the horny glow that radiates from her whenever she's in his presence - and Keaton can do the horny glow very well - it's clear that she is pleased indeed with what is happening. Gradually, he becomes a part of the life of Keaton and her young daughter, working very hard to win both of their trusts, because, we sense, the relationship is just as important to him; he's a good man in love with a good woman, though their relationship is not without its bumps. In one key scene, he challenges her for not having a passion of her own - just a boring lab job and a mundane paying gig as a piano teacher, rather than something expressive and creative, like him - and she leaps angrily and articulately to her own defence, saying that it is in motherhood she has found her means of self-expression, creativity, her connection to purpose and meaning, and it's a chauvinist male cliche to invalidate that, to think she is somehow lacking because she's not an accomplished artist. He is chastened - but the argument serves a dual purpose for the audience, who come to appreciate, through her passionate, articulate self-defence, how important to her sense of self being a mother is to Keaton. 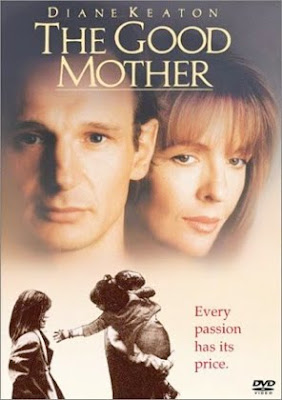 A very important scene occurs shortly thereafter, though we have no reason to realize its importance at this point: Keaton and Neeson are in bed, on about their lovemaking, when the little girl wakes up - she's had a nightmare - and as children will, she comes into her mother's room and gets in bed, where, after a few soothing words, she falls asleep. Neeson and Keaton don't uncouple, and we can presume that they may well continue their lovemaking - it's not shown, but an attentive audience would no doubt be able to pose the question of whether they might; we discover later - in court - that they did. The scene is interesting in light of what follows; Nimoy has very cleverly seduced us by showing us these images in the context of what seems a wholly healthy, indeed damn near ideal sexual partnership evolving, and I suspect most audiences won't react to these images at all, going along with the story. Even if they do continue their lovemaking, the viewer might feel - it wouldn't really be a bad thing, would it? I mean, I don't know that *I* could be so sexually unselfconscious in that situation - I feel a wee bit uncomfortable having sex if there's a cat or a dog in the room, let alone a sleeping child - but bully for them for being so un-hung-up; the scene presents the moment as normal behaviour between them, and seems not in the slightest damaging or traumatic. It becomes one of two key episodes in a custody battle that ensues, when Keaton's ex-husband gets wind of his wife's new relationship, and the rules by which it is unfolding. The other episode - which again we learn about without seeing, which, for some reason, really got on Ebert's nerves - is best left to viewers to discover, but it is of a piece with the previous - normal, wholesome, if rather uninhibited behaviour that, in later light, comes to look malign and suspect, from the point of view of a jealous ex and a legal establishment dominated by straight, patriarchal, sex-negative values.

The film asks various questions of its audience: what their values in fact are when it comes to the body and sexuality and how these things should (or shouldn't be) represented in front of children. It also asks whether, once we know what are values are, we would have the courage of our convictions to defend them against all comers. I'd as soon not say any more about it, not even to quibble with Ebert's review, since I assume none of my readers have seen this near-forgotten, seldom-heralded film, and such quibbling would be meaningless indeed. One thing I will do is invite Roger Ebert to revisit the film, to watch it with fresh eyes, and to possibly atone for his critical faux pas (it seems more likely that I'll be able to get him to rethink his position on this film than on the original Death Race 2000). Seeing Ebert in error at that time was probably very useful for me, in encouraging attentive viewing of films, so I bear him no ill will. In an odd way, Ebert should be quite proud that 22 years later, his review of this movie still annoys me...


Meantime, cinephiles looking for an interesting, emotionally-charged, provocative melodrama should check The Good Mother out. It's a DVD cheapie, indifferently dumped onto the market with the same terrible art and idiotic tagline that was on the movie poster, without commentary or indeed any extras, at $9.99; it is not widely distributed and probably not even in many specialty rental shops. However, Chapters got it in for me within less than a week, and it's probably easy to order through most chains. There are also some very skilled supporting actors, including Jason Robards and Joe Morton. Diane Keaton is at her sexiest; and its a pleasure to see Liam Neeson at work at so young an age (and to get away with speaking with his own accent, in an American film!). It's damned hard to find films this good on the shelves of most video stores these days (or at least out here in the suburbs!) - so I hope a few of my readers will jump at the invitation to see a really good movie.


I mean, who are you going to trust, me or Roger Ebert?
Posted by Allan MacInnis at 10:35 PM