Scars and memories (...in which I buy a damaged Dead Kennedys record and wax nostalgiac for my teen years) 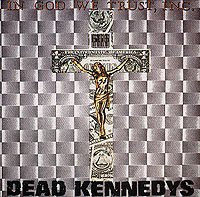 I found something really special at the Audiopile Boxing Day sale today - a copy of the Dead Kennedys' In God We Trust, Inc. Not a great album by that band, in my opinion - some of their most aggressively thrashy songs are on it, which makes it a bit special, I suppose, and there are great moments (mostly on side two; "Nazi Punks Fuck Off" is indubitably a classic, and I must admit singular fondness for the "Rawhide" cover), but most of it's too aggressive for its own good, Jello's lyrics racing by in a breathless power-rant and East Bay Ray choosing, rather than deft, precise guitar lines, to just play really noisily. Nothing on it is as captivating or catchy as the songs on Fresh Fruit For Rotting Vegetables or Plastic Surgery Disasters, and for the most part its far less developed or musically satisfying than the later Frankenchrist. It's kind of creatively on par with Bedtime For Democracy - but much, much briefer. The cover is the high point, memorable and eloquent; showing a golden Christ nailed to a folded-dollar cross, it's not necessarily blasphemous, just a critique of the church and the exploitation of Christianity by capitalist interests, but it was startling enough back in 1981, when it came out (my parents certainly didn't much like the T-shirt, which I would later buy, probably at the DK's 1984/1985 York Theatre "Fall Of Canada" gig). I've seen used copies of the album before, and passed it up, but this particular copy I absolutely had to get, because there was a tear on the cover - a white spot where the surface of the album art was ripped away when tape was affixed to it and then removed. This made this copy very very special to me. The reasons why require some explaining:

Fantastic post. Brought back memories of my own punk awakenings. Especially like reference to D & G Collectors.

Don't always comment, but have been following your blog religiously.

Sorry about the bad times. Hope things get better.

Thanks, Reg! Yeah, D&G had some great scores now and then, and must've been pretty convenient to folks in Burnaby like yourself. There's actually a fun "part two" to this story. One of the next big concerts I went to at the Coliseum was the Clash, on the CUT THE CRAP tour - not the REAL Clash, but it meant a lot nonetheless. On the way down, me and a buddy stopped at D&G, where I scored an uncensored first pressing of DOA's TRIUMPH OF THE IGNOROIDS. No way was I leaving THAT - with its flimsy cover - in the coat check, after my last experience! By that point, I'd SEEN the DK's at the York and knew how rowdy punk shows could get, so I insisted to my buddy that we stay in the nosebleed seats we'd bought tickets for. Eventually Joe did his thing of calming the security guards down about stage diving and stuff - which actually backfired towards the end of the night, when a million kids rushed the stage and the band had to perform kind of hunched around their microphones - and he started inviting people to come down from their seats into the floor, where the action was. After awhile, EVERYONE was on the floor, except for a smattering of losers like me an' Doug, and Joe started to ridicule us as "not getting it," staying safely at a distance and consuming it as spectacle. My buddy protested that he wanted to go down there, but I was adamant: "No way am I going down onto the floor with a rare DOA album! This thing's worth money! I don't want it to get wrecked!" He was most unhappy. Truth be known, I felt a little satisfied that Joe ended up with a big crowd on stage, which I don't think is what he'd intended or wanted. "Serves him right for ridiculing me!"

I forgave Joe, and saw him three times after that, tho' - once with the Pogues and twice with the Mescaleros, in Japan. I'm glad to have seen him at all.

By the way, folks, I have two interviews with Reg online, both of which have us talking about our early punk years, here:

And here, which was a sort of postscript to my big Motorhead interview in The Skinny:
http://theskinnymag.info/view_article.php?&article_id=404

To the person named Ronn who tried to comment -

Thanks for the comment, glad you enjoyed the post. I assume the link you provided was for Valerie Solanis' SCUM Manifesto, but I couldn't open the "Womynkynd.org" site it came from, and I'm reluctant to put hyperlinks in my comments section that could lead readers to dangerous sites (I have had spammers post hyperlinks to porn and to potentially infected sites before). I have elected not to publish your comment. Plus I'm not really interested in that document, to tell the truth. Men are problematic creatures, but I don't really feel the need to direct people towards hating them; my self-esteem is low enough without piling on more shit!

And of course I was at that Clash concert, too! Down in front! Never got to see the Mick Jones version