Punishment Park upcoming at the Vancity Theatre, plus more 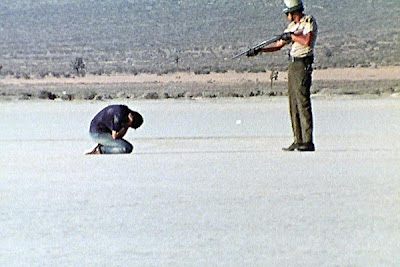 One of the most passionate political films I've seen - and also a startling experiment with film form, a pseudodocumentary that was mistaken in some quarters for an actual depiction of the treatment of radicals by the American government in the early 1970's - Peter Watkins' Punishment Park (see also here) is a fascinating, if painfully grim, look at the polarization of political discourse in the USA, imagining an America where longhairs, dropouts and protestors are rounded up, submitted to a kangaroo-court trial, and given a choice between serving a lengthy jail sentence or being herded into the desert to run the obstacle course of the title, pursued by National Guardsmen and police with little respect for the rules they are paid to enforce. It will play at the Vancity Theatre starting January 8th, in a new 35mm print. Mr. Watkins issued a self-interview to give insight into the making and meaning of the film, which I previously published here, prior to screening the film at Blim on video some years ago. I'm delighted that it's going to play in a proper film version here, and encourage all cinephiles of the city to check it out; bring people to talk with, after the film is over. Punishment Park is essential cinema for dark times; it won't cheer you up, but it might get your blood boiling, and it will definitely hold your attention...

More to see at the Vancity that I'm keen on - including The Yes Men Fix The World and Antichrist, in a double bill with Carl Theodor Dryer's Day Of Wrath. Nick Ray's Bigger Than Life is a great James Mason vehicle soon to screen at the Cinematheque - whose website I'm having issues with tonight, but check the Criterion Collection site for more, since the film will make its first appearance on DVD soon...
Posted by Allan MacInnis at 1:13 AM