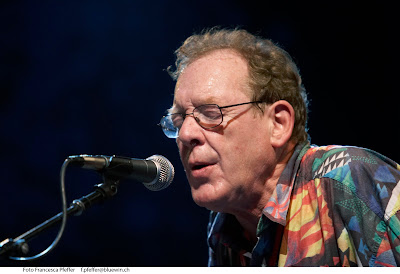 Phil Minton by Francesca Pfeffer, not to be reused without permission

With apologies to Paul Dutton, Koichi Makigami, Maja Ratkje, Jaap Blonk, and Maggie Nicols -vocal improvisers whose music has brought me great pleasure and whom I'm very happy to have met - my favourite vocal improviser is Phil Minton, especially if I get to see him at work live. I am thus utterly thrilled that Vancouver New Music is bringing Phil's Feral Choir (audio and video of which are at that link) back to town - tho' technically, most of the people who will be onstage are already here, as Mr. Minton will be organizing workshops and a performance for locals - musicians and otherwise - who might wish to participate chorally in this unusual art form (Ross Birdwise, are you receiving?). The sign-up date is mid-January and the performance will be January 24th.

I'm pleased to promote it by posting my old Phil Minton interview, from Bixobal #2 - a fine little zine I dearly hope will get back on it's little webbed feet someday; for further reading, there's a fun Phil Minton anecdote in my recent piece about that Paul Dutton/ Alex Varty/ Coate Cook concert at 1067...

The Diminishing Doughnuts of Phil Minton
Interview by Allan MacInnis

One of the most remarkable performances I’ve seen was a small, free “Feral Choir” concert conducted in February of 2007 led by the UK’s Phil Minton at Vancouver’s Carnegie Center – located at Main and Hastings, the “Ground Zero” of Vancouver’s Downtown Eastside slum. Various locals – often exhausted by a combination of poverty, drugs, alcohol, mental illness and misery – would shuffle into the tiny hall, filling up on free coffee and peering, occasionally, in various states of confusion and annoyance, at what was going on at front. Some stayed, and some left after about a minute shaking their heads. Of those, some came back to peer a little more intently a few minutes later, re-filling their coffees en route, as the bespectacled improviser led six Vancouver non-professionals through an ever-shifting series of trills, burbles, bleeps, moans, and chants. Each member of the choir – from a tiny plump white-haired woman adorned with brightly-coloured scarves and an expressive style that suggested Wallace Shawn, to a hugely bearded beanpole in a bandana – performed with his or her own distinct style, producing something organic, beautiful, and utterly bizarre over the course of a single thirty minute improv. The only false note was when one straightish woman attempted to inject a Bob and Doug McKenzie “cu-ru-cu-cu” into the proceedings; in the case of music already so infused with playfulness and joy, there isn’t much need to force humor onto the stage.

Minton would perform again during that trip to Vancouver, at the Ironworks, as part of a rotating ensemble organized by Coastal Jazz and Blues (later edit: the Time Flies festival, which I neglected to name as such in the original article), modelled on Derek Bailey’s “company weeks,” in which varied combinations of gifted improvisers were mixed and matched over the course of several nights. Said company included violinist Eyvind Kang, UK saxophonist John Butcher, Toronto drummer Harris Eisenstadt, Dutch pianist Cor Fuhler, and Danish guitarist Hasse Poulsen (who more often than not played his guitar with a bow or a slinky). Local cellist Peggy Lee and transplanted bassist Torsten Muller rounded out the pool and did Vancouver proud. As gifted as these musicians are, when he took the stage, the seated Minton stole the show, performing at a remarkable level of physical intensity, his entire body called into play; anyone watching his twitches, jerks, leans and lolls in another context might assume that Minton was quite nuts, or perhaps attempting an eccentric form of theatre, but his physical immersion in producing sound really betokens nothing more than his total devotion to his craft.

Thanks to Coastal Jazz’s Ken Pickering (who is an aficionado of the art of vocal improv, and often brings exponents of the form to our jazz fest), I’d seen Minton several times previous, both as part of the Dedication Orchestra and in a small group improv with Muller, Lee, and the delightful Maggie Nicols (who says of Phil, “I adore him and he's easily my favourite male singer.”) I was too intimidated by Minton’s unique and oddly charismatic presence to approach him about an interview until the February concerts, but when we finally got talking, I found him warm and tolerant of my at-times overlong, intensely inquisitive questions. When I stumbled once in my nervousness – calling him “Mr. Dutton,” thinking of Canada’s own master of vocal improv, Paul Dutton – he responded with a bizarrely guttural, but playful, growl that will remain ever untranslatable (which is probably for the best!). What resulted was an interesting, but brief, glimpse into the career of a most unusual performer. Those wanting more are encouraged to visit Minton’s homepage, http://www.philminton.co.uk/.

By the way, we Canadians (- because this was being published in an American magazine, dig? - ) spell it “donut,” too. I have followed Mr. Minton’s lead.

Allan: Is now a good time? 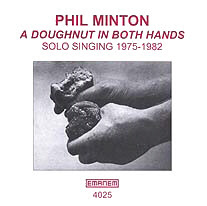 Phil: There will be: No Doughnuts in Hand. It’s a trilogy. I hope it will be released this year sometime.

Allan: Those albums are entirely untreated, right – no electronics?

Allan: Are there other vocal improvisers whose work you particularly like?
Phil: Of course, Maggie Nicols is great, and Jaap and Paul and David Moss, these guys.

Allan: How about performing with other vocal improvisers, versus other instruments? Do you have a preference?

Phil: Nope! Doesn’t matter what the instrument is.

Allan: Americans versus Europeans? You seem to be very European in your approach to improvising - there doesn’t seem to be a lot of the blues in what you’re doing?

Phil: Is the blues like, a flattened third interval? I don’t think I do any of those. But I don’t know if that is the definition of the blues, really... Ah... It’s sort of European, I suppose, but a lot of American improvisers don’t use the blues, either, I would say.

Allan: I’ve read critics say that a lot of Europeans are more interested in sound in a pure way, whereas blues scales are really pervasive in North America...

Phil: Well, last night – we were using stuff in between the notes as well. Stuff that can’t be notated, even – we’re not even on scales!

Allan: How do you feel about people like Maja Ratkje, who treats her voice with electronics?

Allan: She’s from Norway. She’s in Spunk and Fe-mail, and has done some vocal improv work with Jaap Blonk. How do you feel about electronics? Do you try to stay away from that?

Phil: Yeah, I’ll stick with my own stuff. It’s another instrument, it’s another way of thinking, but I’m trying to find sounds from my body... I couldn’t put it in a computer and store it and then try to find it. I wouldn’t know what to do. I wouldn’t be able to do it. I don’t want to do it. I have no interest in it... I find it hard enough to switch on a light!

Allan (laughs). Okay, well – one last question, then. You had said that you wanted to keep things positive, wherever possible, but... do you have any sort of philosophy of art, any particular effect you want to have on your audience?

Phil: I... (pauses; thinks, and states decisively): I want to be loved.

Phil: Just like everybody else, I think. It’s a strange way of going about it....

(Those interested should note that since this interview took place - in late 2007, I think - No Doughnuts In Hand has been released on the Emanem label. More information on that here).

Posted by Allan MacInnis at 4:22 AM

liked this post on minton. i am writing book 2 on yodeling: YODEL IN HIFI. will feature mostly living yodelers and adventurous yodel-using vocalists. i have met minton in amsterdam where i saw him perform twice. was impressed. will probably use a credited quote from this blog if you don't mind.

Please mention that the article originally ran in Bixobal #2, not here - but sure, I don't mind, as long as it's credited!

(By the way, if it's useful, search this blog for Petunia - he's more of a traditional, Jimmie-Rodgers-style yodeller in Vancouver).