Vintage Male Nudes: A Rather Naughty Show and Sale 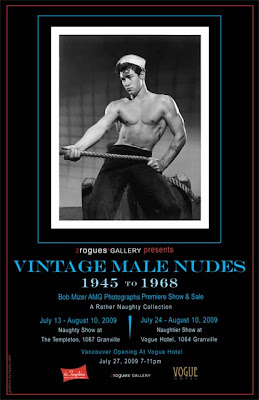 There's a great story around the new exhibition of Vintage Male Nudes that Femke van Delft is co-curating at two locations downtown. (The Templeton restaurant at 1087 Granville has some; the main show is at 1064 Granville, across the street in the lobby of the Vogue Hotel. The official opening for the show is at the Vogue, tomorrow, from 7-11PM.) It's the story of Bob Mizer and the Athletic Model Guild, previously recounted - I gather with various holes - in the book and film Beefcake, and in the book Bob's World: The Life and Boys of AMG's Bob Mizer. It's a story about how sexual desires considered taboo and transgressive in 1940's and 50's America were able to find a way to flourish, with certain restrictions, underground, and a story about the role of porn in the promotion of gay rights. Mizer's pictures - sometimes kitschy, often rather prescriptively classical images of muscular men posing in various states of semi-nudity - wouldn't normally catch my eye (pornwise, I'm more into chubby women - matter o' taste), but the historical background is interesting indeed, and Femke has done her homework; she makes a fascinating guide to the work, and will be on hand at the Vogue tomorrow and throughout the show to answer questions and facilitate purchases (the pieces on display are very reasonably priced, ranging, for the most part, from $89 to $229). What follows is based on my conversation with Femke as she toured me about the Vogue show at a media preview on Thursday.... 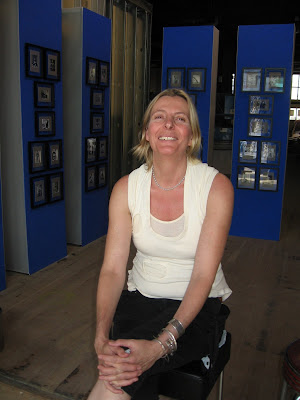 Bob Mizer was an LA-based photographer who specialized in selling homoerotic pictures of men at a time when doing so was quite dangerous and could net you jail time. I gather he moved towards less interesting hardcore work in the 1970's, a period not documented in this show; the conditions of censorship and taboo that obtained during his early career forced an inventiveness and subtlety not as evident in his later work, with his mother helping to design sets, costumes and posing straps. Initially his images appeared in catalogues designed to get work for the unemployed actors and models who posed for him, hence his founding of the Athletic Model Guild, but soon Mizer realized there was more reliable coin to be made simply using his catalogues to promote his photographs, which, he discovered, people were interested in discreetly buying.

Above-ground publications with images of stripped-down (though not fully naked) men existed at that time, but generally they were muscle mags, showcasing concerns with health. "He shot in this classic physique way" associated with these publications, Femke explains, "but his catalogues had none of the articles on strength and health and no advertising for supplements, so his work became about the male gaze." Clandestine arrangements were made to sell his photographs by mail and by delivery; in 1947, Femke tells me, he was arrested for the distribution of obscene material through the mail and served a six month term. The experience appeared to have politicized him more than discouraged him, since in 1951, he would found a magazine, Physique Pictorial, to showcase his work. 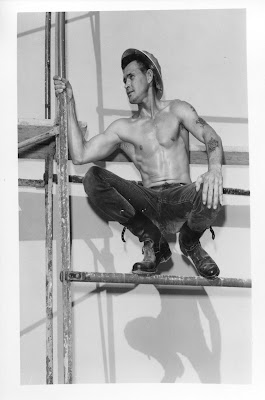 "I wondered how he was able to step it up a notch after having gone to jail," Femke says, "because a magazine - it's really in-your-face." In researching Mizer's past, Femke found a quote about Mizer's friend, sexologist Alfred Kinsey, that may shed some light on his newfound courage. "Mizer said about Kinsey that he was a messiah that had lifted the chains off his shoulders. He was a lifelong friend of Kinsey, and Kinsey interviewed him and all his models. I believe - though it's just a theory - that Kinsey gave Mizer the courage and the moral authority, through the social sciences, to take on a whole system." This would include a Supreme Court case in 1960, in which Mizer pioneered the "art alibi" in the defense of his publication and work.
Mizer's assertion of gay identity was still guarded in his magazine - editorials were political, but focusing on more general questions of civil liberties and equal rights. "He wrote editorials on capital punishment and the civil rights movement," Femke tells me, but any open defense of queer culture was "more couched." "Mizer was very aware of how homophobic America was. He was sensitive to his audience's fears. I mean - people were jailed. And if they weren't jailed, they were told they were mentally ill." Femke nonetheless sees Physique Pictorial - original copies of which will also be on hand at the Vogue - as "opening the door for gay rights," by its photographic contents and its existence. "When he discussed sex in Physique Pictorial, he talked about it in very broad terms, but nonetheless - it opened the door. And at its peak circulation, there were 100,000 people who were reading it," she says. "That's 100,000 men who no longer feel isolated." 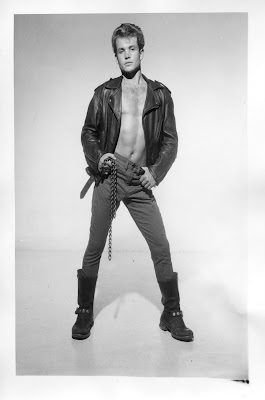 Pictures in the collection range from Spartan wrestling themes - because it was okay to have men touching each other if they were fighting - to shower images, to cowboy themes, to mini-narratives that take place over more than one picture; the most amusing mini-narrative for me has a sailor discovering a nude man reading a magazine, and staring at him perhaps in disapproval - this from a period in the 1960's when Mizer was employing full frontal nudity - and then, in the next picture, being assisted out of his sailor's suit by said nude guy (nude guy wins!). There are even - somewhat startlingly - a couple of African-American men in photographs (the only AMG models who used their real names, Femke notes, though she is not sure what to make of this); one picture on display actually has a black man and a white man together. Images are all black and white and attractively framed, with cobalt blue walls behind them. It's an interesting show, but for collectors, its also a chance to own a historical artefact - a piece of the history of gay rights and freedom of expression.
Vintage Male Nudes shows until August 10th.
Posted by Allan MacInnis at 5:27 PM