Summer of Sound: My Generation and Apparition Of The Eternal Church at the VIFC Barbara Kopple and Thomas Haneke's My Generation: still muddy after all these years

Vancity Theatre programmer Tom Charity and I got to talk briefly about the ongoing VIFC Summer Of Sound festival for The Georgia Straight this week. It was a fun Music Note to write, because Charity made the "Summer Of Love Redux" angle quite palatable - somewhat to my surprise, given my previous gripes about how Boomer-centric the program seemed. Seeing the festival as a chance to reappraise what Woodstock - celebrating its 40th anniversary - meant and/or still means in light of subsequent developments in popular music - including the corporatisation of rock and commodification of youth culture - is a considered and interesting angle, and I'm particularly eager to see My Generation, to see what leftist documentarian Barbara Kopple (who co-shot the film with Thomas Haneke) makes of the two 1990's revivals of Woodstock. Acts filmed include Green Day, Metallica, Nine Inch Nails, the Rollins Band, The Red Hot Chilli Peppers, Sheryl Crow, Blues Traveler, and Primus, tho' I'm not sure how much footage there is of performances in the film. Less, I'm told, than the performance-heavy Woodstock, also screening. More on My Generation can be read here - or see Barbara Kopple's website. It sounds like a rather cynical appraisal of the corporatisation of rock, which may be partially why the film remains unavailable on DVD... 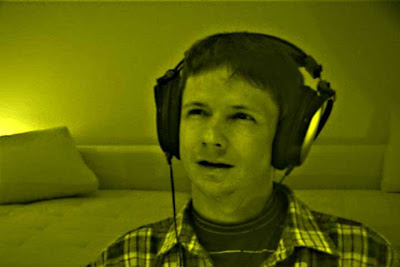 The film Charity is most excited about, meanwhile, is the Canadian premiere of Apparition of the Eternal Church. "I think it’s a really unusual film," he tells me, "because it’s a film that takes head on the challenge of how we respond to music, and makes that not just its subject, but that’s reflected in its form, which is innovative. This is a documentary about Messiaen ten-minute organ piece of the same name, and for the first half of the film - the first three quarters of the film, even - we don’t hear the music," Charity explains. "We just watch people listening to the music wearing headphones as they describe what the music means to them. And some of them are music experts and musicians, but many of them have never heard this piece, and don’t know anything about it - so it’s a very pure response. And Paul Festa, the director, cuts between their thoughts as they listen. It’s remarkable how this abstract art conjures such strong, passionate feelings - by no means all positive - and in many cases very similar pictures come up in people’s minds," with analogies funereal, sexual, Christian, and apocalyptic being drawn on by the 31 "subjects" of the film, who are often surprisingly funny, as well as perceptive and articulate (John Cameron Mitchell and Harold Bloom are among them, as is some potsmoking guy in bizarre Gothy monster/fetish makeup who goes by the name Squeaky Blonde). I actually liked this first (and longest) segment of the film - simply showing people listening to the music and describing their reactions - quite a bit more than the last section, where Messiaen's piece plays with considerable textual accompaniment (from Nietzsche, Saramago, and Blake), so that the film suddenly stops feeling like an account of the subjective experience of listening and instead a sort of essay on the composition itself. I'd rather have continued hearing people's reactions and then spent ten minutes with a black screen, listening to the piece myself, without being further guided in my interpretations of it. That aside, I quite liked the film, and recommend that anyone interested in how people listen to music attend the screening; it's an unusually compelling experience, watching and hearing people's reactions to this piece of music; it works far better as cinema than I'd anticipated.
Apparition Of The Eternal Church will screen with 32 Short Films About Glenn Gould, which Charity decribes as "one of my favourite music films, and which again, I think, finds innovative ways to describe the process of making music and hearing music and how that should be put on film. " This one I haven't seen; it interests me that Don McKellar co-wrote it, alongside director (and McKellar's Red Violin collaborator) François Girard, so I may seize the opportunity to check it out.
Interesting as all these films sound, my prediction is that the most popular double-bill of the Summer Of Sound series will be the August 9th afternoon pairing of Leonard Cohen: I'm Your Man with the Townes Van Zandt documentary, Be Here To Love Me. But I could be wrong...
Oh: an interesting detail that I couldn't get into the Straight piece: the Vancity Theatre has been granted a liquor license, with the bizarre Catch-22 caveat that patrons are not allowed to bring alcohol with them into the theatre. To reduce the conflict of interest between the desire to drink beer or wine, and the desire to not miss any of the film, the Vancity will be projecting the films off DVD in the lobby as well as in the theatre off film, so you can go out for a drink without missing a beat.

Or a chord.
Posted by Allan MacInnis at 7:48 PM