Final show at Richards on Richards 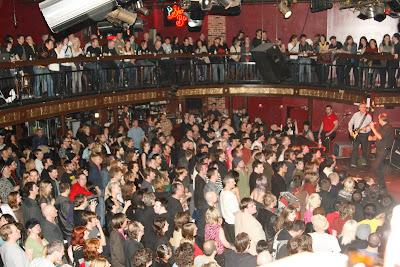 Can you find yourself in the crowd? The Pointed Sticks Vancouver reunion at Richards on Richards, 2005 I think (evening show). Photo by Cindy Metherel.


Sunday, July 19th, marks the closing of Richards on Richards. The venue has been open in one form or another since the late 1970's, when it was known as The Laundromat - an important space for Vancouver punk. Since I relocated to Vancouver in 2002, I've seen many great gigs there (Art Bergmann, Nomeansno, Daniel Johnson, Rocket From The Tombs, Black Mountain, The Furies/DOA double-bill, and two Pointed Sticks reunion shows stand out as highlights). I watched Blixa Bargeld ironically snipe at what he took to be the country-bar atmosphere, and I apologized personally to Carla Bozulich for how noisy the audience was when she opened for Thee Silver Mount Zion a few years back. The layout of the venue has always made it difficult for me to enjoy quieter or subtler music there, because of the proximity of one of the bars to the stage and the tendency of people in the balcony to relax and chat, which sound often carries down to the audience below, but its not like a lot of quiet, subtle music gets booked there; and sometimes - as when Nels Cline played there with Wilco bandmate Glenn Kotche - people actually do shut up and listen. It really would be fitting if the place were allowed to close with a punk act, given its history, but the long-rumoured decision to close and bulldoze the place came suddenly, requiring, we gather, several acts to reschedule at other venues. It's no surprise, I guess, given the amount of construction going on in the city and the general state of cultural turmoil here that the axe would finally fall... 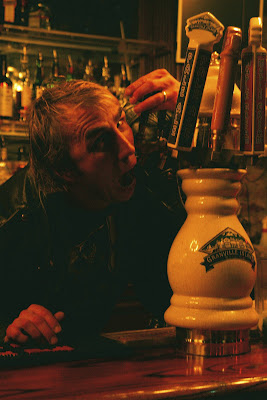 Joe Keithley grabs a quick drink at Richards on Richards, photo by Cindy Metherel. Not to be used without permission.

DOA frontman Joey Shithead Keithley had mentioned Richards on Richards when I interviewed him for Razorcake a couple of years ago. I'd asked him about the authorities' attitude towards punks back in the day; he said that in the late 70's and early '80s, firebombings and other forms of civil unrest in the city had been going on, and then, "mysteriously, you couldn’t play anywhere. All the clubs we used to play at like the Windmill and the Buddha and a few other ones around town, all of a sudden said, no no no, can’t book you, can’t book you. So then we started doing shows at little halls out the ‘burbs. It was never completely confirmed, but the police suspected this as being the anarchist gathering place, right, and it got to the point where – I guess this is early 1980, late ‘80, or something like that, when what’s now (Vancouver club) Richard’s on Richards was called the Laundromat; for about eight, nine months or somethin’ like that, I know a bunch of people who claim for sure that the police rented a place across the street, like, the CLEU guys, and videotaped everybody goin’ in or out, so they could get a profile of everyone who would go to this kind of anarchistic punk rock gathering." (The police really should be a sport and release some of that footage for old Vancouver punks to pore over: there I am! There I am!).

The final show there, next Sunday, will not be punk but funk, however: 12-piece Afro-Funk ensemble Five Alarm Funk will do the honours of closing the venue, prior to the slated demolition on the 21st. An "official closing party" is also slated for tonight, with The Manvils and others, and then there's the Sin City Glitz & Glam 8 Year Anniversary Fetish Sextravaganza on Saturday, but for me, Five Alarm Funk are going to be the real party. The band includes both Tom and Neil Towers, whose last name bears a non-coincidental resemblance to another figure on the Vancouver music scene, the more mysterious Chris Towers, their older brother. "It's been a great venue - it's a privilige to be closing it down , tearin' it down with hot fire," Tom Towers, the conga player tells me. The band will be promoting Voodoo Hairdoo, their most recent CD, tracks of which can be heard here; everyone I've asked tells me these guys kick ass. Those too late to get tickets are encouraged to buy the CD and go listen to it in the wreckage of Richards as an alternate way of paying their respects. 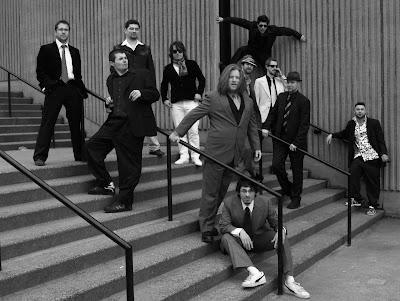 I think I may just turn out to see the Towers open fire and to say goodbye to a venue that I've never wholly loved, but always kinda liked; certainly I'll be aware of its absence. We gather that Richard's liquor license will be translated to the A&B Sound hull on Seymour, but Richard's on Seymour just doesn't have the same punch to it... 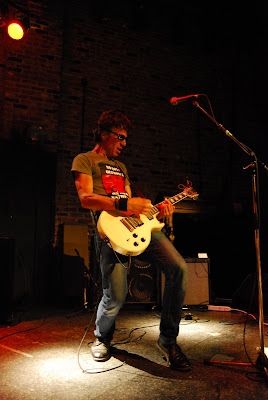 The Furies at Richards on Richards by Femke Van Delft. Not to be used without permission.
Posted by Allan MacInnis at 12:03 AM