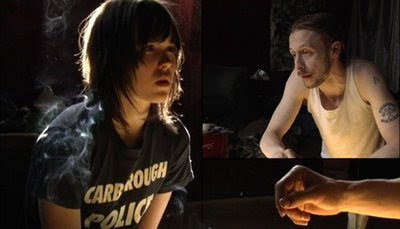 Liked this film, Bruce McDonald's new one, based on local writer/ UBC prof Maureen Medved's novel. Formally adventurous, in the best way; unlike van Sant's unnecessarily tricked-up Paranoid Park, it uses it's various "gimmicks" - a shifting kaleidoscope of multiple screens, fragmented images, layered soundtrack, and non-sequential time signature - to richly illustrate the inner life of its unhappy 15-year old female narrator, Tracey Berkowitz (van Sant's film, by contrast, seems to be disguising an absence of any real feeling with its overly aestheticized approach; it doesn't know how to depict its character's inner life, so it tries to dazzle us with images of his outer life, to an ultimately deadening effect). Not quite a feature's length worth of story here, and various "bits" in the film (the psychiatrist - a cross-dressing Bucky Haight - and Lance from Toronto, shown above) don't amount to as much as they could, but the moments that work work beautifully, the film is ALWAYS compelling to watch, and the world needs more emotionally honest movies for fucked up, suffering adolescents, since they generally are left to fend for themselves and can use the reassurance that they aren't alone. Plays again tomorrow at the Cinematheque. I haven't seen a Bruce McDonald movie since Hard Core Logo, which I love; it's nice to see that he's continuing in a sort of punk spirit (even sharing the rights to his work, with Creative Commons licensing). Yay team.
Posted by Allan MacInnis at 9:09 PM

Email ThisBlogThis!Share to TwitterShare to FacebookShare to Pinterest
Labels: movies