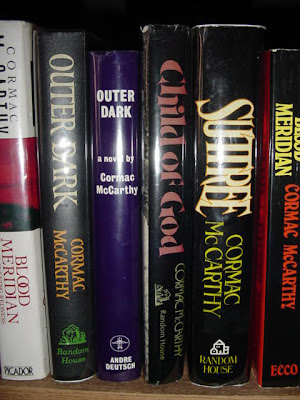 Photo: the good old days, when I still had my Cormac McCarthy collection (all now sold; the above was taken when I listed them on eBay).

Holy shit, is this funny. A 9th grade teacher is possibly facing charges for giving one of his "Advanced Placement" English students Cormac McCarthy's Child of God to read.
Child of God, my favourite of McCarthy's novels and an excellent starting point for entering his work, is about a displaced, somewhat slow hillbilly, pushed off his land and neglected by the community, who gradually goes quasi-feral, living in a cave and, at first, gratifying his sexual urges by sneaking around lover's lanes, masturbating as he peers in car windows. When he encounters a couple who have accidentally asphyxiated in their vehicle while making out, he has a chance to actually have sex with a female, if dead; after he comes, he leaves, and then thinks again and decides she still might be useful, carrying her body with him back to his hiding place. Having developed a fondness for sex, even if it's with dead people -- certainly the only kind of sex he can get, given his poverty, dim wit, unkempt appearance, and reputation as a misfit (all of which leave their mark on his self-esteem and opinion of "society") -- he progresses to actually killing women so as to become intimate with their corpses, storing up their bodies in his cave. The marvellous thing about the book is that this character - Lester Ballard - is McCarthy's protagonist, and he is consistently rendered as recognizable and human, whether we like it or not - "a child of God, much like yourself," I believe McCarthy describes him as. It's actually a very funny book, in very unsettling ways, and an essential piece of American literature.
The idea of giving it to a 9th grader, though - what was this guy THINKING? Either this is an extremely naive human being, unaware just how STOOOOOOOOOOPID the vast mainstream of Americans are - how illiterate, and how blissfully ignorant of the interests and appetites of their youth -- or else he has a whole lot more faith than I do in the justice of the universe, the security of his position, and the wisdom of his employers. I would have LOVED this book in Grade 9, myself - I think that was the year I read Richard Matheson's Hell House four times consecutively - so it's not like the kid can't take it; if he's a normal teenaged boy, he's probably sought out far more perverse, salacious, and unwholesome materials to sate his curiosity about life, doubtlessly with far less literary merit than the McCarthy novel. From where I sit, tho', the teacher, Kaleb Tierce, probably needs a harsh reality check; if nothing else, it'll sharpen his survival instincts, which appear to be somewhat deficient.
I wonder if Cormac McCarthy has heard about this case?

Heh: I wonder if Oprah knows?
Heh heh heh heh heh. This little tidbit made my night.
Posted by Allan MacInnis at 12:20 AM

it gets stranger - apparently the book was on an "approved reading list," compiled by other 9th grade teachers. ONE teacher being naive/brave/idealistic enough to hand this to a student is one thing; a group of them - well, I just don't understand. More discussion here:

Weirder still: he's 25, and he's now being investigated for having "inappropriate relations" with his students. The student who was assigned the book was, further, a girl. I smell something wrong here - this guy must have some serious problems:

Heck, if'in that teacher REALLY wanted to get into trouble that could've been done by givin' the youngin' moi's wee, hipbilly, YouTube film/research
"AMEN (hotep IV, that is)."


A most interestingly cool blog you have.