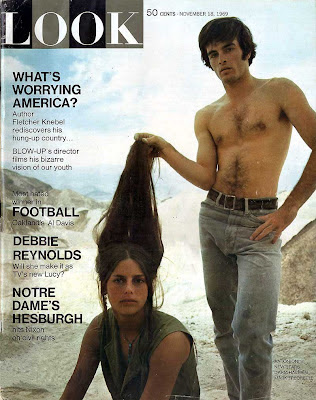 The above image was shamelessly lifted from Dave Kehr's movie blog; if anyone objects, do let me know! (The whole article from Look is here - thanks to Ellipsis 7 from the Criterion Forum).

One of my favourite films, for years, has been Michelangelo Antonioni's Zabriskie Point (I even worked a reference to it into my Meat Puppets review in this month's Nerve). It's a great trip film, has some amazing images, and, for me at least, it's fascinating to see the older Italian director - who had looked so skeptically at the UK pop scene in Blow Up - seeming to grow genuinely, sincerely sentimental about American youth culture of the 1960's. Some find its antiAmericanism a trifle cliched and hard to take - it's probably a good thing that Antonioni omitted an image of a plane pulling a "fuck you, America" banner from his final cut - if indeed such a thing ever existed - but I'm too overwhelmed by the film's beauty to mind.

By the way, Daria Halprin, pictured above, currently is some sort of yoga instructor in California - click the link to see a current picture. I emailed her awhile back with an interview request, but she never got in touch. She's one of the few people left who one could talk to about the film; Anotonioni, of course, is dead, as of this summer. Mark Frechette, the young man pictured with her, died in prison a few years after the film was made, after experimenting with bank robbery as an expression of his fervor for revolution; he'd been a member of Mel Lyman's cult prior to the making of the film, and abandoned acting afterwards (both the previous links lead to really interesting articles, posted by the same people - highly recommended). John Fahey, who was supposed to score the famous "desert lovemaking" centerpiece, died in 2002, and, it's said, got booted from the project when he got into a fistfight with the director over his views on America. He was replaced with Jerry Garcia - now also dead, of course. I don't think I'd care much about talking with Pink Floyd about this film, though I do love their musical contributions. Daria, where are you?

Showtimes for Zabriskie Point are here (nevermind the uncharacteristic spelling error in the title). It's not on DVD (yet), so I'd highly recommend making it to the Vancity on Friday or Monday to see it.

LATE ADDITION: I've edited the post to add reference to the complete article in Look.

Posted by Allan MacInnis at 1:33 AM