The Nanjing Massacre, the Japanese, and my Dad 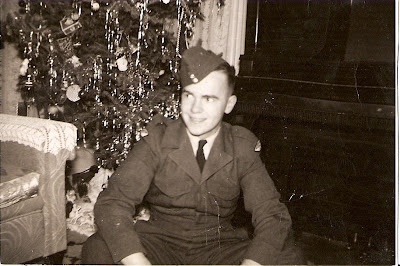 Taken during my father's first year in the airforce, Christmas 1953; photographer unknown

I lived and worked in Japan from 1999 to 2002, during which time I had conversations with many Japanese bearing on the Second World War. The variety of opinions one encounters about incidents like the Nanking Massacre - the title of the important new documentary playing at the VIFF aside, it really should be given as the Nanjing Massacre, to reflect current practice - is considerable; there is no one "Japanese point of view" about the events in China of 1937, when a rapacious and ruthless invading force slaughtered as many as 300,000 Chinese non-combatants and raped countless women, any more than there is a single point of view in North America about the Allied firebombing of Dresden or the internment of Japanese-Canadian civilians... though in the case of many young Japanese, if you ask them about Nanjing, you're likely to get a blank stare and a "Huh?" (Or, in Japanese, an "ehh?").
Ignorance does not always equate with innocence, though, and part of young people's ignorance may be due to Japanese government policy of "toning down" textbooks that mention wartime atrocities (typical story here). Certain political elements in Japan prefer to present the Japanese as the victims of aggression in WWII, rather than the perpetrators, and would rather commemorate Hiroshima than Unit 731. The more extreme manifestations of this desire to cover up past crimes can be quite shocking; if you poke around Yahoo Japan, for instance, you'll find a plethora of sites like this one, advertising a "Nanjing debunking" video - or this one, which claims the various photos of atrocities that have entered the public record (see below) are faked. I remember reading a plaque at the Hiroshima Peace Museum that made brief mention of "alleged atrocities," or such; I can't quote it exactly, but it seemed an attempt to satisfy both camps - acknowledging that it is said as many as 300,000 died, while also noting that this number has been disputed. We need only imagine how well the word "alleged" would go over in regard the Jewish Holocaust - or any other widely-known, historically unquestionable atrocity - to get a glimpse of how unlikely it is such fudged gestures will placate the Chinese. 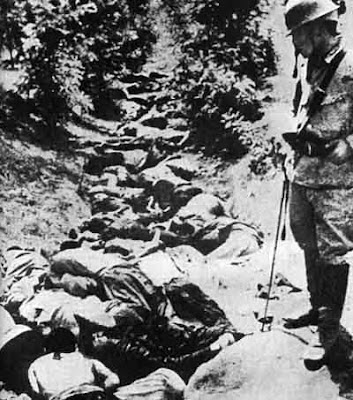 As it happens, I met and got to know a Japanese history teacher of "massacre denial" stripe, as I have elsewhere recounted; he said in no uncertain terms that he thought Iris Chang, then living, was a propagandist trying to disgrace Japan and get reparations for the Chinese, and he repeated one of the dumber bits of propaganda that the Japanese right have spread, that there were far fewer people living in Nanjing than it was claimed were killed (Hello? It was the CAPITAL OF CHINA, for chrissake. China is not known for its scarcity of people). There's another grotesque story I heard a couple of times from Japanese, about how one of the prison guards executed after the Tokyo War Crimes Tribunal for having fed wood to POWs, as a sort of cruel prank, had in fact been feeding his prisoners gobo, a fibrous root that many Japanese eat, sharing it with them out of compassion. He was punished for his compassion - how unjust! It takes a fair level of deliberately maintained ignorance - even in Japan - to let anecdotes like that wash away any hint of wrongdoing.

There are, however, many people in Japan who know better. There's Japanese author Katsuichi Honda, for one - interviewed by David Suzuki and Keibo Oiwa for The Japan We Never Knew, and author of a Japanese history of the atrocities at Nanjing; for his role in bringing what Japan did into the public eye, he has received plentiful death threats (it's rather a shame that the VIFF film doesn't talk about him, but it's really focused on the events of the day). A different Japanese teacher, working at the same high school, initiated a conversation with me about Japanese military aggression and the beheading of prisoners at a Saitama Peace Museum show we went to, saying that he believed that said history teacher - the denier - was entitled to his view, wrong as it was, but that he shouldn't be allowed to teach it to children. (I believe I continued the conversation by talking about Jim Keegstra). Others take a more jaundiced view - "it was a war; these sorts of things happen in war," a view which episodes like Abu Ghraib or My Lai lends some credence to, while in no way excusing those Japanese who deny such things ever took place. Yet others, born long after the war finished, feel these were horrible crimes, but are tired of being held accountable for them, and think it perverse and politically suspect that the Chinese bring these events up again and again (for instance, when Japanese Prime Ministers take trips to worship at Yasukuni Jinja. No reason to be pissed off at that, right?). Most of the Japanese I met who had strong feelings against Japanese Imperial aggression were older, and felt great unease at the steady rehabilitation of the Hino Maru and "Kimi Ga Yo," seeing Japan swinging steadily back to the right, arm in arm with America (so much so that, despite a Peace Constitution that forbids them such things, Japan now has an unofficial army, which is participating in Iraq in what many people feel started as a war of aggression -- by, ironically, the very country that earlier forbid Japan to rearm).

My father has some fairly strong feelings about the Japanese, relating back to two men in their 20's, "Whitey and Edward Kennedy, his brother" who lived a few miles down the street, in the town of Inverness, Nova Scotia, where my father grew up. "As five, six, and seven year old kids, we played kick the can, lacrosse, football, whatever," my father - who would prefer to remain anonymous - recounts. "Edward was quiet and reserved, but Whitey was super friendly. It was during the war, and he had joined up - I believe almost ten percent of Canada had joined up, long before the States. We're talking about 1939, 1940. I would have been six. He'd come out and play with us, and he'd give us candies. He was a little bit on the chubby side, with whitish-blonde hair - that's why we called him Whitey. He'd come out and catch the ball and - he was just a nice guy. I don't know if he was in the North Novies - the North Nova Scotia regiment - but he wore a kilt." 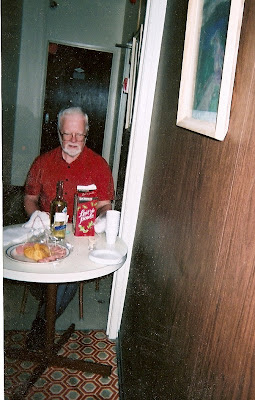 This is a story I've heard often. My father, now 73, has carried these memories for a long time. "MacKenzie King believed Churchill or somebody, that there was no chance of war between Japan and Hong Kong, so he sent them over there. They'd just be garrison troops." In 1941, though - long after they'd conquered China, the Japanese came into Hong Kong, and Whitey and Edward were taken prisoner, an experience which destroyed them. "Maybe three years after the war, they came home. Edward, I don't remember ever seeing him again. He became more reclusive. And Whitey was nothing but a drunk. I never saw him draw a sober breath - he was just shattered by it. And he'd cry and cry and cry. You could ask him anything and he'd cry, and he never played games with us again. Years later, I found out the things they did - at St. Stephens College and things like that. Seventy percent of my life, I've hated and hated and hated the Japanese, because of what they did to Whitey Kennedy."

Ironically, it was my father's strong feelings about Japan - which we'd discuss over The Bridge on the River Kwai or Merry Christmas, Mr. Lawrence - that got me interested in the country in the first place, and led to my going there. I was able to tone down my father's hatred a little with more positive stories of my time in Japan - and bizarrely, when said massacre-denying history teacher came to visit us with his son, we all ended up at a table at Shabusen in Vancouver - my father, mother, the teacher, his son, and myself - eating Japanese food and drinking beer. "The teacher didn't lessen my, at this point, dislike for the Japanese," my father explains, "but his son did. I enjoyed being with a young person who wasn't in any way responsible; he knew nothing about it, and he's not subject to denial, like some other Japanese are... If you remember, I bought them two bottles - I bought the teacher a bottle, and his son, and he said, 'Well, he's only 16' - but his son's bottle, when he opened it, was maple syrup. Later on, we were in their hotel room, and his son liked my jacket, and I was so happy to even know the guy and feel better about some Japanese person that I gave him my jacket - the only blazer I had, with a BC crest on it. I gave it to him! Hopefully he still wears it." 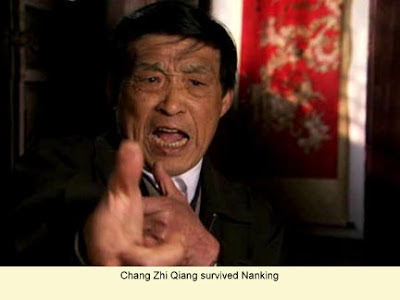 There are still survivors of the Nanjing Massacre, both Chinese and Japanese, and their testimony makes my father's story pale (I include it here simply because it's a personal connection to what would otherwise seem distant history to me). Various survivors are interviewed for the film. Chang Zhi Qiang, for instance, gives a heartrending account of seeing his mother and kid brother bayonetted, but not immediately killed, by a Japanese soldier - after which, to sooth the baby, his bleeding mother held the infant to her wounded breast and let him suckle. Chang is crying as he tells the story - he was nine years old at the time, and it's marked him for life. It's probably the single most difficult part of the film to sit through, though much of what we hear recounted is upsetting indeed: rapes, mass executions, people set on fire... It's strong material, though presented with the utmost taste and restraint. Most of it is read by actors - most notably, Jurgen Prochnow, reading the letters and diaries of John Rabe, "the Good German of Nanking" -- a Nazi who, with other foreigners, set up a refugee zone and protected thousands of Chinese from certain death; and Mariel Hemingway, reading from the works of Minnie Vautrin, an American missionary who protected women. One can only hope that the film finds a Japanese audience, since there are many Japanese who would profit indeed from seeing it; it's quite chilling that one of the Japanese soldiers shown talking in archival footage about what they did appears to be chuckling to think of it.

My father, watching the film with me, growled: "the bastard." 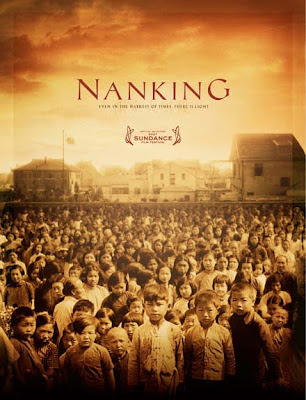 Note: the official site for the film is here.