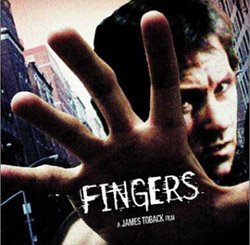 James Toback always seemed like an odd fellow to me. An early film based on a screenplay of his, The Gambler (1974), is as dark and Dostoevskian a film portrait of a self-destructive, hubristic gambler (James Caan) as one can find; it actually is a bit creepy when you discover that Toback is a gambler himself, since the film doesn't leave one particularly comfortable with its title character. Exposed (1983), starring Nastassja Kinski, Rudolf Nureyev and Harvey Keitel, is a quirky film that locates itself at the nexus of fashion and terror, which is a streetcorner filmmakers seldom visit; I remember thinking that the film was subtle and intelligent enough, when I first watched it, that many people would fail to perceive its true theme -- but now I forget what I thought that was; I recall that Keitel's performance is interesting enough to make the film worth seeing, tho'. I've only seen one other of Toback's films, his first as writer/director, Fingers (1978), a bizarre, troubling, and fiercely, strangely intelligent character study of a concert pianist who is also a gang enforcer -- another unusual nexus to locate a film at -- that stars Harvey Keitel; I like that film a lot, but since I've seen nothing else by Toback, my ability to comment knowledgeably about him ends there, save to say that there's a reason I've seen none of his later output. Since I associate him with the gritty, challenging, character-driven cinema that occupied a certain corner of American moviemaking in the 1970s, I don't know what to make of, an am a bit put off by, the fact that he made a movie with Robert Downey Jr. and Molly Ringwald (The Pick Up Artist, 1987), wrote the screenplay for Bugsy (1991) and has gone on to make movies about race and hip hop (Black and White, 1999). His recent venture with Neve Campbell, When Will I be Loved (2004), got good reviews from some quarters, and he seems to have retained a certain degree of independence, but I've found the recent careers of many American filmmakers active in the '70s to be somewhat depressing -- compare David Holzman's Diary with The Big Easy (Jim McBride) or -- well, actually, I won't even watch any of the later output of Jerry Schatzberg, but I have a strong feeling it doesn't measure up to Scarecrow or The Panic in Needle Park. I want to retain my sense of Toback as an outsider, an obsessive, an eccentric making curious little films on the fringes, in a quietly uncompromising and oddly confident way; I don't want exposure to his later films to threaten that image, because it's important to me to believe that people like Toback are out there on the margins, doing what they do (even if they really aren't, anymore).

And the thing is: I didn't think anyone cared but me, so there was no pressure to explore his later films. Who would I discuss them with? Who do I know that cares? ...Well, apparently the world is catchin' up with me, or else I'm nowhere near as far ahead of it as I think, because a documentary has just been made about Toback, The Outsider, and there's a French remake of Fingers that sounds like a must-see, The Beat that My Heart Skipped. (Note: those two links were to official film sites, not just to the IMDB listings). And both these films, along with a projection of the DVD of Fingers, will be coming to the Vancity Theatre in April! There'll be a special event on the 15th where both Fingers and The Beat that My Heart Skipped screen, with a critical introduction to the films, so that sounds like the night to catch them. Mark Peranson of the Vancity is continuing to surprise and intrigue me with his programming choices -- I hope their attendance is improving! (New programs are out now, btw).