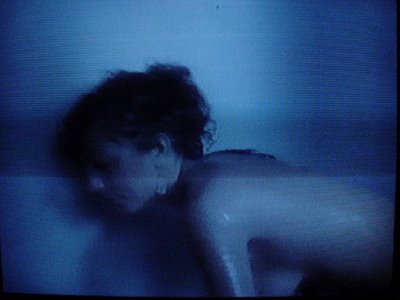 Hrrrmmmm.... Here's some weirdness for obsessive cinephiles out there. As some of you may know, I attended a recent screening of John Cassavetes' Love Streams with a stopwatch and am in touch with Tom Charity, the directors of the Vancity Theatre, and the guy with the bowtie himself, Ray Carney, about the issue of whether or not the new print is complete; I'm also trying to note differences between it, the old VHS, and the new French DVD. Professor Carney -- whom I once actually suggested was WRONG about the material missing from the VHS release, clarifies that the cuts occur during the first dream sequence; strips of black leader -- which either were designed to give a jumpy, dreamlike quality to the scene, or perhaps "slugs," filling spaces where material was to be added, which were kept because Cassavetes liked the effect -- were edited out by the Golan/Globus guys for the video release, perhaps because they thought they were left in erroneously; there's also a jump cut that happens around the same time that is removed, giving a more seamless feel to the scene, which is restored in the new print. Tom Charity, who owns the DVD, confirms that the DVD leaves the black strips in; the new print has them; and I can confirm that the VHS is missing them -- so Ray is RIGHT. So far, so good: but now it gets much stranger. The VHS version INCLUDES MATERIAL THAT IS MISSING FROM THE NEW PRINT!!!!!!! You heard it here first, folks (probably): and all of this revolves around BREASTS.

Those who know Cassavetes' cinema in depth know he was sheepish around nudity; that he is said to have disapproved of the nude scenes in Scorsese's Mean Streets, and only has any substantial nudity in one film of his, The Killing of a Chinese Bookie, which, being set in a strip club, sorta required a bit of flesh (tho' even there, so little skin is actually on display that at one point Ben Gazzara, playing the club owner, Cosmo Vitelli, improvises the complaint, "what the hell kinda strip joint is this, nobody takes their clothes off!'"). It is said that in one sequence in Love Streams, where Cassavetes, as Robert Harmon, is in bed with two of the young girls he gathers around him, he had initially scripted nudity into the scene, but when the girls said they felt a little uncomfortable about it, provided them with nighties. It is somewhat noticeable, then, when, early in the film, Robert Harmon comes upstairs and discovers two of these girls frolicking nude in his shower. In the VHS edition, tho' the sequence only lasts a few seconds, you see the breasts of BOTH girls, quite clearly.

The new print, while otherwise excellent, and including the missing black leader, LACKS said breasts. The girls, I believe, are the same, but the shot is framed such that you can see neither of their breasts, not at all. And now we have several possible theories that come to mind:

1. There are alternate cuts of Love Streams, as with so many of Cassavetes' films, and some have more breast in them than others. This may be a matter of Cassavetes' restless nature, or it could be that Golan and Globus pressured him to include the fleshier take, though it seems pretty unlikely that he would give way to such a cheap demand. It is also quite possible the film was changed without his knowledge or approval -- there are many instances of studios meddling with Cassavetes' films; for instance, apparently all recent releases of Husbands are missing about 12 minutes of material, including (I am told, tho' I only recall one) two songs sung by John "Red" Kullers and several minutes of toilet sounds during the infamous puking scenes. (There have been debates about the quality of the UCLA print of the film, but there are, according to Ray Carney, two versions of the film that were prepared by UCLA -- see his note, above. By the way, if anyone cares, there is a petition to have Husbands released on DVD here). In any event... Under this thesis, the Sony people either happened on a breastless version, or sought one out, believing it truer to Cassavetes' intentions.

2.The Bagel Boys, as Cassavetes called Golan and Globus, decided when they were snipping out the black leader that they should also change the shower sequence so there was more skin, true to their exploitation background, and substituted an alternate take of this scene; in fact (under this thesis), only the VHS version has the breasts in it; they aren't supposed to be there, and the new print is based on the correct theatrical version of the film, somehow restored posthumously to Cassavetes intentions, as with Touch of Evil. This seems quite unlikely, but I mention it to be complete... Though I've seen Love Streams on the screen previously, it was around 1990, and can't decisively confirm that there were breasts visible, tho' it seemed to me there were...

3. The breasts were always meant to be there, were part of Cassavetes' final cut, and have been edited out by Sony for reasons as yet unknown, having to do with MPAA ratings, TV broadcasting considerations, legal issues, or irrational prudery, perhaps centering around a fear of showing what could be seen as representation of lesbianism... This seems the most likely thesis.

I do not know. I will be at the theatre tomorrow, with my stopwatch again (to check a couple of other minor points) and will attempt to get a decisive record of the absent breasts in the new print. And then... well, I dunno what I'll do then. Ask Tom to check the DVD. Email Ray. Email Sony. Post links on IMDB and various other places to this article and plead strangers to solve the mystery... It isn't like I'm discovering a lost version of a Cassavetes' film, but... Gee, this is all kinda exciting.

Much yelling -- a drunken party -- is occuring across the alley outside my window. Can't people sense that important work is being done here?

Having seen the film again, I can confirm that the image source is the same, but zoomed in on/cropped and shortened. You see only the head and upper shoulder of the girl pictured above; they are much larger on the screen; you do not see her breasts, and you do not see the girl on the left in the image below-- who, in the VHS edition, you actually see rise from a seated to a standing position, glimpsing her breasts on the way. (The VHS scene is at least 3 seconds longer, maybe more -- I'm afraid I couldn't see the stopwatch well enough to get a sense of the exact time of any specific scene in the projected film). In the new print, you also don't see the back wall of the bathtub, the bottles, etc. I am not even sure if a viewer of the new print would realize that there are two girls in the tub; a friend present said it went by in a "flicker" and he really didn't see what was going on. Very curious. 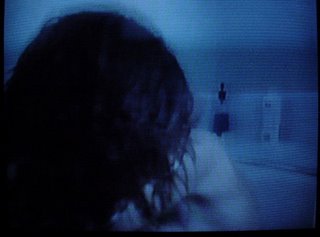