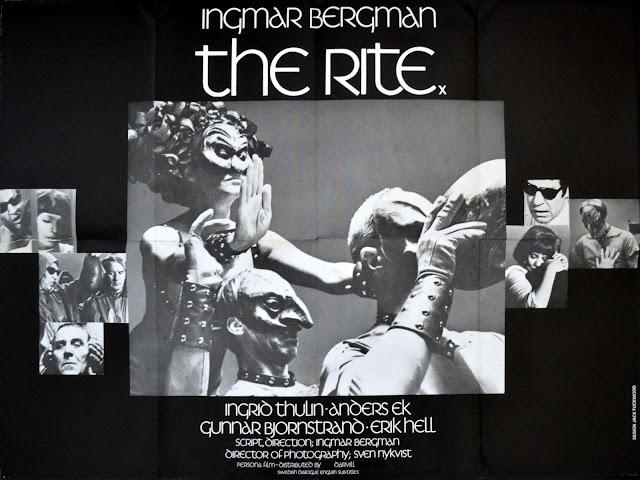 There's a real marathon of Ingmar Bergman films this Sunday at the Cinematheque. They're all highly atypical, daring, potent, and under-rated films, which might appeal to people who think they don't like Ingmar Bergman films: The Rite, Hour of the Wolf, and The Shame. 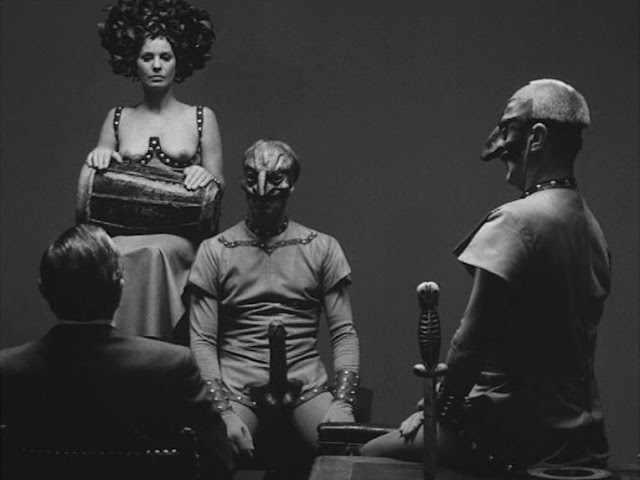 The Rite, as I remember it, is Bergman's kinkiest, and maybe his angriest, film. There are sex toys, censors, and a cruel, expressionist-cum-fascist B&W visual sensibility; the story deals with artists who are brought up on charges of obscenity. It's the only Bergman film that ever made me think of Crass. (Fans of blasphemy - the concept, not the band - should check this out; it was the target of censorship in England back in 1979). I've recommended it on Facebook to Robin Bougie. It is also the only Bergman film that makes think of Robin Bougie. This is not a particularly easy Bergman film to see, which is more than enough reason to check it out; I was stunned when I first saw it at the Cinematheque, at a previous Bergman retrospective, since I'd heard nothing of it previously and expected something minor and forgettable. That it is NOT. And where better to be on a sunny summer Sunday than at an angry black and white Swedish arthouse movie? 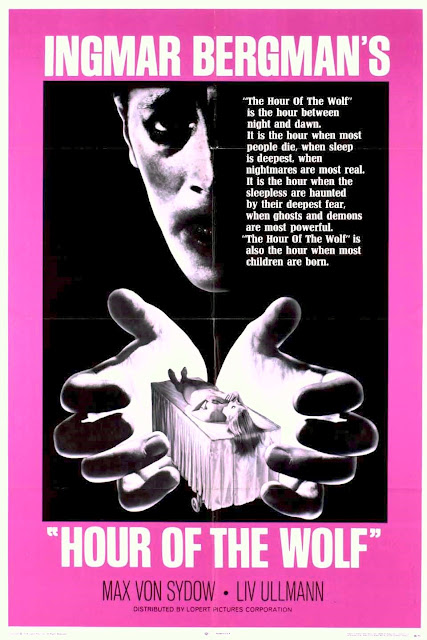 Hour of the Wolf - long referred to as Bergman's noir - is better known, but what's not to love about a film about the madness that plagues an artist (the much-loved Max von Sydow), suffering persecution delusions and disturbing sexual thoughts, whose wife (Liv Ullmann) finds herself tormented by the same demons (or are they merely neighbours at a dinner party)? There's not much of a punchline to the film - it ends on a whimper, not a bang - but otherwise it's one of Bergman's most visually striking films: Gothic/ expressionist noir, with a surrealist edge (see below). People who think of Fanny and Alexander as their primary visual reference for Bergman should see this film, to expand their sense of what he was/ did/ could do. I wonder if Kubrick thought of it when making Eyes Wide Shut? 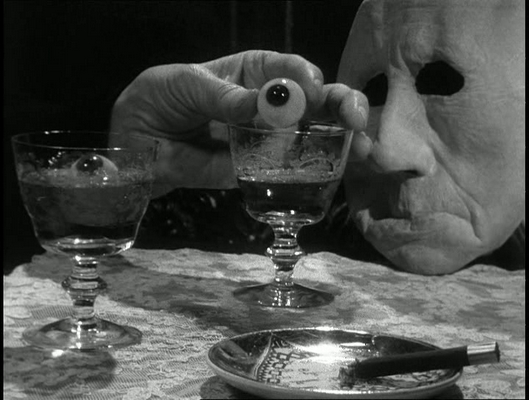 The Shame, meanwhile, also starring von Sydow and Ullmann, shows a couple trying to live during the outbreak of warfare. Their bonds are strained and morality tested (and ultimately compromised) by the need to survive. It touches, also, on what it is to be a refugee, with maybe the bleakest ending of any anti-war film I've seen. Whoever said that it was impossible to make an anti-war film without simultaneously glorifying war never saw this film. It also has the funniest "attempted chicken killing" scene in any movie ever (as I recall, the chicken makes it out just fine). I'm trying to be hyperbolic here, to sell people on this triple bill, but it's still a great film (and a great film to end this very varied but potent triple Bergman bill.) 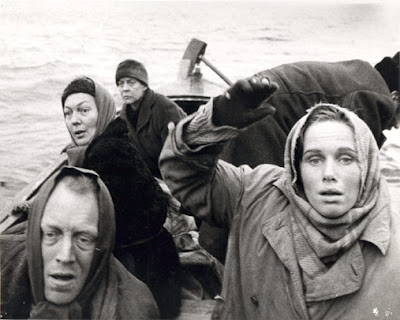 In short, if you've only tried The Seventh Seal and Persona, say (or Fanny and Alexander, on the other pole) and decided you don't really like Bergman, this is a hell of a day to come out to the cinema. You WILL need to re-evaluate the man, and you'll see three great films to boot. Who needs sunshine and beaches, anyhow? You'll leave the theatre feeling the November of the soul. 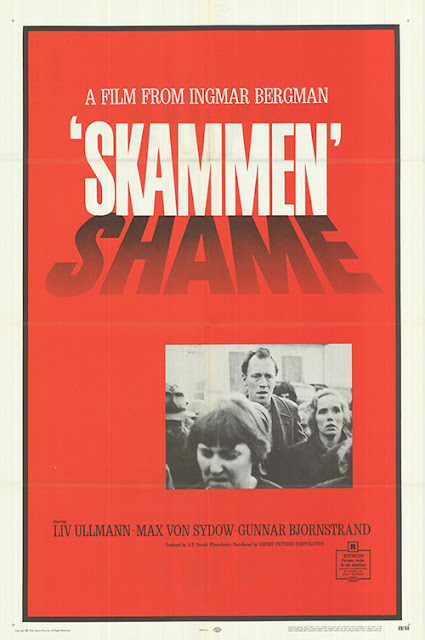 Note: there are other Bergman movies playing this nearly-finished retrospective. I'm sellin' Sunday as a not-to-be-missed event, but for other movies in the Cinematheque's Bergman 100 retrospective, see here.
Posted by Allan MacInnis at 9:38 AM