An Angelic Coincidence: No Exit Twice in One Day!

I've been mildly obsessed with artful 1970's Australian pub-rockers the Angels for a few years now - since their original frontman Doc Neeson commenced his ultimately losing battle with brain cancer. I spent a year listening to them almost non-stop on my phone in the hopes that somehow appreciating Doc's music might help - superstitious nonsense but whatever - in his recovery. In fact, my revisiting them in a big way dates back to even before hearing Doc was sick: there was a brief period maybe ten years ago where he was reunited with the band and they were touring Australia, and I had hopes they might make it this way. The band had, after all, a brief period of success in North America, back in the early 80's - though their label (Epic, I believe, at the time) had them redub themselves Angel City, for North American consumption, lest they be confused with that glam rock band Frank Zappa was so mean to, Angel. I was following news of that reunion tour on Myspace, back when Myspace was the social media site of the moment, long before Doc was diagnosed. They never did make it back this way - so I never did get to see them live - but it was a definite return to my roots, rock music-wise, and the beginning of several years of backwards-looking music consumption for me - because as a teenager, I had Dark Room, Face to Face, Night Attack, and Two Minute Warning, and thought they were all fine rock albums, creative and thoughtful but also riffy and tuneful and fast. They're just this side of punk, with a definite Australian flavour, which made it really easy to imagine them in the company of bands like Rose Tattoo or even AC/DC; except their lyrics were way smarter, with Neeson occasionally getting downright Dylanesque (see "Wasted Sleepless Nights/ Darkroom," for instance.) Turns out what I liked as a teen sometimes has become what I love as an adult. Since getting back into them, I have spun their North American releases more frequently than I ever did back then, and even stumbled across a few Australian releases of their early albums, sometimes in quite unexpected places (including a Coquitlam thrift store). They're terrific albums, under-appreciated, and way up there on my list of favourite underdog rock bands, along with Goddo or, I guess these days, the Blue Oyster Cult...

Anyhow, when I started to actually hear some of their Australian releases - and started to explore online - I also began to realize that some of their best songs, like "Save Me" and "Mr. Damage," weren't even included on those North American LPs, which freely cannibalized the first four Angels albums, presenting the songs that most appealed to record executives, but in different orders, with different recordings of them, and sometimes moved from album to album. Their first album and No Exit, their third, got the worst of it, since - unlike Face to Face, Dark Room and Night Attack - there was actually no corresponding North American release; about half the songs on No Exit end up spread out on the Angel City Face to Face and Dark Room releases, replacing songs that I guess the execs didn't like ("Outcast," say, which is on the Australian Face to Face but not the Angel City version). The changes were sometimes painless - "Ivory Stairs," which closes No Exit, ends up the second cut on the North American Dark Room release, but is great on either album. But why not, as a fan, hear the albums as they were first released, in the country the band actually was based in, as their original fans heard them? (And check out all the songs that didn't make it over here, to boot...?).

It certainly hasn't been a hobby that I've had any competition in. There are a few other local fans that I've run into, including Billy Hopeless, wendythirteen, and Steve Newton,  but I should imagine they are all content with the Angel City releases. If they have original Angels albums, they haven't been trading them in; I've only seen (and bought) three of them since I took an interest, tho' I've seen plenty of the Angel City albums while I looked, diligently peeking every time I go to Audiopile or Red Cat or Neptoon or Noize or Zulu or any other used record store, in case they had something. I finally wearied of the search a few weeks ago, and asked to see if Red Cat could get in No Exit on CD. There are people selling the LP on eBay, but they want $25 for shipping from Australia, and none of the sellers I've written are willing or able to combine shipping to send me OTHER Angels albums that I want, to make an order more practical. I even wrote an Australian record store, Clarity Records, who told me that the Angels were enjoying an upsurge in popularity over there and they had nothing in at the moment (which was disappointing on the one hand, but on the other, it did my heart some good to hear that the band was enjoying a resurgence in their homeland. I wonder if Canadian kids will ever get back into Goddo?).

Anyhow, yes, Red Cat, I was told, could bring in the album on CD. I'd really rather have it on vinyl, but to heck with it. I resign myself to the fact that I will never, ever see it at a Vancouver record store, and that I just can't justify ordering it from Australia. I can make do with it on CD.

It takes about two weeks. There's a side story to all this where Dave Gowans, I think, leaves me a phone message in a pretty convincing accent pretending to be a member of Tears for Fears, to tell me that the CD has come in. I still don't really understand what that was about. It was pretty funny, but a bit random; I mean, Tears for Fears? They aren't Australian, are they?

That was earlier this week. I made the trek today to pick up the CD (via Ford Pier, who revealed that the "sexist" album cover for Expensive Tissue people are complaining about below is in fact an image of David P. Smith's armpit - but again, that's a side-story). So now I have it. There are no bonus cuts, sadly, and it even looks a bit burn-on-demand, but fine.

While I'm in the neighbourhood, I mosey down to Neptoon, to see if they have other albums I've been hungrying for, and, like I always do, I check the section, just in case.

Guess what they just got in? 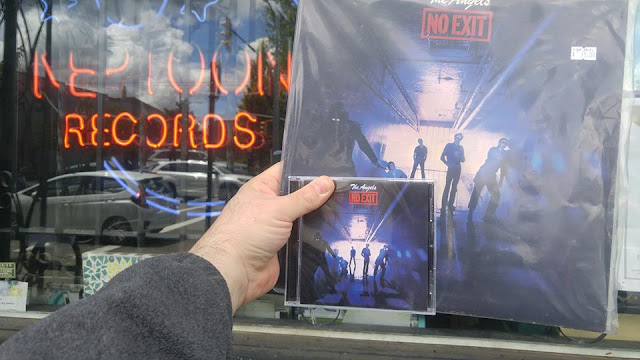 Posted by Allan MacInnis at 3:35 PM