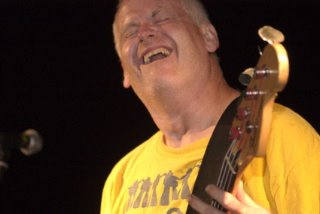 (Photo of Rob Wright taken by Yari in Italy, borrowed shamelessly from the website linked below. Yari, if you object, let me know! -- I'm assuming no one will care or notice. I'm not sure yellow is Rob's colour -- it's a bit shocking, wot?).
Locals who measure out their lives in terms of Nomeansno gigs will be happy to know that the band will be playing June 29th in Vancouver, as part of a CD release party (which is news in and of itself -- I wonder if they'll actually do the Mission of Burma cover I chatted with Tom about at the Mission of Burma gig awhile back? I suggested "Fun World" and he said that band had been thinkin' of doing "Outlaw." Either would work... Note: new Mission of Burma album coming soon! Now if only we could get a reissue of the Volcano Suns' All Night Lotus Party... apparently you can download it here). To put a cherry on the fact o' the gig, Nomeansno will be playing with the heavy Italian avant-jazz unit, Zu -- who have recorded with The Ex and others, so they're no stranger to rock. Zu will also be performing with Mats Gustafsson at the Commodore and the Culch as part of the jazz fest that week).

Seeing Nomeansno live is like therapy for me -- once a year at least, I need to mosh to "The River," to purge myself of the pain of being constantly made aware of how true the lyrics are... Nothin' spells catharsis like that song.

The first glimmers of a good musical summer on the horizon... Hmmm...
Posted by Allan MacInnis at 3:07 PM