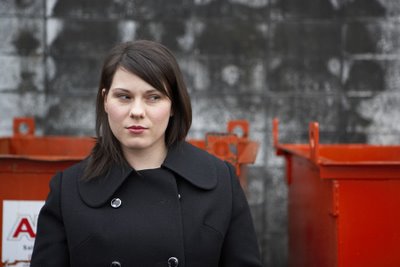 Odd to see someone you grew up with succeeding at what they do. It's almost as strange as starting to feel like you're making some headway yourself... I've known Elizabeth Bachinsky for longer than anyone else in my circle, growing up with her in the suburban-white-trash backwater of Maple Ridge, where the absence of cultural artefacts (aside from the odd neon sign or the Coke cans in the ditch) played a role in our development into creatures hungry for art, literature, film, music, knowledge, and so forth -- though it's really only since that Damo Suzuki show where we ran into each other that we've been socializing regularly (Damo leapt down from the stage, hugged me and kissed her... it was the sweetest thing I've seen a performer do and not at all a bad memory to share in common with someone). It's starting to seem like the day may come where those early chapbooks I have of hers (Skylab and A Grease Fire in the Diner of Your Heart) are actually going to be worth money -- too bad it probably won't be in my lifetime, but this IS Canadian poetry we're talking about. Liz has had two books published this last year, one through Bookthug (given a glowing review here -- I pitched in on a few lines of her anagram of -- all of -- TS Eliot's "The Wasteland," by the way, tho', as fond of anagrams as I am, I couldn't possibly make it through the whole of that poem, so hats off to her) and one through Nightwood Editions, Home of Sudden Service, which is the more personal of the two and speaks to our shared background in a way I find jarring, recognizable, and oddly comforting -- to know that someone else with aspirations could not only survive the 'burbs, spiritually speaking, but live to write about it, and well... Elizabeth will be shortly embarking on a cross-Canada tour, reading at some fairly significant venues, beginning on April 20th in Vancouver, in conjunction with her cohorts Michael V. Smith (aka Cookie LaWhore) and Jennica Harper, both of whom are also launching books. (Matt Rader of Mosquito Press will also be on the bill for the Vancouver gig and is also a fine writer indeed). The event will occur at the downtown UBC bookstore at 7 PM. I've never yet seen Liz fail to win the audience when she reads; Michael I know better for saucy jokes, his novel Cumberland, and his gender politicking more than I do for his poetry, but he's always engaging and thought-provoking. Jennica I don't really know, tho' she has a fine title indeed for her newest book, The Octopus and Other Poems (how deeply pleasing to imagine an octopus as a poem). April IS National Poetry Month, after all -- or so Liz tells me, and I assume she'd know. Read more about the tour and the reading here, on Michael's site -- and come to the event! April 20th, 7pm. Mark the calendar NOW...
Posted by Allan MacInnis at 4:25 PM