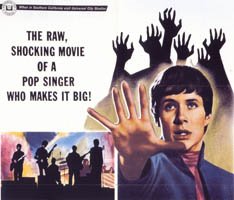 Exciting news: Peter Watkins' PRIVILEGE, a rarely-seen film of his made for Universal just after his controversial THE WAR GAME was banned from the BBC, will be screening at the Pacific Cinematheque as part of the upcoming Big Smash Festival, on April 20th. Kier-la, to her surprise, scored the print directly from Universal, who apparently struck it about 5 years ago for festival purposes (and have yet to make plans to release it on DVD). Oliver Groom, the man behind Project X, who have distributed three of Watkins major films on DVD, says "its very nice;" Privilege is one the Watkins' films he would like to see released, but says that discussions with Universal "have foundered a little." (See last months' articles on the "censorship" of the new print of Cassavetes' Love Streams and the chopping up of his Husbands -- as written about by Ray Carney --for an indication of just how much Sony seem to care about film as art; and watch these pages -- or this screen, I guess -- ? -- for more of my interview with Groom). By the way, I'll be writing about Watkins' PUNISHMENT PARK for the May issue of Discorder and screening the film (on DVD, that is) on May 30th at Blim. It is long past time that people knew this man and his films. I will probably mention the May 30th screening in every second post from now on...

Oh, also: in the odd event that a Peter Watkins fan stumbles across this and doesn't know, THE GLADIATORS is now available on DVD... One wonders if Watkins sometimes feels suspicion about the slow increase in excitement about his films -- since its linked in part to the elite shopping activities of film buffs...
Posted by Allan MacInnis at 2:01 PM