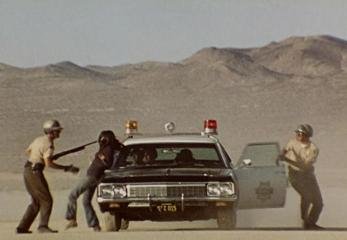 (above: a still from Peter Watkins' Punishment Park).


Since Privilege is screening at the Cinematheque this week, I thought it would be timely to put up some comments from Oliver Groom on distributing Peter Watkins' films, which he has been doing through his Toronto-based company, Project X. See my column in Discorder in May (the current one is on Fassbinder) for more on Watkins, focussing on Punishment Park, which I'll be playing at Blim on May 30th. I'd never heard of Watkins -- save for a couple of comments from friends about The War Game -- until I stumbled onto Punishment Park and was intrigued by the box art; if it weren't for the earnest efforts of Mr. Groom to bring Watkins back from total obscurity and marginalization, I probably would have never explored his work -- I wouldn't have had the opportunity to see it, for one, though the Cinematheque DID screen Edvard Munch a couple of months back (their site includes a link to more press material on the film, through Capri films). The interview with Mr. Groom follows...

1. On the reception of Punishment Park:

Punishment Park is being very well received, both critically and by the public, who unsurprisingly respond strongly to the political and the dramatic content. I think that many are surprised at how effective and topical it still is and wonder how it has remained undiscovered for so long. I've seen a couple of reviews that dismiss it for being dated and naive but these are more the exception. DVD sales have been ok but not gangbuster. Such is the fate befalling older indies without star names or reputations. There is a small hard core of Watkins afficionados but obviously, to be worthwhile from a release economics point of view, we have to go beyond these and I think that we're getting there. As far as I'm concerned it's also very important to get the film out there without compromising it.

2. On the Masters of Cinema edition

There was no serious competition from the MoC release and vice versa, principally because we're talking about different countries and different TV systems. In fact, we (MoC and I) collaborated somewhat in that I provided them with stills, the commentary and Watkins intro.
I think that Peter feels a little less marginalised. He gets regular e-mails through his website (and so he may well reply to yours...) from the aforementioned hard core and from newbies who are discovering his work. However whether he will have the opportunity to return to filmmaking remains to be seen. I know he'd like to and, if that happens because his star has risen a bit more on account of these releases, that would please me enormously.

3. On Watkins the expatriate, his experiences in Canada, and meeting Groom

Peter's currently living in Vilnius. He and his wife Vida have considered moving to France. They were in Canada for about 2 1/2 years and I met him in late summer 2003. About 3 years previously I had suggested collaborating on a Watkins retrospective with the Cinematheque Ontario but they blew me off (although they did finally go ahead with it in March 2004). I was aware of Peter's work but mostly he'd slipped off my radar after Punishment Park because of the increasingly lack of proper releases his films were getting. I was moving ahead with setting up this DVD label in 2003 when I found out that he was living in Hamilton - about 100 km down the road! He was initially a bit diffident about meeting up but we did and we talked about the problems his films had had over the years. In particular he was concerned about Edvard Munch and apparent damage to the original negative, etc.. Well, one thing led to another and the DVD series was born. In spite of the Cinematheque Ontario retrospective and involvement in the restoration and new video transfer of Edvard Munch, Peter was not happy in Canada. He'd had a bit of a bust-up with the NFB and he wasn't getting the opportunities to work and so he and Vida returned to Lithuania in June 2004.

I first saw Punishment Park back in 1972, when I programmed it for a university film society that I was running back in England. I remembered it vividly but hadn't seen it since. That day I first met Peter, he kindly lent me a copy of the French release DVD and, since it's one of the films for which he retains the rights, soon afterwards we agreed a deal so that it could be my first DVD release. There are a number of good reasons why this was the best title to launch the series with: it was immediately available and had been recently re-mastered to video in France; it's a US subject; it's dramatically more direct than some of his others ( - that's not a criticism of the others, I hasten to add!). An important part of rekindling awareness of Peter as a filmmaker is to take advantage of "recognisability" and, for Punishment Park, this involved presenting it as a political thriller (again without compromising it). Meanwhile Edvard Munch has a different kind of recognisability and arguably a different (older) target demographic. So to follow Punishment Park with Munch is, I think, to expand the potential awareness that we're striving for. Currently US sales on Munch (release date 21st Feb 2006) are running at about 60% of those of Punishment Park (release date 28th Nov 2005) but I think that, in the long run, Munch will overtake it.

The Gladiators has just been reviewed by Glenn Erickson.
This will be followed by The War Game/Culloden on one disc. Then there will be The Freethinker, which will be a challenge (4 1/2 hours) but I haven't started work on it yet. We've spoken about The Journey (14 1/2 hours!) but that's even trickier and so I don't recommend you hold your breath for that one. Meanwhile we have tried to work something out with Universal for Privilege but those discussions have foundered a little. Other titles (Eveningland, The 70's People) are merely possibilities at this stage. And, finally, one of my pet ideas is to publish in print or CD-ROM form a script that Peter wrote in 1968 or thereabouts called Proper In The Circumstances, which was a big project that didn't happen with Universal and Marlon Brando about Custer and the Indian Wars: it's very violent and very Watkins.

6. On net rumours that Punishment Park was "banned"

I don't think that anybody has come up with a White House directive banning Punishment Park! I think that things happen more subtly and more insiduously in the States. I haven't seen much right wing vitriol poured on it. The World Socialist Web Site was negative from the other perspective and I saw one UK review that took the opportunity to have a go at hippies (duh!).

7. Rumours of a Watkins bio

I was in touch last year with one of the guys writing this new book about Peter for Manchester University Press and he said that it was being targeted for early 2006 but it's been very slow coming and I didn't really believe that that would happen then. Hopefully it will be out eventually.


(...thus ends Mr. Groom's interview. He's been most facilitating of the article and has expressed his happiness that Privilege will be screening here -- cheers to him, both for the interview and for making it possible for film geeks to actually SEE Peter Watkins films, and cheers yet again to Kier-la Janisse for her amazing skill at organizing festivals in Vancouver from Texas). Interested parties might want to note that one other of Watkins' films is currently available on VHS, La Commune, distributed by the NFB, who also sell a documentary on his work, on both VHS and DVD, The Universal Clock.
Posted by Allan MacInnis at 8:57 AM