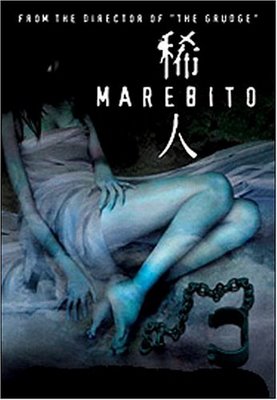 Just saw a very disturbing bit of horror cinema -- something that could probably only be made in Japan; Marebito, directed by Shimizu Takashi -- who made Ju-On and it's westernized remake, The Grudge -- and starring cult director Tsukamoto Shinya, of Tetsuo fame (he also plays the scheming cop in Miike Takashi's Ichi the Killer -- and is the guy in the little picture on the left). This is one of those rare films that one really profits from knowing very little about, on entering it; the odd twists and turns that it takes you on can only be diminished by my offering even the slightest description, so I'm left in the difficult position of trying to recommend a film I really can say nothing about. Trust me, if you're a horror buff and want to see something creative, don't seek any other sites out for more information, just find the film and watch it. It deals with voyeurism, obsession, and the twisted ugly things that lurk in the human subconscious (or perhaps just the Japanese subconscious -- but find me a people more comfortable dragging their insanities out into the open in art. It's my thesis that it's only because of the extreme degree of social order, security, and conformism that one finds in Japanese public life that they can afford to delve quite so deeply into the darker closets of their minds, in films like these... In a society where social order is far more fragile, like ours, a work like Marebito would be regarded as so threatening that only the most aggressive and pissed-off surrealist would even contemplate making it -- and he'd have a hell of a time getting it financed...). If you MUST read more on Marebito, here's a link to the IMDB listing, but I highly advise just trusting me on this one and finding the film... It's a very creepy experience.

Oh: serious Tsukamoto fans in our damp city are advised to scour their nearest Book Warehouse for the Tom Mes book, Iron Man, about his life and films; it's been marked down to $14.99 and there are a few copies still out there...
Posted by Allan MacInnis at 11:44 PM