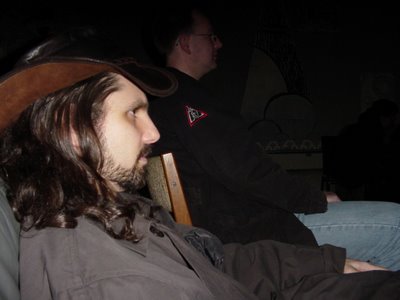 Come Sunday, prior to the final screening of Love Streams (see below), you will find me flipping (and, I hope, eating) pancakes at Vancouver's first (annual?) noise pancake breakfast at the relocated Blim. I suppose we could also call it our first pancake noise breakfast, tho' that does suggest that the pancake is the source of the sound... A mild sizzle, the scrape of a spatula on a pan, the gentle sigh of releasing air as it is flipped... Ahh... A description of the event follows:

Dear friends.. we are pleased to invite you to a noise event.

Eric Lanzillotta (Allan asks: anyone got a better site for me to link?)

Eric Lanzillotta has been involved in sound in various aspects over the last two decades. In this time, a few fragments have been released for public consumptions on labels such as Anomalous Records, Selektion, Alluvial Recordings, Beta-Lactam Ring Records, RRRecords, EE Tapes and Jnana Records. Some of these recordings have involved collaborations with Ralf Wehowsky, Andrew Chalk, and John Hudak. He has also contributed to recordings by Hands To, AMK, Ultra, Edward Ka-Spel and irr.app.(ext.). As a live performer, he has appeared in United States, Canada and Japan, both solo and in duets with Bernhard Gunter and Aube.

Sistrenatus comes forth as a bleak industrial presence against a backdrop of harrowing white noise and dark ambient textures. The audible essence of degeneration and decay. Cold Spring Records will be releasing Sistrenatus' debut album "Division One" in 2006.

Coelacanth (Allan notes: I have no handy links for this band, but I have corrected the spelling of the name, and if anyone wants to read about the fish, they may do so here).

pbe provides protection for his instrument during transit and should be retained in case subsequent shipment becomes necessary. Repackaging instructions can be found in section six of his manual. all sales final.


alienatedinvancouver.blogspot.com assumes no liability for hearing loss, ear damage, or indigestion as a result of your participation in this event.
Posted by Allan MacInnis at 2:43 PM