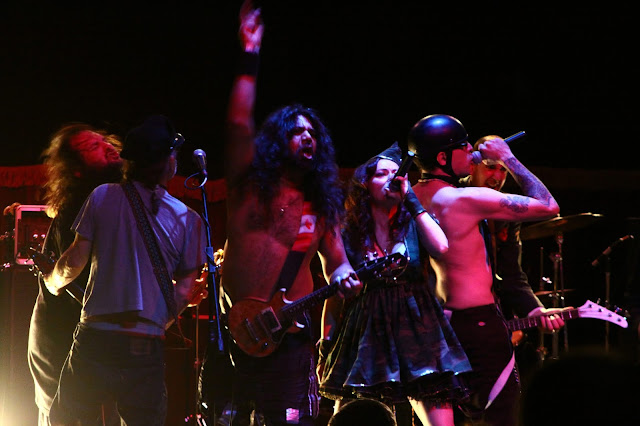 Little Guitar Army by bev davies, Feb. 24 2012 at the Rickshaw, not to be reused without permission
Sonny Dean is sitting across from me on the Main Street bus, singing Saxon's "Princess of the Night" through his COVID mask. He's been telling me a story about taking the lead vocal on the song during a rehearsal (virtual? Not?) with his new band Grogan. "I can sing just like Biff Byford," he says - I'm taking his word for it, because I don't really know my Saxon (tho' I saw them once, years ago, opening for either Maiden or Priest; I forget which). I am not really a singing-on-a-public-bus kinda guy, and I glance around nervously, hoping none of our fellow passengers but I gotta admit, Sonny does sound good. 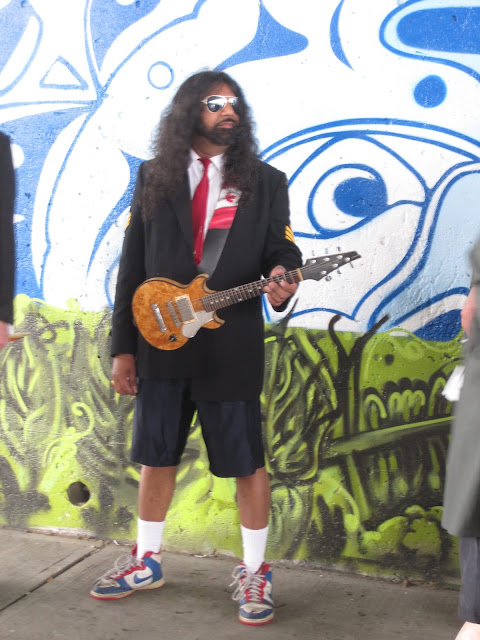 Sonny Dean by Erika Lax, not to be reused without permission. Dig the shoes!
Sonny Dean, if you don't know him, made a huge impression with his contribution to Vancouver's now legendary Little Guitar Army - a band whose mix of rockstar-sized egos, larger-than-life-personalities, and substance abuse issues shoulda doomed them to a far shorter run than they actually had, all things considered, but who actually survived, in a few different incarnations, for several years, long enough to release one CD and get a cover story on the Straight. 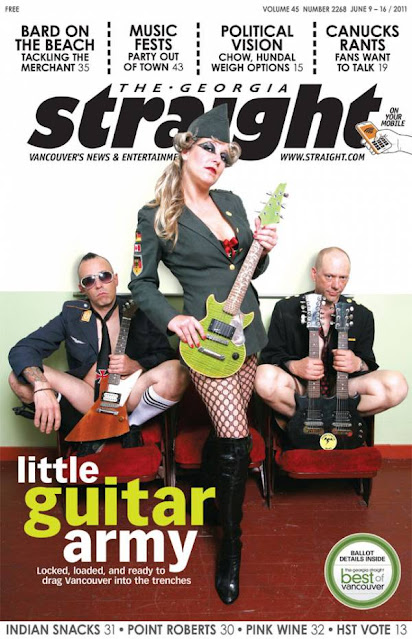 And of course their rock video for "30 Watts to Freedom" will forever be one of the greatest rock videos ever made in this city. Sonny seemed one of the sweetest guys in the band and was the only one to have his nipples prominently displayed on the CD art. 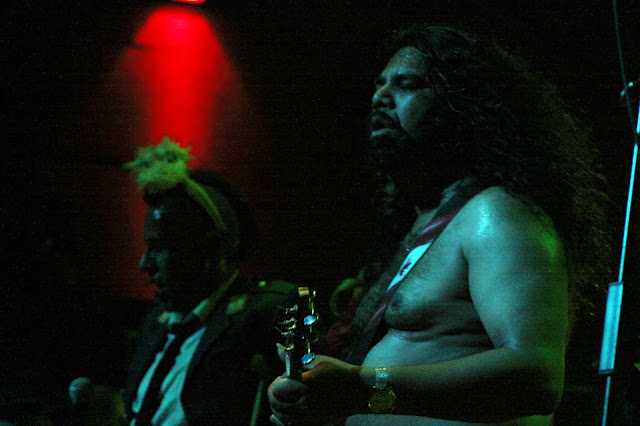 Little Guitar Army by bev davies, at Ron Reyes' 50th birthday bash, July 24 2010 at the Rickshaw; not to be reused without permission
But Sonny is also an actor and a frequent extra in local movie productions - the most famous of which by far is the Will Ferrell Christmas movie Elf, which I interviewed Sonny about here. I thought this might be a fun thing to do: for a bunch of us, in our separate COVID bunkers, to watch Elf, then have a Zoom chat with Sonny that everyone can participate in, where we get a unique local behind-the-scenes perspective on the making of the movie. (Granted Sonny only has one scene in the film, but he does have other stories he can tell, too!).  We'll also talk about his musical history a bit, from his younger years in PEI to his time in bands like Street Urchin and pre-LGA Vancouver bands Typhus and Cornucopia. (Here's some great footage of him playing in front of the Hendrix Shrine...). 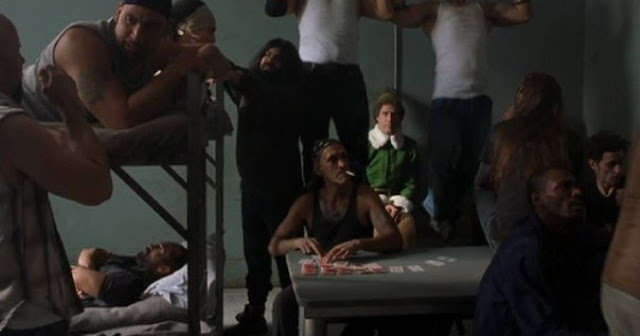 Sonny Dean in Elf, co-starring Will Ferrell
Sonny has had a rough couple of years healthwise, and worst of all, for a guitarist, lost the ends of two of his fingers (the pinky and ring finger on his left hand), which affects his guitar playing a little (he still plays, and is determinedly practicing every day, but has a bit of trouble bending the strings). But he is into doing something to celebrate Christmas, and Elf, and his birthday - a Zoom chat featuring a live interview between us and more. Since Sonny's birthday is on the 21st, we picked that as the date.
Here's how it will work, if you are interested in participating. Please read carefully! 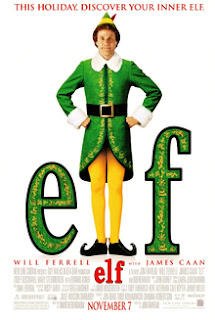 1. Find your own way to see Elf - it shouldn't be difficult! The DVD and Blu-Ray are easy to acquire and it's likely on Netflix and Prime and probably a ton of other streaming services. In the age of the internet, I figure people don't need too much help in this regard.
2. Sometime before the 21st, post a comment on this blog with your name and email address (I won't publish it) and/or shoot me a private message on Facebook, requesting the Zoom link. I will send it to you. (It is a bit risky to publish the Zoom link elsewise so only legit-seeming requests will be honoured).
3. Also before that, install Zoom onto your phone or computer. Again, this is a free service - go to their website at zoom.us and follow the steps. It shouldn't be that tricky, and it will enable you to make free group calls for Christmas - a very handy bit of software to connect with friends during our merry 2020 lockdown.
4. On December 21st, we all watch Elf, collectively, starting around 7pm. At 9pm, the Zoom meeting will begin - I hope with everyone who wants to be there in attendance. If you want to talk about other things you love about Elf (not involving Sonny, even!) you are welcome to, but it really should be Elf-or-Sonny centered. 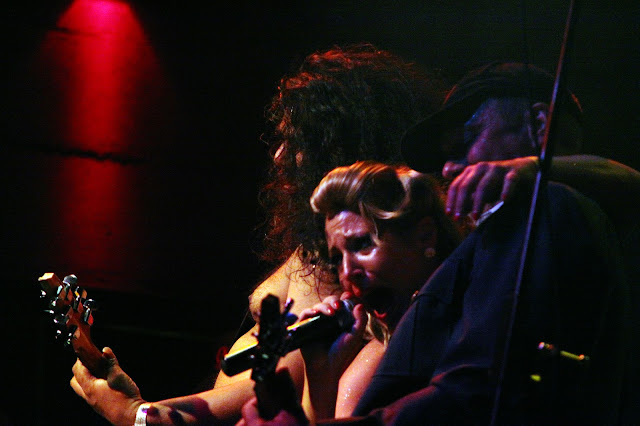 Little Guitar Army by bev davies, at Ron Reyes' 50th birthday bash, July 24 2010 at the Rickshaw; not to be reused without permission
Assuming all this goes well, I am also thinking of doing similar Zoom events on the 22nd, where we can separately watch and share the Alastair Sim version of A Christmas Carol (with maybe a special guest yet to be determined for a 9pm Zoom chat), and the 23rd, where a few of us are talking about watching the Toronto-shot Canadian Christmas crime film, The Silent Partner, with Elliott Gould and Christopher Plummer (glowingly written about here). Again, the idea is the same: comment or PM me for a Zoom link and meet at 9pm, having watched the movie, to share your impressions and so forth... we'll have more on that after the 21st - our trial run, it turns out (because how can we not synch this up with Sonny's birthday?).
Like I say, if you want to attend the Elf Zoom with Sonny on the 21st, leave a comment (I won't publish it) or shoot me a FB message and I'll provide a Zoom link! Hope to see you! 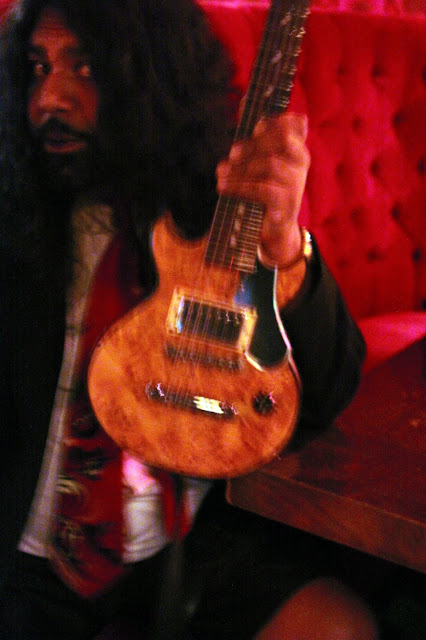 Sonny by bev!
Posted by Allan MacInnis at 9:03 AM