My wife Erika has more fun with Scratch and Wins than I do. While I can enjoy the gambling aspect of them, I go about scratching them in a banal, practical, boringly efficient way: I scratch as few numbers as possible, then, where it works, simply use my eyes to see if any winning patterns apply, costing me the least effort and determining if I won as quickly as I can. Erika, on the other hand, will try to draw out the experience, scratching first one number, then all its corresponding matches, before scratching the second number, making it more fun for herself by maximizing suspense and slowly letting the patterns unfold. It takes her much longer to scratch, and needless to say she doesn't win any more often than I do, but there is wisdom in her way; and while I am not inclined to adopt her approach for myself, I am perfectly willing to use my knowledge of it to inform, for instance, how I go about wrapping her Christmas presents.

This year, for example, I had bought her, among other things, several CDs, vinyl of a new Sharon Jones and an old Michael Kiwanuka, and, most expensively, a painting of a new Jean Smith that I'd been lucky enough to reserve (since the CBC article, Jean's paintings have gotten very hard to snag). As you might expect - in addition to being clumsy with fine motor work with my hands (AKA being a terrible gift-wrapper) - my banal, efficient approach has often been to not bother, when left to my druthers, with wrapping gifts at all, but that isn't in Erika's upbringing, and she even made us Christmas stockings this year to put smaller items in, as is her family tradition. For such a recipient - someone who enjoys both suspense and ceremony - the trouble with all of these gifts (CDs, records, a painting of the same size as two others we own) is that they have recognizable, tell-tale shapes; even wrapped, they would spill their contents the second I put them under the tree. Subterfuge, then, seemed prudent: I wrapped my gifts individually - sometimes even disguising their shape by putting extra packing around them - then put them all in a big box, which I also wrapped. The gifts could then be put under the tree early, without Erika being any the wiser as to what could be *in* that large box (she thought it was some sort of cooking appliance for steaming egg-bites). Mystery! Suspense! Ceremony! ...The wrapping was still shitty - clumsy folds, lots of tape - but the effect was exactly as I had intended. 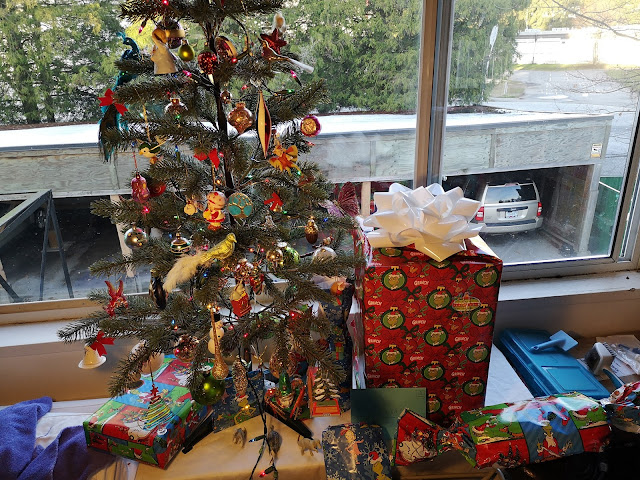 And so it went. We had a plan - per her family tradition - to open one gift before bed on the 24th. Of course, I suggested Erika open the big one, but pointed out that due to my subterfuge she should be allowed to open TWO gifts that night (since opening the box itself would reveal nothing but other individually-wrapped, concealed packages; hardly satisfying her curiosity or fulfilling her one-gift entitlement). I was very happy to see that the box that I put the Jean Smith in (inside the other box) disguised what it was right til she got the painting out. You can see the moment where the realization dropped in one of her expressions, below, as she said, her voice going a bit higher in pitch, "Is it a Jean Smith?!"

Anyhow, the following photos tell the story well enough! There are a few from the next morning, with Erika unwrapping a cat toy, too, and me showing off a new shirt (I am leaving out the one of me holding up my new Blue Oyster Cult record - the Heaven Forbid repress!). 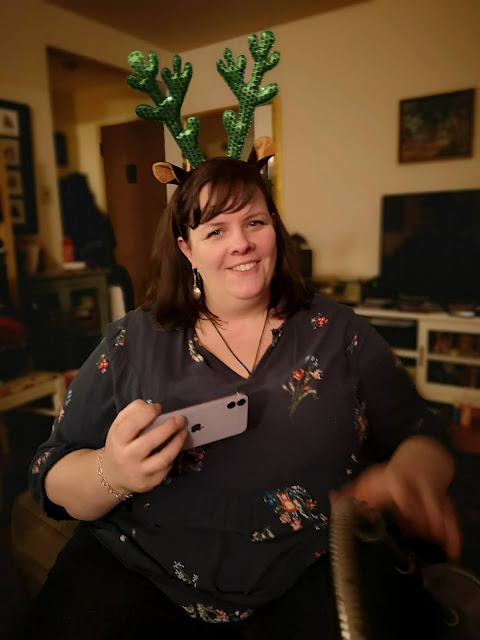 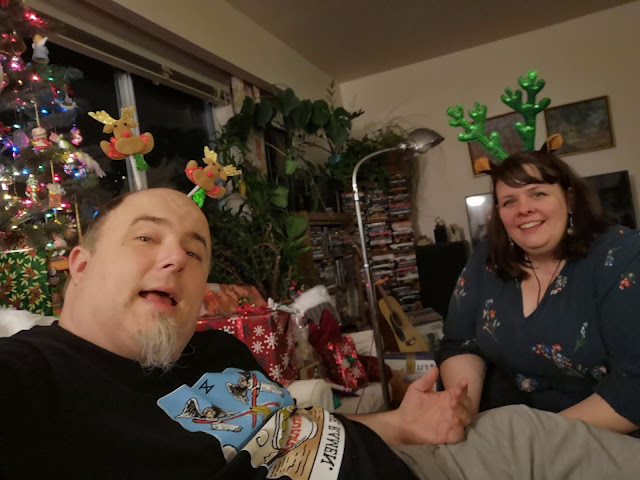 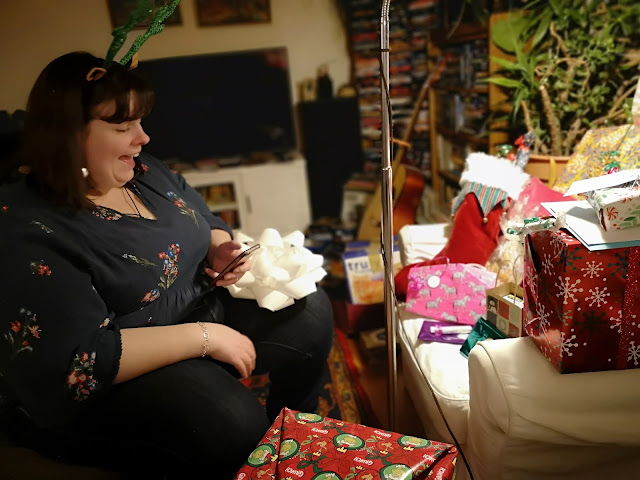 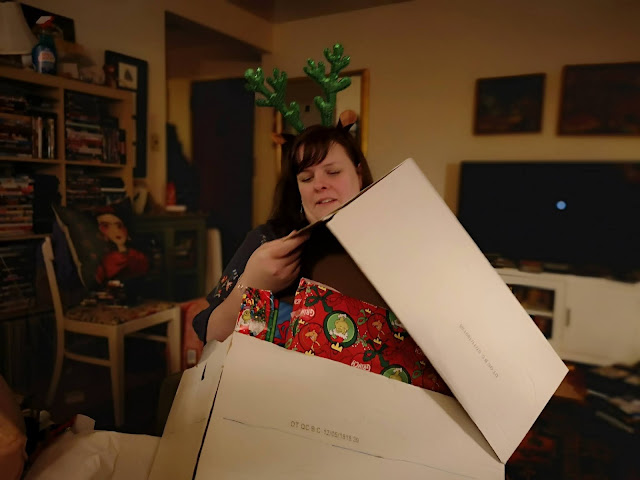 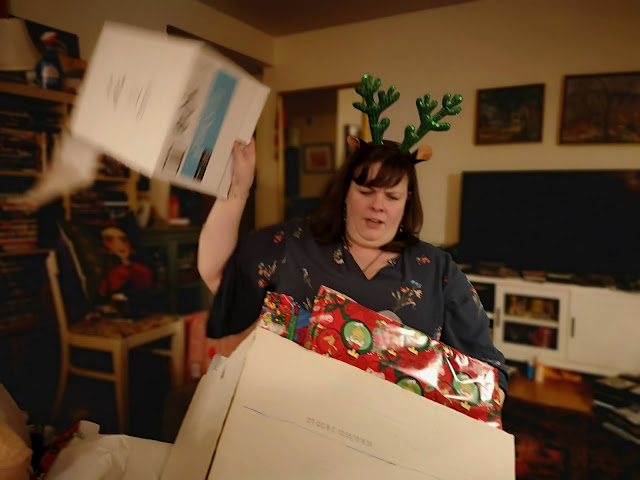 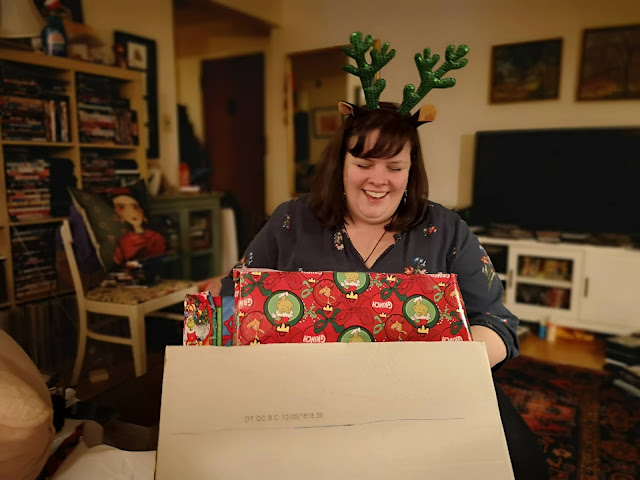 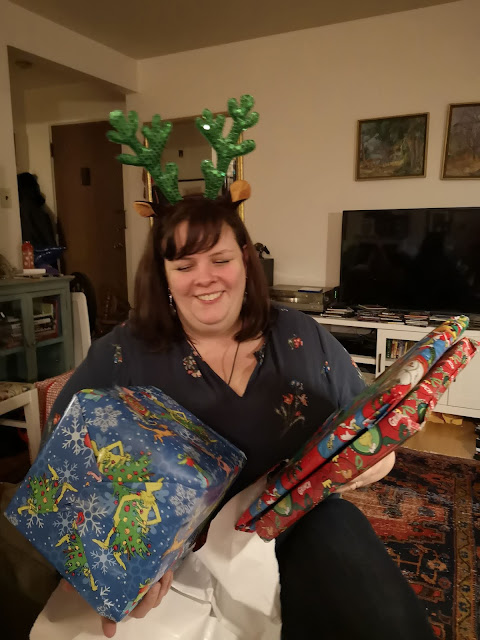 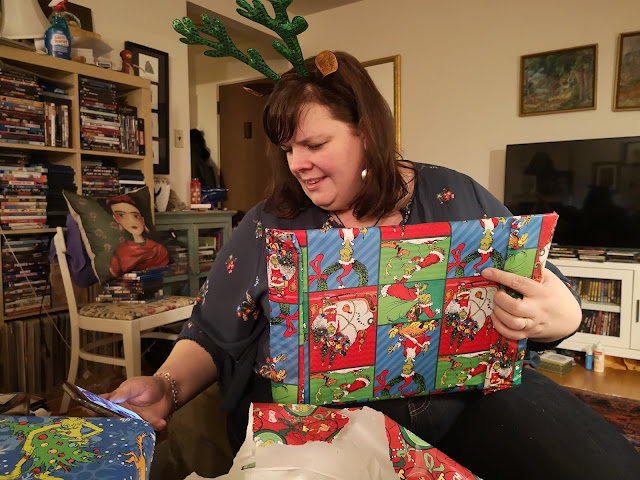 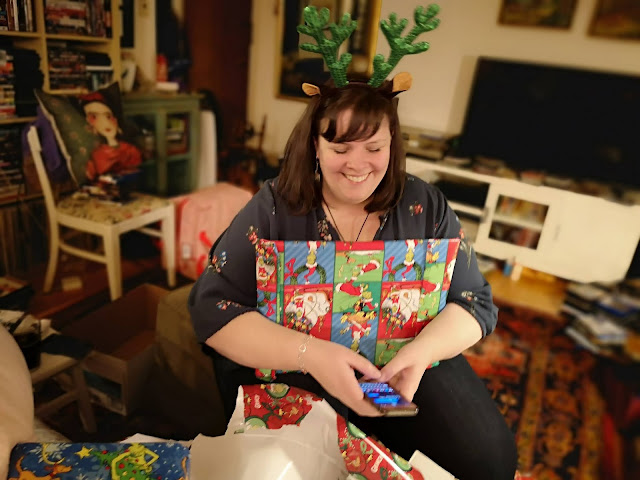 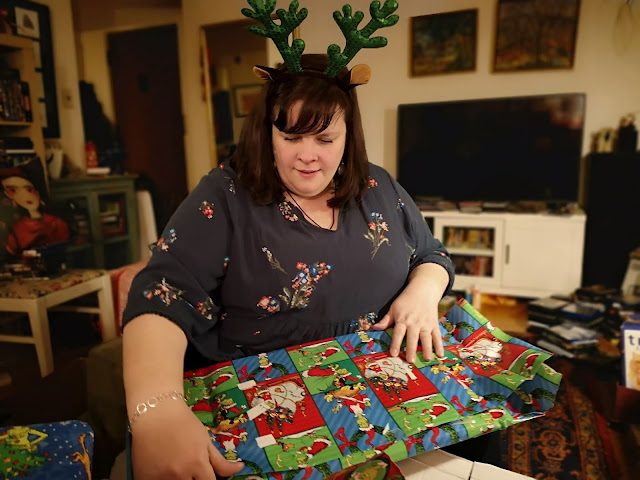 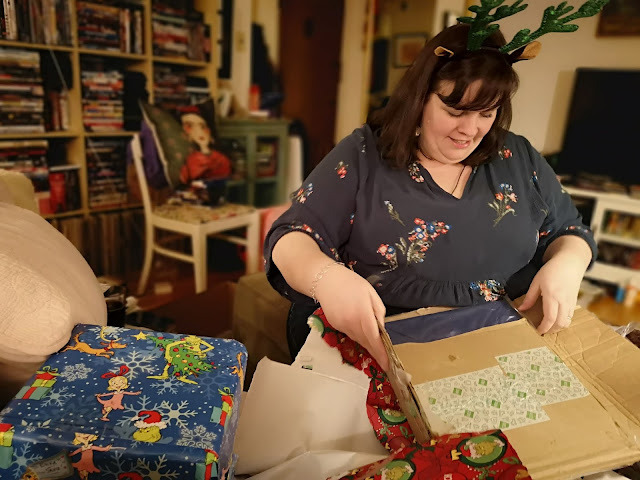 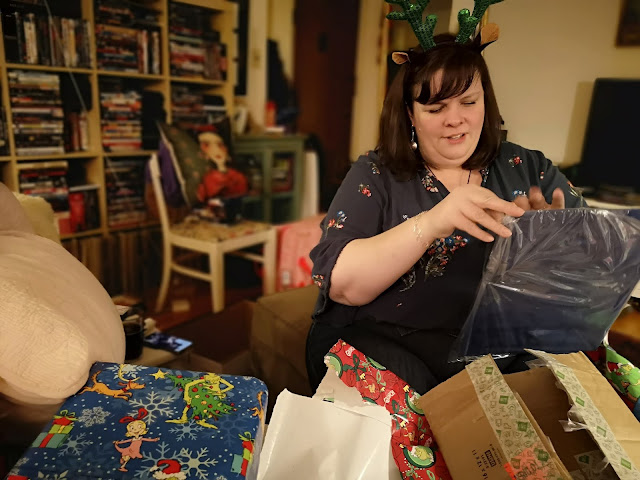 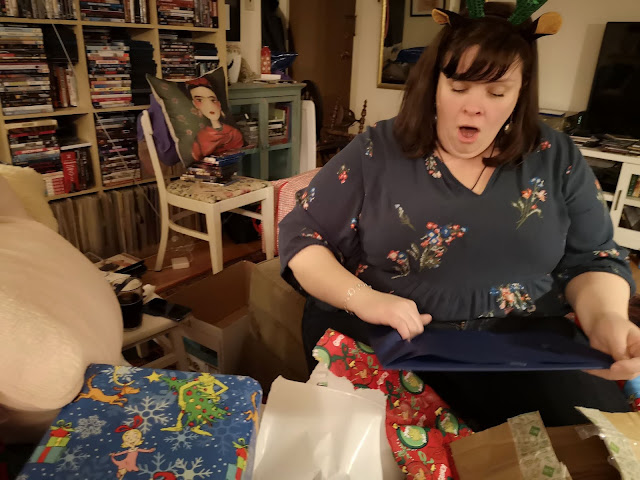 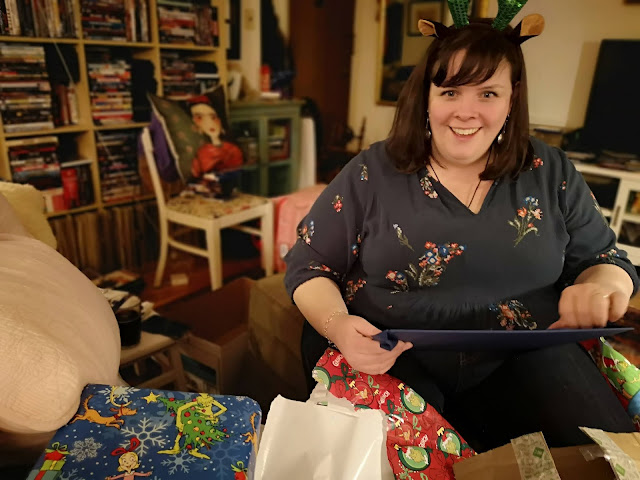 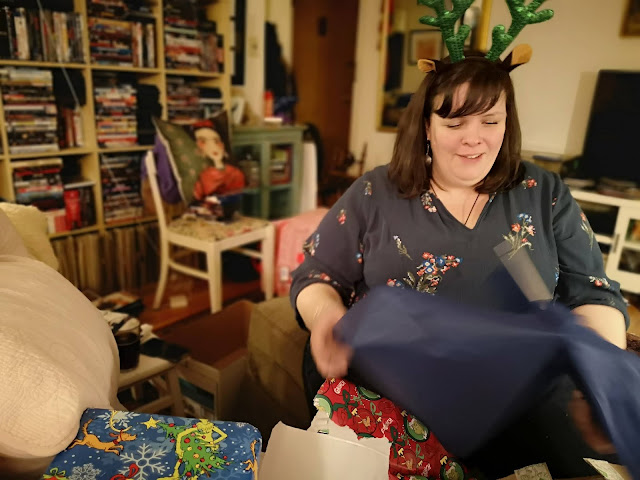 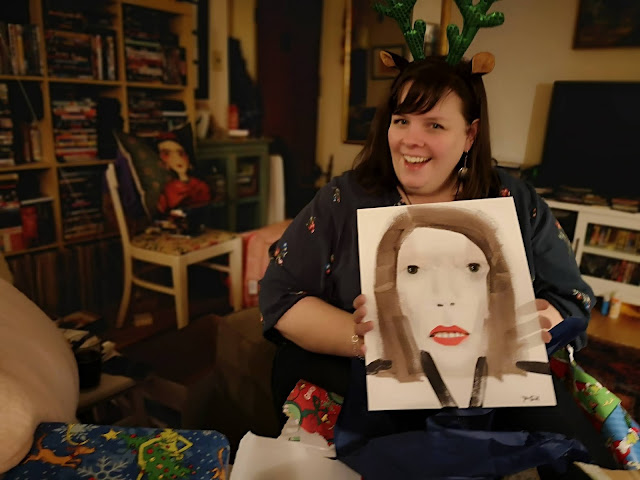 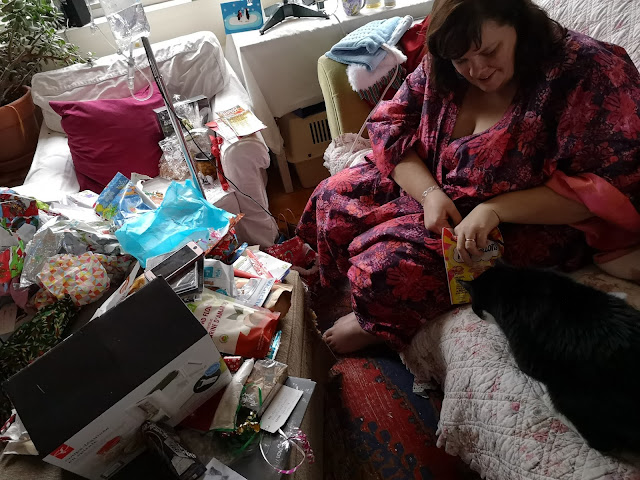 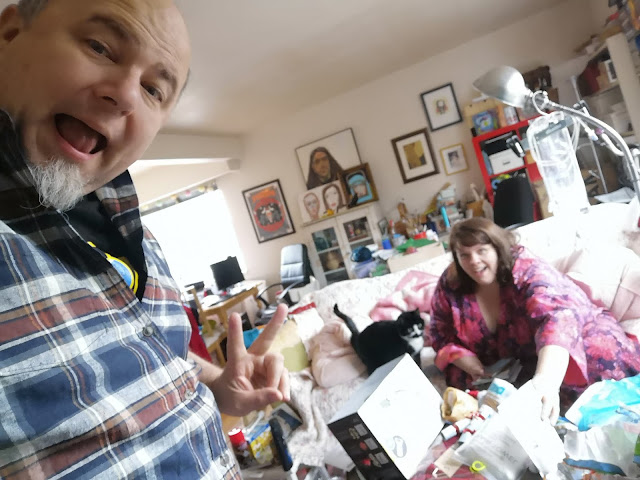 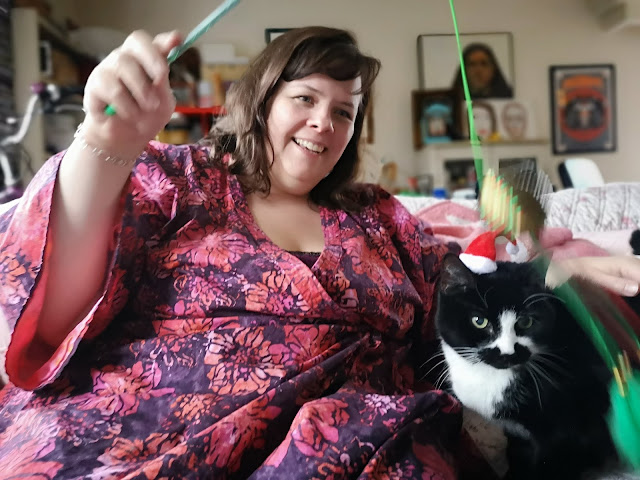 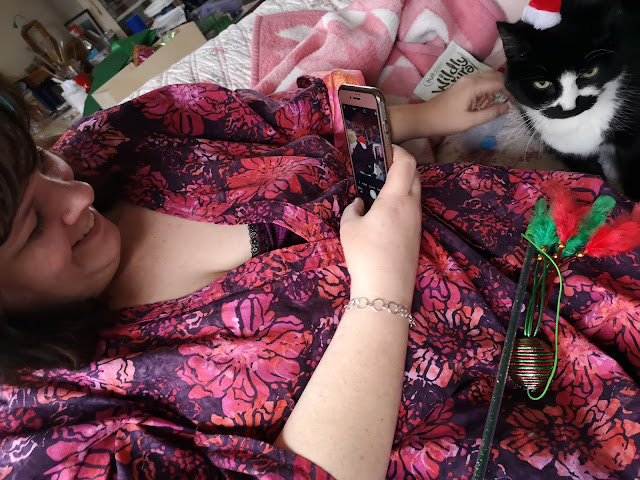 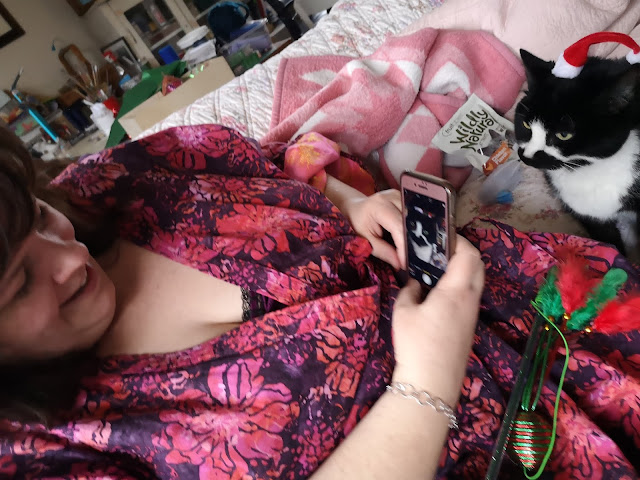 Pretty great Christmas, though now we have to clean up the apartment... chaos everywhere. I hope other people had even half as delightful a Christmas as I had. I'm a lucky guy - Erika missed her family a lot this year, but I loved having her all to myself.
Or, well: I had to share with the cat a little. No biggie.
Posted by Allan MacInnis at 5:25 AM