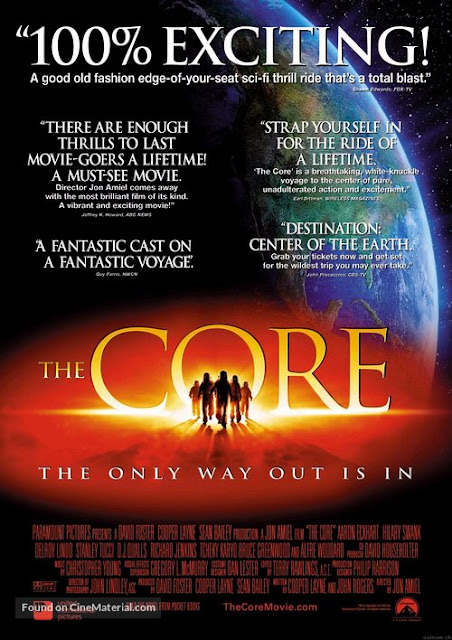 I have written about the shot-in-Vancouver 2003 film The Core before, but it is on Netflix Canada now, and Erika and I just re-watched it... so I must write about it again, especially for followers of locally shot cinema (Robert Dayton, this one is for you - and also for Stephen Hamm, since there's some interesting electronic soundtrack stuff, courtesy Christopher Young, who kind of goes for a punchy Tangerine Dream thing at times). It is very, very entertaining. It is not a great movie, and it is not quite a so-bad-its-good movie, because it realizes key aspects of its premise are beyond ludicrous, and this knowingness interferes with it being truly bad, since (I think) for a film to be truly bad, it must have delusions about itself. The Neptune Factor, which it resembles in some elements, is truly bad (also not so-bad-its-good, exactly, though its sheer badness makes for the best parts of it). It fails to recognize its own absurdity, and plays it straight. The Core - similar to the recent Rock movie Rampage - does not have this problem. Any film that includes lines like, "As long as we can surf these magma flows, we'll be okay" has too much of a sense of humour about what it is doing to really belong with the likes of Tommy Wiseau and Battlefield Earth - tho' at the same time, the film is not trying to be bad, either. It's just trying to have fun with its ludicrous premise, and tell an entertaining, suspenseful, Hollywood-action-movie story to boot - fun that is enhanced for people from around here by the very much undisguised Vancouver locations that allow the film to leap from Boston to Chicago - for its first and second scenes - in the course what you can't help noticing is about a fifteen minute walk, the locations used being mere blocks from each other.

Made before Michael Bay and Roland Emmerich had cornered the market on big-budget, giant-spectacle global disaster films, back when the Rock was still a wrestler, in the days when pretty much every science fiction film about the end of the world involved giant meteors, and global warming was barely in the news, The Core presents the loopiest possible premise for its popcorn-slinging apocalyptic spectacle: the molten outer core of the earth has stopped spinning, and a group of intrepid terranauts consisting of Aaron Eckhart, Hilary Swank, Delroy Lindo, Stanley Tucci, Tchéky Karyo and homeboy Bruce Greenwood drill into the planet in a giant vibrator on a literal journey to the centre of the earth. They bicker and argue and sacrifice themselves one by one. Heroes emerge. Emotions are roused. They crew find themselves briefly trapped in a ginormous geode. There are "diamonds the size of Long Island." Whales become an important part of the tale (though alas, Netflix subtitles the sounds of their singing as "whales whining."). Mission control on the surface of the earth - led by Richard Jenkins and Alfre Woodard, with DJ Qualls as a hacker named Rat - loses faith and tries to pull the plug. Will our heroes survive? Will they complete their mission? Which of them will be required to sacrifice themselves? And most importantly, WILL THERE BE DINOSAURS?


Spoiler: there are no dinosaurs, not even fossil ones. No giant fish, either, you Neptune Factor fans. But the science is ridiculous enough that you wouldn't have been entirely be surprised should such things have popped up, and having to settle for mega-geodes, magma, and Long Island-sized diamonds is a smidgen disappointing.

But things blow up! A lightning storm destroys Rome! There is a scene involving birds gone wild that is likely the most intense bird-horror scene since Hitchcock! And fans of filmmaker, actor and professor Tom Scholte should note: he has one of his bigger roles in a major Hollywood production. It's not like he's in a Bruce Sweeney movie, here, but it's still fun to see him on screen. (Local Rekha Sharma is in it, too, though I confess  to not knowing her other work). I kind of loved watching The Core again, and Erika liked it too; if you have Netflix, check it out.

Do bear in mind that I didn't say it was actually good. But it sure is fun!
Posted by Allan MacInnis at 12:41 AM