So it is about midnight, and Tybalt and I are inside, having a night to ourselves. The Hunt is on the TV, and he's diving his time sitting beside me, receiving a petting, and exploring the apartment, visiting the stations of his "indoor cat" cross: the water bowl, the litter box, the food dish, the bamboo. (He likes to go panda on our bamboo). I am also a bit distracted, pausing the film to write a bit. At one point, as I sit in my office chair, he meows at the door to the hall outside. "Do you want to go out, buddy?" He rarely does, but sometimes - I think when he smells another cat out there - he makes a request.

I walk over to the door and open it. He runs away almost as soon as the door is open. Curiosity will not kill this cat, he seems to say, staring at me. "You sure? Okay." I close the door.


A few minutes later, I have gone back to my computer to write, and he meows again at the door. I go over and open it once again. He approaches it, and then turns and runs away, deeper into the living room, looking back at me. "Do you want to go outside, buddy? Go check out the hall?"

I step outside and wave him towards me, door wide open. He just stares. I have stared at him through the door before. 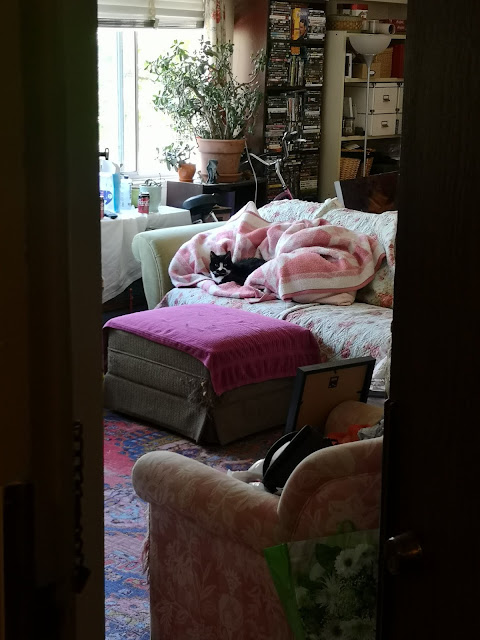 I step back in, shut the door and go on about my business, when a few minutes later, I hear the cat meow again. He is looking at the door, standing beside it. I open it for him. This time he runs outside, quickly scratches the carpet to mark his territory, then runs back inside. Which is usually all he does, especially since that time when he darted out as Erika was coming home, and we didn't notice it, and the door closed on him. He was locked outside for about ten minutes until a neighbour knocked. His trips into the hall have been few and far between that.

He is done with his scratching, but I still stand there, door open. I step outside and look back at him. "Don't just mark your territory, cat - come on out and explore a little! It's okay..."

He stands watching me from the kitchen, mistrustful.

Erika disapproves of my encouraging his curiosity about the hall outside, a little, but I for one would like him to come outside into the hall tonight, for a change. He almost never does. He's the sort of fragile fella who still hides, after over ten years of being with Erika, and five of being with the two of us, when we vacuum; it's so tragic that we generally just let the carpet dust up, so we don't have to watch him sprint for the safety of the underside of furniture.

But I remember how, after we got back from our last big trip, when Erika and i put him in his carrier and took him to her parents, he was much more alert when he got back - and calmer, too. I think the new experience freshened him up a bit, and made him braver, to boot; he's less inclined to flee from a crinkled plastic bag, for example, or run away if we put some blanket on him. He will even play with cat toys that previously scared him, like the mouse-on-a-string. The vacuum is still traumatizing, and if I start loading laundry into the big blue Ikea bags he does a runner, but he's a stronger cat for the odd adventure, I think, and I feel like providing him a new one tonight.

It's gotta be good for him. Surely one of the reasons old people decay cognitively is the lack of new inputs. You need to get out of the house once in awhile - the same routine, day in and day out, dulls the brain. Maybe cats, even indoor cats, are like that, too. He's getting older, and Erika occasionally describes him as having "senior moments." Perhaps a trip into the hallway now and then is the answer? 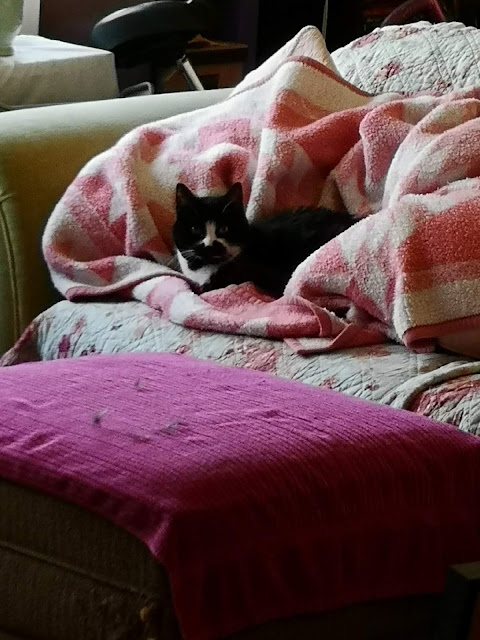 Eventually, as I stand there in the doorway going "here, kitty!" he comes out into the hallway. I let the door close behind us.

Immediately, he spins around and starts scratching at the door to be let back in. I try to lure him further out, but he continues to scratch. After a couple of minutes, I open the door. He rushes back in, far into the living room, then turns to watch.

I'm not done. I get a cat treat to help lure him back outside. He comes out for the treat - but he doesn't go much past the door, once again. I walk down the hall, and drop another treat on the floor several yards away, to see if he will come to it. He stays where he is, and looks for the treat near the door.
I pick it up and drop it again and point at it. He continues to look around the floor where he is.
"No, it's not over there, buddy." I pick it up, drop it and point at it again. Eventually he comes down the hall, takes the treat, and runs back to the door.

Variants on this happen one or two more times. At one point, a neighbour comes down the stairs chasing her own cat. Many of the cat owners here let their cats out now and then - but this one - a small female calico - has escaped without permission. Our neighbour treks down the hall in her pink bathrobe and slippers, observing Tybalt and I, narrating her kitty's jailbreak, and then scoops up her own cat. "There you are. Come here!" She goes back up the stairs, saying goodnight to us as she passes. Her cat briefly meows, and Tybalt hears it, but that one item on the wishlist, that Tybalt will get to hang out with other cats, has yet to materialize.

One time I opened the door for him, at his request, to find another cat - perhaps this same small calico - peering in curiously. The two of them were nose-to-nose for a minute, then Tybalt swatted her face, abruptly ending the visit. It's his only interaction with another cat since we've had him.

Eventually, as the night goes on, I figure out that maybe Tybalt will be less inclined to run back to the door if I prop it open, so he knows he can get back in. I put one of Erika's shoes in the door and leave it there. He makes one trip out, and comes back. He meows at me, standing at the door, which I have shut behind him. I open it again and decide that to really foster his independence, I should just let him do his thing for awhile - to go explore the hallway or not, his call. It's not like he can get into trouble. I leave the door propped and sit down at my computer. 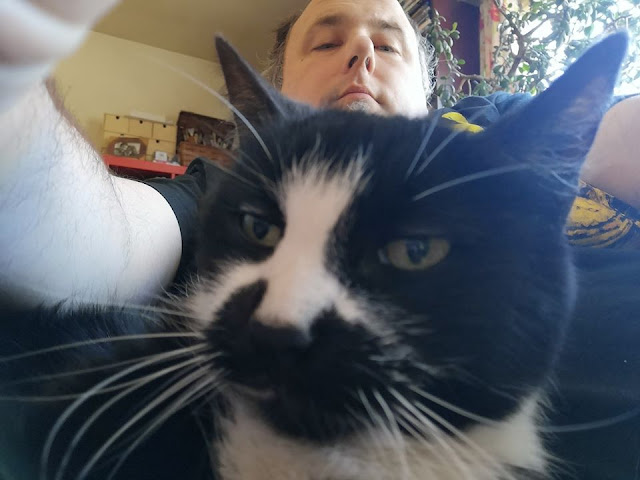 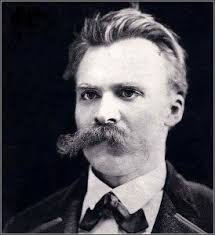 A few minutes pass where I have no idea where the cat is, when I hear Eric, one of our neighbours, in the hall. I recognize his voice as I sit in my office chair, and he's saying something like, "Are you locked out, buddy?"

The door is propped open, so I'm not sure what Eric means. I see Eric is coming down the stairs to talk to me, so I step out, and Eric beckons me up and shows me what's going on: Tybalt has, bravely, gone all the way up one flight of stairs, which he has NEVER DONE BEFORE -

- but he's gotten confused: the apartment door directly above us looks pretty much exactly the same as the one below, and he's scratching at it to be let back in, hunkered down close to the floor.

I mean, what does a cat know about doors and floors? Just because he went upstairs doesn't mean this is not the same door he left behind, right? Maybe the same door is on BOTH FLOORS. In this universe of mysteries, this human world not made for or by cats, why shouldn't it work that way?

Eric, who is ahead of me in the hall (and who knows our cat, from occasional catminding requests), scoops Tybs up and brings him to the stairway, saying "poor guy, did you get confused?" He remarks to me that his cat does this too, sometimes - doesn't know which door he's at. As we turn the top of the stairs, Tybalt spots Erika's shoe, wiggles in Eric's arms to be released, and quickly sprints down the stairs and into the apartment.

Eric and I chat about our cats. I come back in, sit back down at my computer, and the cat comes over for a scratch on the cheek. Then he settles down in his spot on the couch.

I guess that's enough adventure for tonight. Tybalt has stopped meowing me over to the door, so I guess he agrees. Maybe he'll watch the rest of this movie with me?

He seems a bit more alert for his adventures - but maybe that's in my imagination. Poor guy.
Posted by Allan MacInnis at 12:02 PM