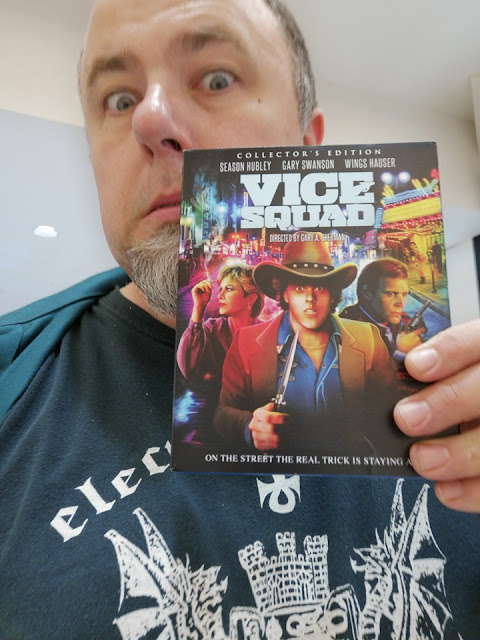 There are a ton of things I still love about Vice Squad - not least of which is Wings Hauser's reading of the theme song, "Neon Slime" - but I must say, the film's long being unavailable on DVD or Blu has maybe done it a disservice, because I had built it up in my mind as a grimy, violent grindhouse masterpiece, and have been slavering for the day it would be made available again (I last had the chance to buy it at the Virgin Megastore, which tells you how long it's been). It's still fun (and grimy and violent): there's plenty of eye-opening sleaze, some great set pieces, the old guy who wants to suck Princess' toes is pretty charming, and the wallpaper in Ramrod's apartment is damned impressive. Plus no one can fault Wings Hauser for a lack of commitment as an actor, because he just chews this movie to bits and then uses the splinters to pick his teeth, grinning - it is some of the finest overacting ever to grace the screen - but you know, I enjoyed this a lot more, like, 14 or so years ago, when I saw it as a late night screening at Cinemuerte (or back in the days when my buddies and I, as teenagers, would watch it on VHS). For all its virtues, there are also some corny and clunky bits, and more than one winceworthy line of cliche'd dialogue. If you've been counting down the days for it to get this nice new Blu release through Shout! Factory, you had best lower your expectations a little, so that you're not disappointed. If you've never seen it before, though, and like sleazy 80's grindhouse fare set in the dark end of Hollywood, rush to grab it today...

The blu looks great, by the way. Watched it this very night, the night of its release. Tons of extras - including a contemporary peek at its locations - and reversible art with the original poster. Glad it's out, in any case!
Posted by Allan MacInnis at 11:49 PM