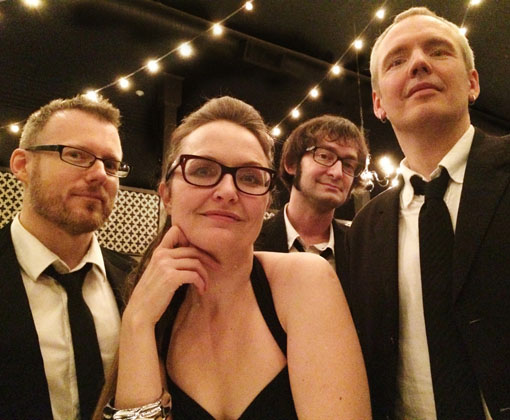 Cass King & the Next Right Thing was a great band name. It had a pleasant rhyme to it, and an appealing logic, that maybe you don’t need to know what the ultimate destination is, as long as you keep doing the next right thing.

Alas, King and her bandmates – including her partner, guitarist John Woods, who is also King’s counterpoint in the sex-themed comedic musical duo the Wet Spots  – felt that, though they also loved the old name, they had to change it.

“People kept getting it wrong, in bad ways,” King explains, as part of an email exchange earlier this week. “Like, ‘The Next Best Thing’. Not the kind of thing you want to see on a marquee!”

Indeed! All hail, then, the new band name, arrived at with some consultation on social media: Cass King & the Cassettes – which, namewise, is pretty much just as fun, and who, musically, offer the same mix of inspired, sometimes even punky covers and soulful originals. 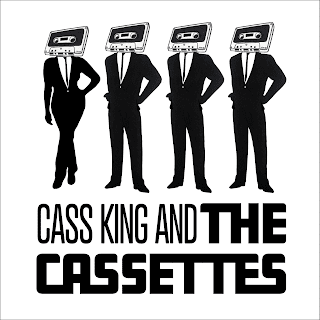 In case you haven't caught her band before, to give you some idea what to expect from seeing her live, King – who also sings in four -woman acapella soul group called 'What It Is!" – lists Mavis Staples, Janis Joplin, Tina Turner, Aretha Franklin and Prince as big influences; you can catch her doing a sultry rendition of Nina Simone’s “Do I Move You” on Youtube.

And you’ve really missed something if you haven’t seen Cass King belting out Joe Jackson’s assault on consumerism, “I’m the Man.” (That's a link to Jackson doing it live, not King). It’s a fantastic song, and her band, also including Brendan Mooney on bass and Adrian Buckley on drums, rip through it with ferocity. Best of all, it involves a pleasant incongruity, seeing a woman singing a song from such a determinedly male point of view, where the chorus, again and again, is “I’m the man.”

“‘I'm the Man’ is still one of our favourite songs to play,” King enthuses. “Joe Jackson is such a beast of a songwriter, he has a way of capturing a character in just a few words.”

She illustrates with a snippet from “Is She Really Going Out With Him,” off Jackson’s 1979 debut Look Sharp!: "’Pretty women out walking with gorillas down my street / From my window I'm staring as my coffee goes cold’...John and I have such admiration for him. He's like a little punk who went to music school; he makes such interesting musical choices but maintains that critical edge. We're kinda like that, except none of us went to music school.”

“I’m the Man” also relates to one of the Cassettes’ new originals, which you can preview a snippet of on the band’s website: “Nice Guy.” This one amps up the Motown elements of King’s vocal delivery, and musically, is a bit more typical of the Cassettes’ style than the ferocious punkiness of the Joe Jackson tune. But as King notes, it has some things in common with the Jackson song; lyrically, “they are both character songs, where the singer is taking on a character not necessarily their own.”

You only get a tease of it from the sample, but it’s about “a phenomenon that the internet has dubbed the ‘Nice Guy’ (see r/niceguys). A ‘Nice Guy’ is a guy whose interest in being a nice guy ends when he is denied the attentions of a woman to whom he feels entitled.”

“Nice Guys” shows you how much intelligence is at work behind King’s music. As she puts it, “It’s one of those songs that seems simple but doesn't really follow the form you think it's going to follow.” On the other hand, “it's got those ‘gimme a hey / gimme a ho’ good old 70's call and response vibes.” You can dance and think at the same time, without having to cringe at lyrics that hint at awful, creepy attitudes.


“So many of the songs that we love just don't stand up lyrically in the 21st century,” King observes. “For example, the song I just referenced, Joe Jackson's 'Is She Really Going Out With Him’, epitomizes a kind of surly male entitlement that's unsettling, if not downright creepy… We wrote a song that calls that phenomenon out by representing it in a bratty, sinister way.” 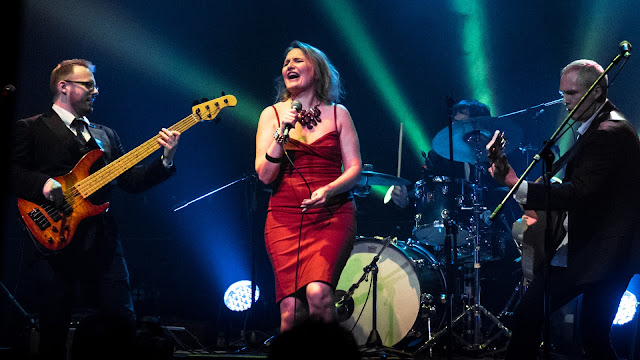 Cass King and the Next Right Thing by Sharon Steele

All of which brings us round to a discussion of gender politics and feminism. King is honoured to have recently performed at the 16th Annual Dyke March and Festival, and often posts on Facebook in support of the LGBTQ2S+ community. “I love the politics of the Dyke march,” she says. “Our band appears pretty hetero, but we are at least 75% queer.”

So what does she make of the small but vehement portion of society – lately focused, in Vancouver, on SOGI 1 2 3 – which seems hell bent on denying queer and trans people an equal place in society?

“Okay, bear with me on this one,” she replies. “Gender is part of the big package labeled 'Identity' to which we cling. When we allow ourselves to transcend rigid ideas around such an important aspect of our 'personality', we come face to face with the great unknowability of all things. We are not our 'identity', our 'personalities' change, the whole shebang can change in an instant and we have to come to terms with the essential groundlessness of all things. People by and large hate this. We want to believe in our stories. The enfranchisement and visibility of trans folks just absolutely shakes some people to the core. These folks just can't hang with trans rights because it makes them question their own reality, and they hate that. And that's fine as long as they don't infringe on trans rights to exist. And frankly they are used to doing that as a matter of course, so asserting trans rights will feel like an aggression. It's like taking the stick away from the three year old who shouldn't have been hitting his sister with it in the first place.”

King is anything but preachy in concert, but she does touch on these topics in her songwriting. “I think the job of an artist is to connect,” she offers. “If that singer is connecting with their audience, all the power to them. Our lyrics are overtly feminist but we tend towards a character representation instead of calling the behaviour out overtly. For example, we have a song written from the point of view of the 'Thing in the Room' that nobody wants to talk about, and one in the works about queer kids who are rejected by their families and have to find a home somewhere else, with people who love them.” 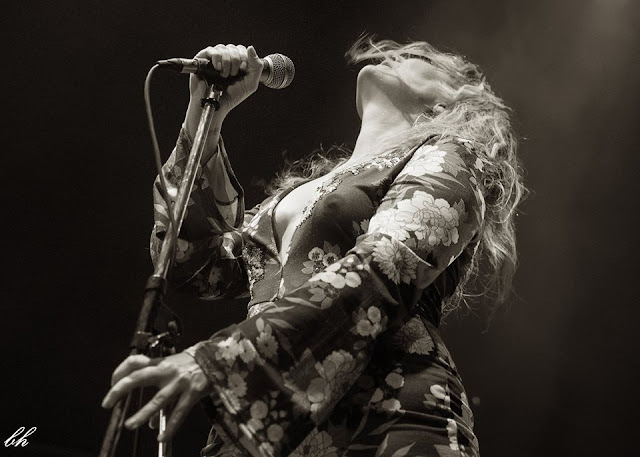 As a regular performer at Vancouver Bowie Balls, King was around when feminists of a different stripe tried on social media to shut down the burlesque portion of one show; but that’s not really where she’s coming from, she writes: “I love burlesque. It's very proletariat, inclusive, and body positive.  My feminism includes sex workers and trans folks!” (King’s other projects include occasionally serving as a guest singer with the Kitty Nights Hot & Heavy band, sometimes accompanying burlesque performances; we’re not sure if she’s involved in this clip,  but it gives you a pretty good idea just how fun burlesque can be.) “I think if the artist says that they feel empowered by the art, who are we to impose our moral reservations? In burlesque especially, we can't even loftily propose that they are trapped by all the money they are making. This is community theatre, man. Let's not forget that the female body has a female mind and a female will attached to it, and as such is entitled to female freedom of agency.”

So what songs has she done at the Bowie Balls? “I wheedled my way in to the first one as part of Orchard Pinkish's band, thanks to the wonderful Tony Lee,” where King, with an all-star band, led rousing versions of “Fame” and “Heroes,” if memory serves. She describes that first show – which she notes took place only a few weeks after Bowie had died – as being like “a collective howl of grief from our musical community and the audience. That year, Space Junk performed ‘Blackstar,’ which was so fresh for all of us. We were united in our love and our pain, in tribute to a great artist. I think that show retains its magic because it's not just a tribute night, it's something deeper.”

Since then, King and her band have covered “Changes,” “I’m Afraid of Americans,” “Wild is the Wind,” “Rebel Rebel,” and many others at each Bowie Ball that’s taken place. She recently posted the Cassettes’ reading of “Under Pressure” on Youtube, featuring a host of local guests.

For King - besides the above other "real standout Bowie Ball moments were Preston and Fletcher singing 'Life on Mars.' accompanying themselves on a single piano, and Rebel Priest singing 'Under Pressure' with Bloody Betty Bathory."

Returning to the band’s own original songs, how are they written?

“If you ask John, he will say that he writes a great track and then I come in and shit all over it, and then we write the hook. We both love harmony. John has a real rock and pop groove, coupled with a love of clever lyrics. I have a funk and R&B groove, with a sense for hooks, rhythm, and raw emotion. So there's some tension there, always, but we trust each other.”

King is particularly proud, she tells me, "of our song 'Beautiful Today'. It's a song about being in a relationship that's perpetually ending, and how beautiful it can be in the moment. It was one of those songs that just floated up out of the piano. (I don't play the piano, so you know this one really wanted to be born!) At this point we didn't even really have a band. But I brought it to John and to our friend Scott Fletcher, and it made both those monster songwriters kinda verklempt, so I knew I had to pursue it.:

That song, presumably, will be on their new album coming out in October, called Naked on the Dance Floor – a title apparently based on a true story! Meantime, people who haven’t caught her can see her at the Fairview, August 10th, where the Cassettes share a bill with B52s cover band Rawk Lobster.

Any other final observations about her music?

“It's very liberating to start a rock band in your forties,” King answers. “I recommend it.” 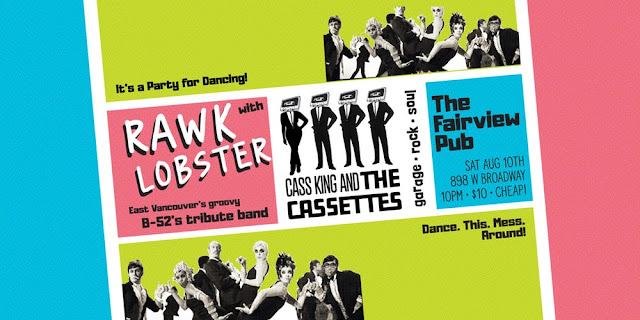 Posted by Allan MacInnis at 7:47 PM