Yesterday was Max von Sydow's 90th birthday! (Thanks to Aaron Chapman for pointing it out on FB). I love Max. From the wounded recluse who gets sucked back into dealing with people in Bergman's A Passion (wrongly titled here as The Passion of Anna) to the cultured, quiet hitman in The Three Days of the Condor to the mute renter in Extremely Loud and Incredibly Close, I've always delighted in his characterizations and always loved his voice, even when he's acted in shamelessly bad stuff (would I have watched Flash Gordon twice if not for Max as Ming the Merciless? Hell, no! And I sometimes watch The Exorcist just up to the confrontation in the desert between Merrin and the statue of Pazuzu, then turn it off). Since I just posted my remembrances of Seymour Cassel below, let me use a post here to celebrate someone who has not yet died. I'm really glad Max von Sydow is still with us! And still working! I mean, I don't follow the recent Star Wars films and I don't do Game of Thrones - but I hope his recent roles are not boring for him; I know he does get bored of playing within the same range, which may explain some of his more outlandish acting choices... 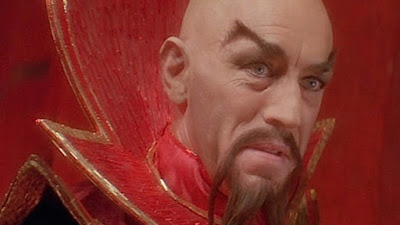 Two of my favourite, under-rated Max von Sydow performances, if anyone is looking for a way of celebrating his birthday, are Dreamscape and Death Watch. The former is a rather batty, high concept SF film in which a young, irresponsible psychic (Dennis Quaid) is trained by a slightly ethically compromised doctor (von Sydow, alas well within that aforementioned range, but embodying the character perfectly) to enter the dreams of people with traumas, to try to help them resolve them; Christopher Plummer - von Sydow's Oscar rival from a few years back - is the heavy and  his (also psychic) thug is played by David Patrick Kelly ("Warriors... come out to play-ayyy"). There's a lot more, including an American president who is terrified of nuclear war, and a stop motion snake man! (Not a man who handles snakes, but a snake-human hybrid. What's not to love about a snake-human hybrid?). It's actually a pretty good 1980's SF thriller, if a little cheesy at times (the love scenes in particular seem to come out of the fantasy life of a 14 year old boy).

The other relatively unheralded von Sydow film is Bertrand Tavernier's Death Watch - also ostensibly an SF film, shot in Wales in the 1980's. It tells a story of an ill woman (Romy Schneider) on the run from what we would now call a reality TV show, aired by a station run by an amoral cynic (Harry Dean Stanton); she wants nothing to do with the show, but doesn't realize her fellow fugitive travelling companion (Harvey Keitel) is actually a plant foro the station, surreptitiously filming her, using cameras he has had implanted in his eyes. Max plays her ex-husband, and has a couple of great stories at the end of the film (again, acting well within his range, but, I mean, go watch Flash Gordon if you want a departure). It's slightly aged as SF - you'll guffaw at a couple of its clunky, dated visions of the future, like "computerbooks," which are an attempt to imagine how technology will infiltrate our lives - but if you get involved with the human aspects of the story, it's really quite moving. I mean, there are other, more esteemed von Sydow performances, but those two are in films I figure at least some of my readers haven't seen, that are pretty pleasing films to discover (I used to recommend Death Watch, in the old, truncated VHS version, to all my customers at Rogers Video in Maple Ridge, and they all liked it).

Horror movie fans who haven't checked out The Virgin Spring are also urged to do so. It isn't as brutal as the film it inspired (The Last House on the Left) but it's the Bergman film I think most genre fans will appreciate (and has Max's only nude scene that I'm aware of - not that, I'm like, "gay" for Max or anything). Plus he wrestles a tree!

Posted by Allan MacInnis at 5:23 AM

If people are wondering - even tho' I do count myself as a William Friedkin fan - I actually do think The Exorcist is a kind of bad film, as I imply above. I mean, Linda Blair stabbing her cunt with a crucifix and blathering on about being fucked by Jesus is just a *tad* over the top, innit? Given a choice, I'll actually watch The Exorcist II, the next time I go that route - also with a lot of Max, plus even less believable "80's SF" futuristic technology than Dreamscape or Death Watch, plus a sympathetic role for Louise Fletcher - basically the same role she played in the Maxless Brainstorm, come to think of it - plus James Earl Jones, voodoo, locust rides, and more! It's hard to go wrong there, even if it IS batty. I won't go so far to say that it's the better film than The Exorcist, which I believe Pauline Kael was bold enough to assert - it's just vastly more fun! After Zardoz, it's John Boorman's most ridiculous movie, so fans of Zardoz should check it out...

Coincidently, this month The MOVIES TV network is running "3 Days of the Condor." So, I Googled '... differences between book and movie' and your blog came up. Then I hit the HOME button and saw the birthday greetings to M.V.S. Ironically, much like the movie it seems that everything is connected in some bizarre way.
As for "The Exorcist" one must consider it in the context of it's time. It was very scary when I was a teenager in the 70's. Of course, this was before horror movies became the wall to wall gore fests that they are today. Plus, they were limited by having only practical special effects; no C.G.I.
M.B.