The Vancity Theatre - home of the VIFF year round - is still the best theatre in Vancouver, and this week, if (like me) you have time off work and the energy to commute and a passion for cinema that you've been neglecting, it's a real treat to go sit in their incredibly comfortable chairs and experience films on the big screen - because I don't care how large your flatscreen is, folks: their screen is bigger, and their sound system better, and there's a good chance their chairs are more comfortable than the ones in your home, to boot (they're still the best seats I've sat in in any movie theatre, ever, though Landmark's recliners are giving them a little competition of late; they're just a smidgen too ergonomically awkward to quite take the prize, though). As 2018 winds down, the Vancity is doing a Best of 2018 series, appropriately enough, and though I have seen only a couple of the films in it, there look to be some amazing choices indeed. 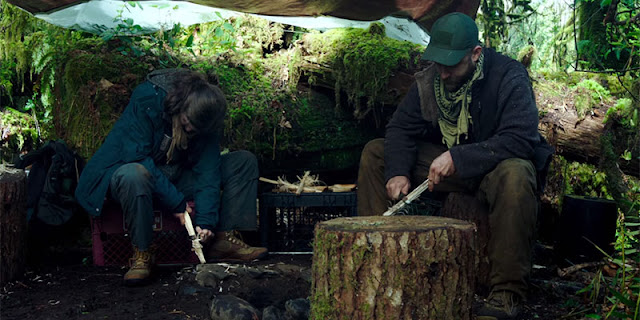 Case in point: I just caught Leave No Trace - a quiet, positively Reichardt-ian Pacific Northwest mood piece about a father and daughter living off the grid in Oregon. It's painful and beautiful and very gripping; I'm sad to report that has done its run, but it's a great film if you get a chance to see it, one I thought, with no reservations, was powerfully moral, deeply touching, and exquisitely crafted, in that quiet, intense, Reichardt-ian way (it would work very well on a double bill with Night Moves, though it tells quite a different, and ultimately less upsetting, story). I haven't seen a lot of really great new films lately, or even really good ones, and certainly very few that speak to me, in my alienation and disillusion, as powerfully as did this one. It's the kind of movie the Unabomber might enjoy (but has no bombs in it, so fear not. I'm not even sure, thinking back, that there's profanity...). 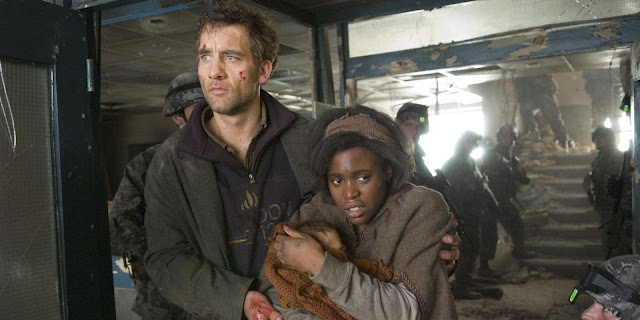 Also, with thanks to Danny Nowak, tonight I got to revisit Alfonso Cuaron's stunning Children of Men, which I believe is still playing a few more times. It's a film that Danny got me to reconsider some years ago, and I'm ever in his debt: When I first saw it, in 2006, I was in a fairly political place, outraged about the wars in Afghanistan and Iraq and the war on terror in general, doing lessons in my ESL classes about Guantanamo Bay and torture, playing them Phil Ochs' "Cops of the World" and clips from The Battle of Algiers. I have calmed down a little, since then, and had the softening spoonful of sugar of the Obama regime to soothe and butter me up for the outrages, offenses, and absurdities of Trump. You'd think that in my mood of rage and anguish over the state of the world in 2006 I would have been totally receptive to a film as grim and "prophetic" as Children of Men, but I wasn't: it was - along with Brian DePalma's Redacted - like pouring salt on an open wound, for me,  back then, and made me upset and angry in bad ways, ways antithetical to being able to appreciate it as a film. I mean, I was already seething, so much so that I couldn't take in its more hopeful aspects (it is, after all, basically a Christ story). It was only at Danny's insistence that I revisited it a few years ago, and I've seen it twice since, counting tonight, again thanks to Danny; it's a masterpiece of cinema, maybe one of the greatest films of the 21st Century - which seems to have produced very few truly great films, or at least great films that I've seen - and it benefits nowadays from not being quite as troublingly timely as it was in 2006 (or maybe we're all just that much more numb?). If you haven't seen it lately, you should (and it looked great onscreen tonight, and hey, Peter Mullan plays Syd! I don't think I knew who Peter Mullan was when first I saw it).

There's also Roma - which I'll let you read about on the Vancity website. It's Cuaron's newest film, and is also being hailed as a masterpiece; I know pretty much nothing about it, and want to keep it that way until I can see it (those of you unable or unwilling to make the pilgrimage should note that it is on Netflix, but like I say, the Vancity screen is bigger and their sound system is better and hey, other people will be there, maybe even some friends!).

There are some films I'm less excited about, even of the ones I've seen. To be honest, I wasn't actually a big fan of Panos Cosmatos' Mandy, though I will consider giving it a second chance tomorrow night. I realize that most young movie geeks are in love with it, and even a few older ones. My thought on it, on my first and only viewing thus far, is that if you're going to make a movie in which you make it obvious in pretty much every image that you intend it as a trip, best seen with your doors of perception not just cleansed but blown off their fucking hinges, why would you also have someone burned alive, at some length, inside a sleeping bag in that film? Isn't that, umm, kind of the stuff of bad trips? It's not the stuff of good trips, that I can see. Maybe I'm missing the point, but - much as I loved Beyond the Black Rainbow and am happy Panos has gone "bigtime" and all, Mandy seemed like a pretty trivial, maybe even slightly kinda offensive, film: if someone had at any point said to me, "wouldn't it be great to make a super violent movie for acidheads starring Nicholas Cage? We could have him do all this crazy hardcore stuff, like chop of someone's flaming head and then light a cigarette off it, but with trippy visuals all over the place and references to Manson-style acid cults and so forth! ...Wouldn't that just be AWESOME" .... in all honesty, if someone had put that question to me, I would have looked at them oddly and said, "no, no it would not be AWESOME to do that; it would be childish and a waste of cinema and bad advertising for psychedelics, and it would pander, for no loftier purpose, to the worst aspects of its audience, who do not need these aspects pandered to. Leave that shit to Tarantino and grow the fuck up."

I mean, sorry Panos, but as far as I could see (on first viewing only, again), Jim van Bebber's Manson  movie had higher moral ambitions than Mandy, and was less objectionable, and that film was pretty repugnant at times, too. Or maybe it is time to re-watch Reg Harkema's Leslie My Name is Evil?

...But fuck me, right? All you ironists and belly-laughers who roll around in cinematic cesspools like it's a playground of excess and debauchery, for whom watching Salo is nothing more than a badge of how hardcore you are - who watch that poor girl being forced to eat shit and laugh at it, instead of weeping for her - you should DEFINITELY get to see Mandy theatrically at least once, right? And there are a lot more of you then there are of me! Ya fucks.

I reserve the right to take all the above back and proclaim Mandy a masterpiece when I see it again (possibly tomorrow - fans of it can come and beat me up, if you like; I'm sure it will improve my opinion of it).

I'm much more curious about Paul Schrader's First Reformed, actually. I used to really like Paul Schrader, but haven't had a positive cinematic experience associated with him in a long time, unless it involved revisiting one of his classics (someone remind me that I want to see his Patty Hearst movie again, okay?). I have grown somewhat cynical about his limitations, in fact, after seeing him steal the same scene from Bresson's Pickpocket for THREE SEPARATE MOVIES (American Gigolo, Light Sleeper, and, unless my memory fails, The Walker). I'm willing to lay odds that he pays that particular "homage" in this one, too, but for old time's sake, I'm inclined to give him a chance. People ARE saying this is a great film, and I do like Ethan Hawke (and so does my wife!). 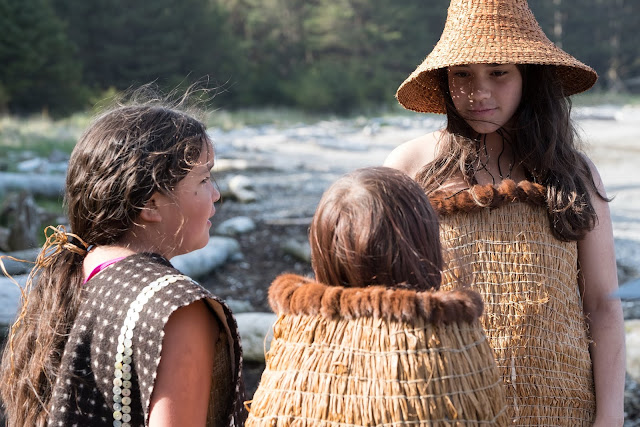 There's lots else, from Japanese anime to a Hadai Gwaii film shot in two Haida dialects to a comedy about the death of Stalin. There's also some pretty interesting-sounding film fare screening that is NOT part of the Best of 2018 series, like a documentary that features Judi Dench, Joan Plowright, Maggie Smith and Eileen Atkins talking about their acting careers, called Nothing Like a Dame. Or maybe you'd rather see Paddington 2 (which for some reason has no hyperlink available). I have no experience of Paddington in any form or media, but my wife has said I dress like him at times, so I guess I'm positively disposed. Actually, Judith Beeman, mentioned in my previous post on Bird Box, was saying that Paddington 2 is pretty great, as a matter of fact. I don't know that I have the time or need for that - it seems a bit of an investment to go THAT far out of my way for a Paddington experience, no matter what Judith says - but, well, maybe that one I will check out on Netflix someday, or something. 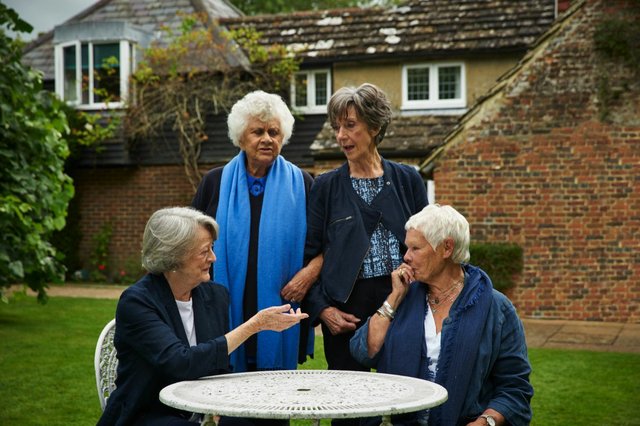 Anyhow, the great thing about cinema (or music, for that matter) is that there really are very few wrong answers; everyone craves something different, from romps in the trash to the minimal and refined, there's something for everyone at the table. And it's quite the table set at the Vancity over the next while, also including Orson Welles, an upcoming Italian festival, and... well, I can leave you in their hands for more.

Thanks to the Vancity Theatre for putting on such stellar programming (even Mandy - I really might use tomorrow to give it a second chance. Who is with me?).

Actually, it will be interesting to see how an audience reacts to that film. Hmm...
Posted by Allan MacInnis at 2:27 AM