Have an Alienated Christmas!

I'll be out of touch for a bit... irons in the fire, and holiday stuff to do. But there is some fun stuff I'm hoping to get to while off work, where, by the current plan, I will have the Apartment! To! Myself! for a few days (unless you count the cat). So even as I try to wrap presents and make sure I have my rent paid for January, I'm thinking on things I want to write.

For instance, I discovered that John Werner of the Furies is going over to England to reunite with members of the Pack, who would later morph into Theatre of Hate. It's a jarring thing, to discover a guy you know from the local scene co-wrote one of your favourite British punk songs. I knew some members of the Furies and the Shades (also fronted by Chris Arnett) went over to England; Jim Walker, playing drums on "New Clientele" I believe, ended up on PiL's first album - but I either spaced on, or never knew about, the Pack connection (which also involved Walker for awhile, and Werner's brother Simon, known for his time in the Skulls, sort of a prototype version of DOA). Hoping I'll be able to get to that story soonish.

Also, I'm in the process of reaching out to a noted US punk figure, coming to Vancouver this spring, but I should leave off mention of who, for now, since that one might actually see print. And I want to do a Bev Davies project, too (who found previously unseen photos of that noted US punk figure, taken at the Buddha in 1982 and forgotten until I asked, apparently!).

Meantime, it's Christmas and presents and family and, at the moment, a shitload of holiday cleanup that I gotta get back to. I will leave you with this, in case you're wondering how to celebrate M-Mas this year. (David is also doing stuff sort of "fast and loose" this weekend but I don't know where or with whom. Maybe he'll be busking in front of the Railway Club for a bit? He's done that). 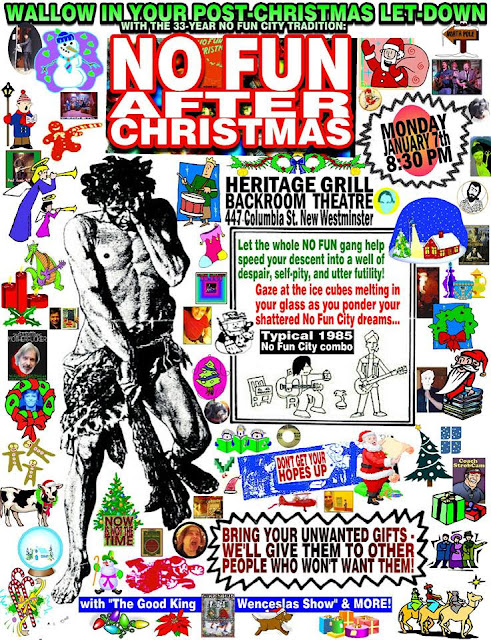