The under-appreciated behind-the-scenes travails of Mike Usinger, plus Kitty & The Rooster TONIGHT! 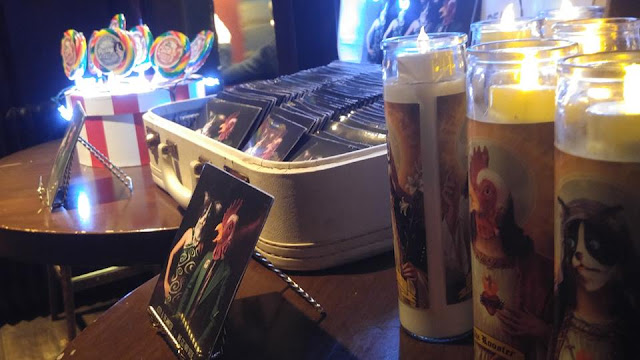 (Taken after this post was written, at the Kitty and the Rooster album release, photo by me)

I have known people who live to bash Mike Usinger, Music Editor of the Georgia Straight, but as a Vancouver writer and longtime (if less frequent these days) contributor to the Straight, I gotta say, Mike is pretty great at what he does. People who complain about him should give it up (or think more deeply, because it seems they often are taking the bait he offers at face value, more on which below). He's kept an ever-dwindling section interesting, he's fought more than once to get me in print and paid, and he's even caught some errors in my writing (and, well, introduced one or two, too, over the years - let me just say in this regard: Emperor!). He's funny, he's hard-working, he looks a little like Lux Interior, and he's made some great calls over the years, to support some phenomenal Vancouver bands. No Mike, no Little Guitar Army cover story, for example. Y'all remember that?

Yes, he writes some tastelessly provocative stuff sometimes. I'm kinda pleased to see that he's shifted from his past "ScarJo nudes! Whee!" persona to the #MeToo-endorsing, Ghomeshi-bashin' Mike of present, but I have never actually minded his more, um, "provocative" writing. I kinda think of him like Tesco Vee - he enjoys provoking people, he doesn't mind being the "bad guy," and he has a somewhat perverse sense of humour. He's the kind of guy that will put a Kick Me sign on his own back and go out in public (especially if and when he thinks stirring things up is good for the paper). It takes some balls to do that, and I've come to appreciate his daring (while not holding him too much to count for the things he says when in provocateur mode). I even think of his occasional defenses of Nickelback in this light (tho' to be honest I have spent so little time listening to Nickelback that I have pretty much no feelings about the band. They may be fashionable to bash, but not having heard them beyond the odd song on the radio - which I almost never listen to, anyhow - I'm not gonna join the dogpile).

Anyhow, Mike had to do some scrambling this week, it seems. I unwittingly caused some trouble. You might notice if you read my Kitty & the Rooster piece that the first paragraph that presently is running no longer mentions a certain popular, free Vancouver summer music festival by name, nor does it mention the toy store chain that sponsored the kids' stage there. If you were very attentive, perhaps you saw the names in my original piece - they were there.

I am sure, like me, Noah Walker of Kitty & The Rooster never considered briefly that any Vancouver festival or kids store involved might be in any way upset by this story. I mean, it's just funny - an innocent mistake that harmed no one - that a band with a name inspired by cocks and pussies ended up playing a kids stage. It's not like they were passing out their piquantly-named lollipops to the kids. Hell, I even forgive the organizers in the story for their mistake - I mean, how many non-kids themed "funny animal mask" bands are there, anyhow? (Next year, maybe they can book GWAR?). Yes, Mike amped things up a bit, as he tends to do, by including a reference to pussy licking in the title of the piece (it wasn't in my original title). But god, folks - it's just sex. Without sex, no babies. Without babies, no kids stage. So big deal... And the joke of their name (and merch) aside, which no kids would see or get anyhow, there's nothing particularly raunchy about Kitty & The Rooster's material (tho' I gather they do cover Al Mader's song about bein' a lousy lay - under the title "Lousy Lover.")

Anyhow, no one anticipated, I don't think, that anyone involved in said festival or chain store would be taken aback by my piece, but someone apparently was.

Did I have to deal with it? Nope.

Did he have to rewrite my first paragraph? Sure looks that way (it reads like his writing, anyhow). He didn't trouble me about it, in any case (maybe he figured I'd be upset - I CAN be a prima donna sometimes, though in this case, I consider the imposed editorial changes kind of value-added).

Anyhow, sorry to the complainer, whoever you are, for upsetting you with this article! It was all in fun. I like your festival. I like toys. I like Kitty & The Rooster (and if I had kids, I would bring them to see the band without thinking twice; they're just smart, funny and playful, which is what I intended the tone of the article to convey). No harm intended, eh?

Sadly, I have a cold and slept like hell, so I PROBABLY won't be at the Anza tonight for the Kitty & The Rooster album release show, but if you haven't checked them out, I think tonight would be a great night to be there. 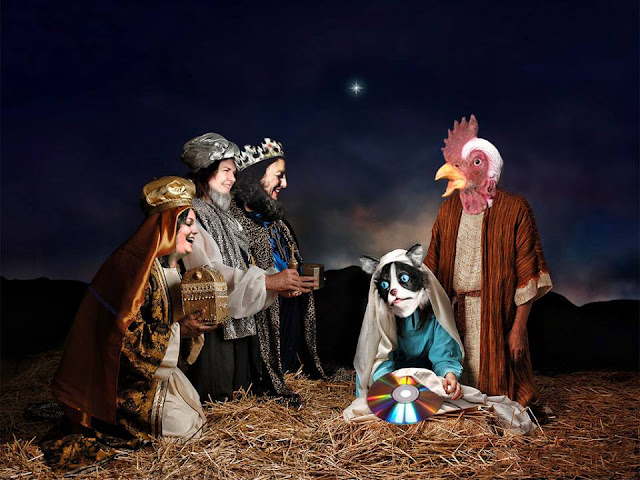 Posted by Allan MacInnis at 6:32 AM

Hey whoo! We gonna go to the show after all!

Here's a second Straight piece that went up today - a "What's In Your Fridge" - which makes no mention of the Khats fest at all (which, if you read it, is still somewhere buried in the body of the original article that I wrote - Mike didn't catch the second reference!).