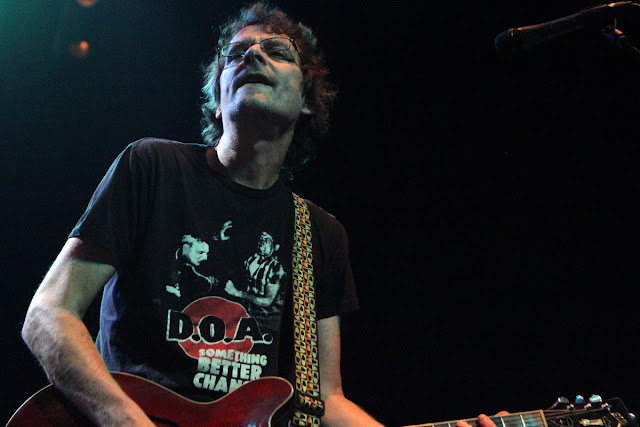 Steve of Mudhoney, and his DOA shirt, by bev davies, not to be reused without permission


I had a big long talk with Steve of Mudhoney the other day (the guy pictured above, thanks to bev davies). May I just say, holy shit that's a cool DOA shirt? I sorta tried to hint to Joe when I interviewed him last that the whole "skeletons with guns" motif didn't really work for me, but it's still the design you're most likely to see on a DOA merch table. I should ask if he's got any of THESE in his garage! (The DOA interview where we had that conversation is not online, but you can read Joe and I talking about the image on the shirt Steve is wearing here). Definitely a conversation-piece T-shirt, though hopefully that's not a conversation with the RCMP we're talking about...

I actually ended up only staying for about half of Mudhoney's set last night, but it's no fault of the band's - they were cooking (and I shot a little video to prove it, though it cuts off part way through "Let It Slide." The audio is probably not so great - these guys played it LOUD.) But I was finding it crazy hot; Erika was fallin' asleep; and the Rickshaw was pleasantly quite packed, which I hadn't expected, and which I was very happy for, but which made it tough for me in my ventures around the room, to say hi to bev and Bob Hanham, to check out bands up close, or to look for Furies' bassist John Werner (from whom I was hoping to get a Furies CD, to pass on to Steve; he had brought one to the venue at my request, but I had no idea when I hatched that plan just how many people I'd be trying to pick him out from. Never did find him, despite circling the inside of the venue five or six times).

Fans of last-minute opening act Waingro should see my interview with Brian (note the hilarious self-portrait he sent, apropos of playing Burgerfest); I always enjoy Brian's solos and absolutely LOVE the album cover for Mt Hood, inspired as it is by the art for ant-consciousness science fiction film Phase IV, which is a film I also love... but their music is a bit on the "trog" side for me, to be honest, and definitely too hard for my wife... The Edmonton-based First Nations trio that followed, nêhiyawak, were a bit easier to sit and listen to, had a very interesting visual component (including abstracted video images of bison and elk and such, with characters from an alphabet I do not know... I am realizing that I have no idea how the transcription of First Nations languages generally works, if each language has its own unique alphabet or if there are language groups that have a consensus alphabet. It sure ain't the IPA, in any case). Musically they did a sort of gothy pop that at times seemed very British, and I was sitting there trying to put a finger on the influences - because I don't know my gothy pop at all, really - and thinking "a bit of the Cure, a bit of the Sisters of Mercy, maybe a bit of Joy Division..." and being irritated that I couldn't pin down a specific secret ingredient that seemed obvious and potent but wasn't the music of any band I paid a lot of attention to.... That's when Erika commented that they sounded like U2. (Beth and Bob were discussing their "U2iness" among themselves when I said hi). They probably have interesting places to go, even if they're music is not quite my thing...

...anyhow, we probably could have stayed longer, but I felt physically uncomfortable, didn't want to leave Erika alone in her seat all night (I did enough of that anyhow with my laps of the venue looking for John) and didn't feel like crowding my way into the packed front of the house. It was nice to finally hear Mudhoney do "Touch Me I'm Sick." I did get up a bit close for that video (I don't know the first song but that's a great bassline), and later on for "By Her Own Hand" - an amazing song. Fun running into Luke Meat, too, who had read and enjoyed my interview with Steve. I genuinely like his band storc, whom I shot video of here... He apparently agrees with me 100% that Mudhoney is way better than Nirvana (tho' who knew that was no longer a contrarian point of view to take?).

Yadda yadda. Not saying much here. Looking forward to the release of Digital Garbage. John Werner, if you're reading this, I'll be in touch - I still want to get that Furies CD off you! (Mudhoney needs to know about the Furies!). Too bad there was no Mudhoney merch last night!
Posted by Allan MacInnis at 8:04 AM