Yesterday actually smelled like woodsmoke around Vancouver. The haze is so thick that it actually seems to be having the effect of cooling things down; it's felt like it might rain for a few days, and maybe put out some of the forest fires around the province, but it is likely just an illusion caused by all the crap in the air. (The news say rain may happen this weekend but I doubt it has much to do with the coolness that comes from being enshrouded by smoke). I gather we have the worst air quality in the world at present - worse than Bangkok, worse than Beijing. Maps of BC show a red province, with so many dots on it from discrete fires. We gather there was even a forest fire in West Vancouver yesterday, hence our being able to smell the trees burning (which I for one had not noticed previously).

I snapped a few photos around sunset last night to illustrate this. The black in a couple of them is our local murder of crows making its way from downtown to its nesting place (rookery, or whatever) on, I think, Burnaby Mountain. They "go to work" each morning, passing my apartment; in the evening they "go back home." 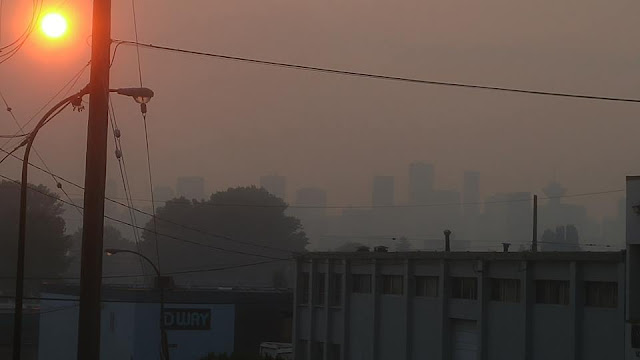 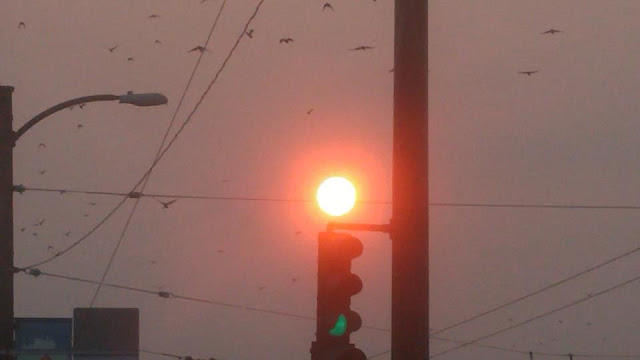 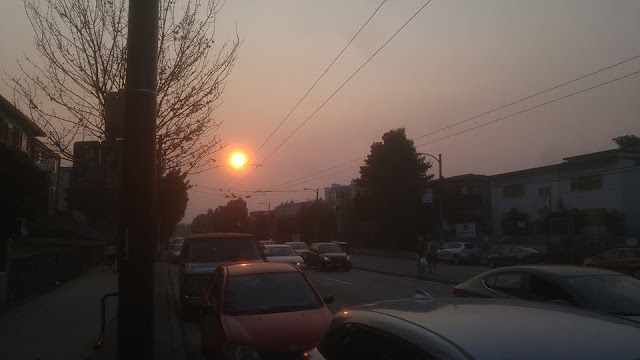 Anyhow, that's what walking around in Vancouver in the evening looks like these days. The new normal, I guess, the last few years running; maybe this is the worst yet? There was some article in my feed - I think maybe by Charles Mudede - about how nothing would be done about global warming until lots of white people started dying because of it. Days like this make it feel like perhaps that's not so far away.

In other news, I slept poorly, having strange dreams in which I was at my childhood home (Richmond Court in Maple Ridge), with my mother (who I think could speak normally, which was not the case the last few years of her life, due to her stroke) fielding a mysterious collect phone call of some sort, supposedly from my father, who was away (he had, in reality, predeceased her by some years, passing in 2009, but both of them were alive in the dream). There seemed to be an elaborate phishing hoax at work - at one point, I thought I heard my father shout something in the background, but then I was transferred to an operator who was going to connect me to someone else entirely (their name sounded oddly like Leon Spinks). I hung up and told Mom it was a scam, then wondered about the shout I thought I'd heard. Maybe I was imagining it?

John Cassavetes' Husbands also entered my dreams last night, but I forget the details. And for some reason, I woke up thinking I should send a Facebook message to Greg Godovitz, to see if he has copies of the last Goddo CD, King of the Broken Hearts, which I don't have (and which was, I gather, poorly received). Maybe he'd sign it for me, if so?
Posted by Allan MacInnis at 6:40 AM