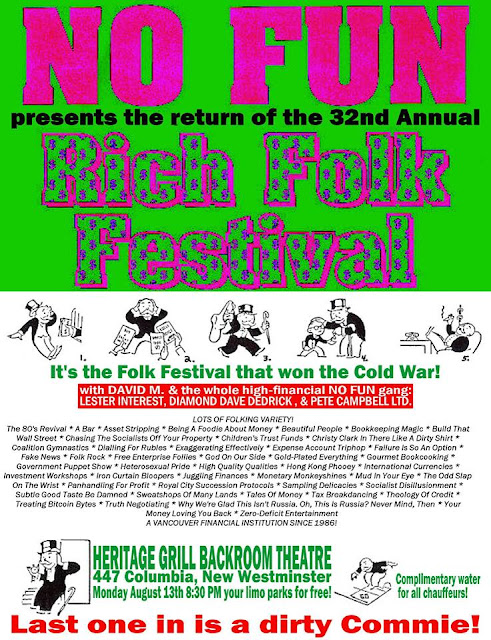 Yes, you saw him at the Fight Back festival, doing a solo acoustic rendition of "Mindless Aggression," and a set of songs mostly drawn from the Body Shop Battle of the Bands of some 40 years ago, where DOA, Doug and the Slugs, and NO FUN all competed and lost, to a band now completely forgotten by time (M. declared DOA the real winner of that battle as part of his set at Fight Back, and indeed, should history be the judge, they were).

Maybe you even saw David M. the year before at the Rickshaw, opening for Marshall Crenshaw Y Los Straitjackets (or busking outside for the first David Bowie tribute, also at the Rickshaw; I gather he and Tim Chan did something in front of the Prince tribute, too, though I didn't make it to that). Or maybe you caught his Bowie tribute outside Music Madhouse Records - weirdly, the best-attended David M. solo set I have yet to see, and with added Ozzy (RIP, little guy; we miss you).

Hell, maybe you even saw him at my wedding, performing a song we co-wrote, and doing a clever mash up of Ben E. King and Bruce Springsteen. Maybe you saw one or more of those things, but have you seen a full David M. solo concert? (Or have you seen one LATELY? He hasn't DONE one lately, bear in mind).

Here's a tip, if not: these solo shows aren't, in fact, solo shows. They're much, much weirder and richer than what you've seen him do at the Rickshaw or Music Madhouse or my wedding (which is comparatively stripped down and "professional"); in his own milieu, M's sets are in fact interactive, with members of "the David M. Cult" (including sometimes me) (and also including the odd other guest from outside the cult proper) getting onstage with M, to recite weird beat poetry, sing (if we can), shake percussion instruments, hold up ancient issues of Rolling Stone, serve as a straight man to his gags, serve as a gag to his straight man - nothing gay going on there, folks; move along - or, yes, sometimes to hold his Gorgo. Even notable songwriters like Pete Campbell (who, besides being of Pink Steel and the Wardells, authored my favourite song about being alienated by hockey) sometimes join him!

You also get covers, chosen to reflect  the theme of the evening; a sampling of props and decorations (and sometimes even souvenir posters and such) and a host of David M/ NO FUN originals; plus the odd dry witticism or sarcastic comment or sometimes full-on monologue in-between songs. They're pretty fun, and they're never, uh, crowded, so if you really don't have anything else going on Monday night, WHY NOT CHECK ONE OUT?

I have no idea what a typical set at a NO FUN Rich Folk Festival looks like, but I will be on hand for at least one of these shows to find out (people wishing to avoid me should go to the one in New Westminster, since my attendance there is much less likely). If you have been entertained with any of these David M. appetizers mentioned above, you should consider trying the full meal deal. It's a pretty fun night, I promise. 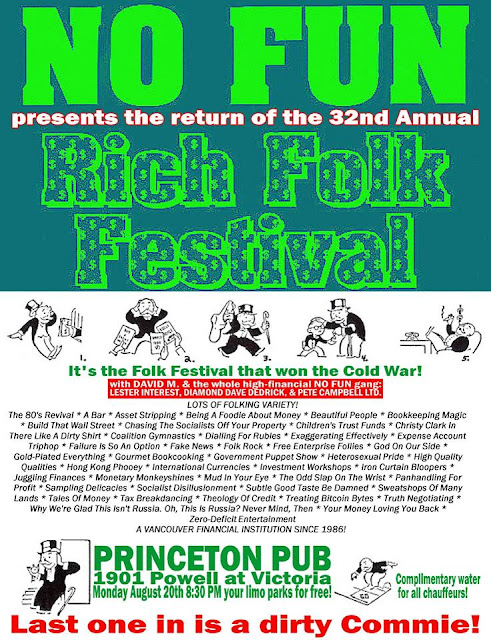 Posted by Allan MacInnis at 9:23 AM