One night only! (?) The Return of Kier-la Janisse!

I can't speak to the excitements of the rest of the city, but obviously *I* am really keen about the Flesh Eaters show on Thursday, and about the Border Radio screening on Wednesday. But one thing I haven't written much about, that I am (almost) equally excited about, is for (writer/ programmer/ publisher) Kier-la Janisse to be hosting the Q&A with Chris D on Wednesday. It wasn't JUST the Flesh Eaters show that inspired the Border Radio event, understand: it was that Kier-la (pronounced K-La) had announced, as a friend and, I presume, a fellow fan of Chris D's, that she was going to fly out (I think from Montreal) to attend the concert. Chris D. coming to town was already an argument to show one of the films he's involved in, but Chris D. and Kier-la? ABSOLUTELY we needed a film event. (Yes, there is conflict of interest afoot here, gang, but my rules don't forbid me from writing about things I'm involved in on some level. It ain't about the money, anyhow, it's about CREATING AND SUPPORTING CULTURE THAT MATTERS, right? If it were about the money, none of us would be doing this; this blog wouldn't even exist). 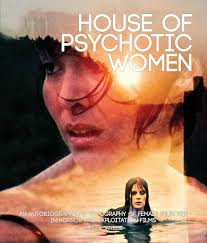 There's tons I don't know about Kier-la, but the stuff she HAS done is amazing to me. She was the founder and curator of the horror film festival Cinemuerte, for one. Not only did I see some great films there - Vice Squad, Class of 1984, Phantom of the Paradise (but I stupidly missed the July 4th Toilet event afterwards) - maybe even a 1990's midnight movie screening of Peter Jackson's Bad Taste? Was that you, Kier-la? - but my first piece of film writing published in Vancouver, on Zev Asher's documentary Casuistry, ran in the last issue of Terminal City, apropos of that film screening at Cinemuerte. No Kier-la means no Al-as-we-know-him (thanks also to Fiona Morrow, here, btw). Later on, Kier-la curated a rock music festival called Big Smash in Vancouver that had some fantastic content - the Roky Erickson documentary, say, or Peter Watkins' Privilege, which she tracked down a print of and had it flown out, at some expense, when the film still wasn't seeable on DVD. She also brought Wreckless Eric up here for that - he picked Godard's Sympathy for the Devil to screen, which he introduced - and Kier-la organized a very memorable concert at the Railway for him, which kinda blew me away (even if he, himself, was a bit off-puttingly cranky at times - I tried to gush on him about his album, Big Smash, and he would have none of it). At that time - if my timeline isn't wonky - she was programming at the Alamo Drafthouse in Texas, and made some cool little movies there, editing together footage to make a doc on Krautrock that she played between features at Big Smash (I was impressed, lots in it I didn't know, but as I recall she was very nonchalant about it). Believe she did I Was a Teenage Quincy Punk, too, and made time to go get a video hello from Roky to play before the film. What a generous, generous person; I, for one, have missed her programming in Vancouver a lot. 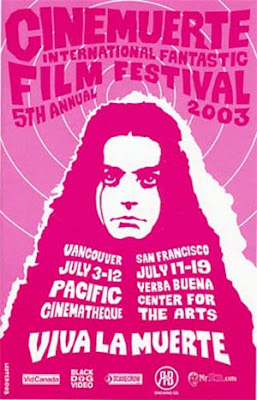 Oh, she was pretty important to the early years of Black Dog, as well, but I never really was a Black Dog regular. Great store tho'.

It's been awhile since I've seen anything she's curated. I loved her programming when she was in town, but one too many disappointing turnouts meant she eventually moved on. After leaving Texas, she ran a cinema in Montreal called Blue Sunshine, along with a colleague from my Nerve Magazine days, Dave Bertrand. There's a cool little video interview with her online about that. I know she's still involved in programming back east, but I'm not sure if Blue Sunshine is still extant, sadly. I have not, to my embarrassment, read her memoir/ film book House of Psychotic Women yet -  published on FAB Press, who are one of the coolest imprints out there, also doing Robin Bougie and Stephen Thrower titles - but I have at least one Spectacular Optical book on my shelf, Satanic Panic, featuring an essay about organized child abuse and the discrediting of Satanic ritual abuse by Vancouver's own Adrian Mack. The book also features an article on the films and music inspired by the story of teenaged "rock'n'roll" Satanist/ drug dealer/ murderer/ metalhead Ricky Kasso, whom I wrote about as part of my Electric Wizard review a year or so ago (if I may, it's one of my favourite pieces of music writing I've done). 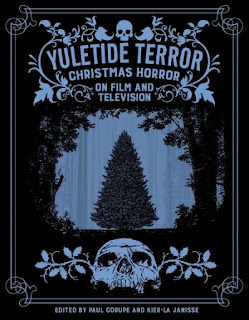 Anyhow, folks, no time for much else this morning - I gotta go grab some pics to illustrate this - but if you're lucky, Kier-la will have a few books with her on Wednesday for your purchasing pleasure. Welcoming her back to Vancouver! Even if you don't care about the Flesh Eaters or Allison Anders or Border Radio, if you like cult and horror movies, come out Wednesday at 9pm to the Vancity Theatre to see a Q&A between Chris D. and Kier-la...! Not likely to happen in Vancouver ever again, gang. Now where the hell is my Cinemuerte t-shirt...?
Posted by Allan MacInnis at 8:48 AM

Allan, I bumped into my pal Dave who runs The Rock Shop sound system business. Told him I'd seen the Flesh Eaters and he said they once played a six night residency at the Savoy in Gastown! I wonder what year...

Maybe he is thinking ofxthe Fleshies or some other band - the Flesh Eaters have never played a Canadian show before now - i promise!