Woke up to a blog-comment/ lecture on a piece of writing I did from five years ago.

It's kinda interesting to me to see anyone reading stuff I did from that long ago, let alone taking me to task for it. I mean, I didn't even remember what I wrote (and the idea that anyone would take it seriously enough to respond to it is kinda flattering, really, even if they're hatin' on me). The person in question might have a few points, I dunno. It's early in the morning. Wakin' up to a spankin' over a five year old potential tastecrime is a bit odd.

As you will see, tho', (in the linked piece, above, and the comments section below it) it was about the only time I saw George Carlin. Let me just say here, without reiterating the above-linked piece, that I have great love for George Carlin, meant him no disrespect in the slightest in that piece of writing, am sad that he is gone, and would love to hear what he would make, say, of President Donald Trump, or Harvey Weinstein, or #metoo, or  Louis CK, or so forth. There have been a lot of deaths of some note in the last decade, but in terms of PEOPLE WHO I ACTUALLY SPENT TIME WITH - whose words I have spent the most time on, whose ideas and observations have most shaped me - the two I have felt the most are probably George Carlin and Lemmy.

I got to actually TALK to Lemmy about death, and know he had a pretty good sense of humour about it - there's a line from a very early song he wrote and sang, with Sam Gopal, called "Escalator," to the effect of, "if you like me when I'm living/ you're gonna love me when I'm dead." He actually chuckled when I quoted that back at him during an interview and talked about how people get better after they die. Death and mortality and serious illness are terrifying things to me since my brush with cancer last year, and I hope I too can keep a sense of humour and perspective as they get closer (I'm almost 50!). Lemmy had a pretty great way of dealing with the inevitable, it seems, living exactly the life he wanted to live right to the end (even if he hadda switch out Coke for Diet Coke because of his diabetes).

Carlin got a little morbid in his last couple shows, for my taste, actually - there's some really kinda nasty bits, amongst the humour and wisdom.  But as far as dark death-related humour goes, nothing I have seen is funny in the same way as this ad that appeared in the Georgia Straight shortly after George Carlin died. He had a show scheduled at River Rock Casino when he passed; so this is what the casino ran, to let people know the show was off. 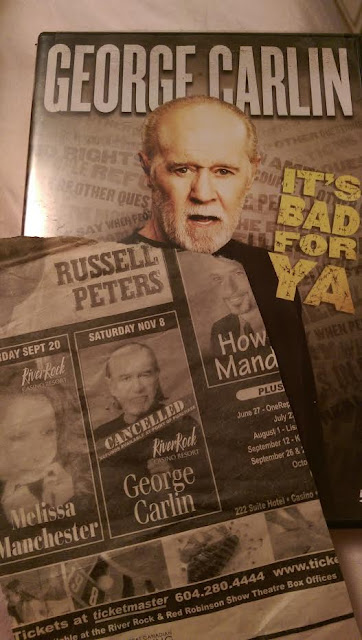 If there IS footage of that final Carlin show mentioned, I think they should make this the cover of the DVD, actually. George Carlin: Cancelled. I would buy it.  And seriously, blog commenter: there is no spite or disrespect or so forth intended here. If Mr. Carlin were around, I would show him this ad, and he would laugh, of this I have no doubt.

Have a good morning...
Posted by Allan MacInnis at 9:12 AM

In a world apparently inspired by Woody Allen and Roman Polanski, Carlin and Kilmister are fair game in the idol game park I reckon.

Oh dear, how can you be turning 50 this year! That means I'll be 55 a few weeks after you. Time marching on.