So I did that big Vicious Cycles piece and was kinda relieved: whew, one more article off my plate! Just gotta finish a couple other things that I've been working on - bev davies, Art Bergmann, Pere Ubu, Flesh Eaters, and maybe some older stuff I have long wanted to tidy up, and then I'm FREE, I can be FREE, I have no new bands I have to wr...

...oh, yeah, there's the Slow reunion, and Red Herring have a new album, and Coach StrobCam have a gig on Friday and then there's David M's Christmas show and...

...no, no, no: I have bills to pay! I need work! I can't be distracting myself any further - I need to be EXTRACTING myself from the non-lucrative world of music journalism, where 90% of what I do gets no pay beside the odd guestlisting, usually for gigs I don't end up making it to ANYHOW... like the joke goes, I'm gonna die of exposure if I don't stop, I need a FULL TIME JOB, and soon, and one that doesn't end in the union going on strike (leading to layoff of all junior staff), or the company going bankrupt, or the contract ending and being rejigged or...

...And then I stop in Neptoon Records, and (Vicious Cycles drummer) Ben Frith wants to give me an album, for another band he's in.

Well I can LISTEN to it. (What's the line in The Godfather III again?). 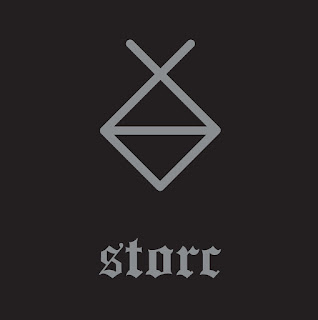 And damn it: I like it. storc - all lower case - is a noisy, slightly spazzy* (more-or-less) punk band (featuring local stalwart Luke Meat on vocals) that reminds me immediately of another great noisy, slightly spazzy local punk band, BRASS, whose debut album, No Soap Radio, I reviewed here. And it's not actually that off the mark as a comparison, since as soon as I mention BRASS to Ben in a Facebook message he writes,

"Hey Allan! We love BRASS! They're one of our favourite bands to play with, in fact, we held off on doing our release show until they were back in town from their tour." (And as you will see, the two bands are soon to play together at the SBC Cabaret...). 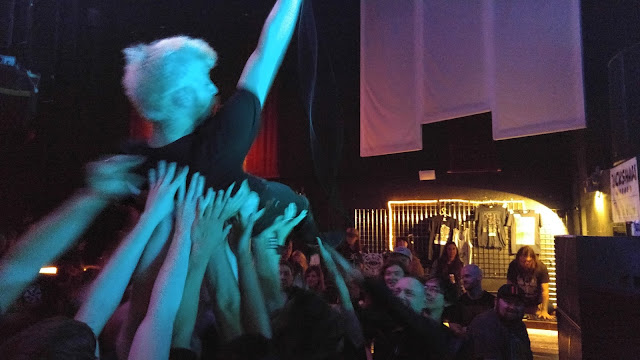 The new storc album gets a fuller writeup, not by me, in Exclaim! There are things in it I had not noticed or thought about the album, myself, but "unhinged" is definitely a good word for their music. It's certainly the most sonically brute stuff that I'm aware of Joshua "Magneticring" Stevenson having a hand in - though I haven't followed everything he's done, and there may well be some subtleties in the music that I didn't fully appreciate, since what I noticed most on spinning it was the primal (if tuneful) ROAR the band makes... My main observation/ question for Ben is that the liner notes say the sessions for the LP were recorded in 2014. So what's with the delay in the release?

Ben responds: "We really took our time in between giving mix notes. We actually didn't have final mix until July 2015. We weren't in a hurry, and nobody knew we had it coming, so anytime we got a mix, we'd sit on it for a while before sending in notes. I think we only did a couple of minor revisions, but we wanted to know we were happy with it instead of rushing. I guess the delay between then and now would be that we all just got super busy. Matt went on a couple of longer vacations, I went on tour for a couple months, Luke went away as well. Just never got to all sit down and get the rest of it done (art, etc). The really ironic thing is, we are going into the studio to record our 2nd LP this weekend....being the weekend before we release the first one, haha!"

It actually sounds like a pretty good way to do things, though it does make me wonder why I haven't ever heard of storc before, if they've been around since 2011 (but I don't have my ear THAT close to the ground). Anyhow, it looks to be a great cheap gig to be at - I mean, $10 is gonna buy you more manic energy, sweat, and moshable music than you're gonna get in a year at Rogers Arena, no matter who is playing.

But speaking of arena shows - I actually fucked up in that Straight Vicious Cycles piece, it turns out. I knew that Ben had toured Europe with Black Sabbath; Rob had mentioned it to me, and then I saw Ben on the Main Street bus and heard about it from him direct over the time it took to get from Neptoon to the Skytrain Station. But I misremembered key details: he was NOT actually a Black Sabbath drum tech (he tells me he didn't mind the error, though, because it makes him sound cooler than he actually is!). While we're chatting, I ask him to clarify, and he explains that he "worked as the drum tech for Rival Sons for the three Canadian shows, and then they hired me as a bass and keyboard tech for the European tour (also opening for Sabbath). Which was extra funny, because I can't play bass or keyboards!"

Anyhow, I doubt very much that I will be at the SBC Cabaret on Saturday, for the Womankind/ HEDKS/ BRASS/ storc album release show, but I have seen two out of four bands on the bill, and spun vinyl of the headliner, and enjoyed them all a ton. HEDKS (rhymes with "Smashface") is the band of one of the Art Signfied people who I now know primarily by her Facebook monicker, Taser Fraser. BRASS have one of the more furious, fun, stage-divin'-centric live shows out there. And storc sound to be great - energetic, unruly, not without a sense of tunefulness or artistry but also noisy and hyper and - I would call them "shambolic," since "unhinged" is taken, except "shambolic" suggests something slow, and there's nothin' slow about storc, howevermuch of a (controlled) shambles may be found on the album.

So check it out. 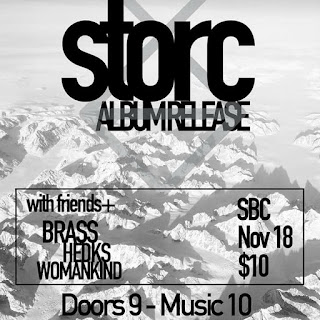 *note: "spazzy" is meant as a term of praise
Posted by Allan MacInnis at 11:24 AM