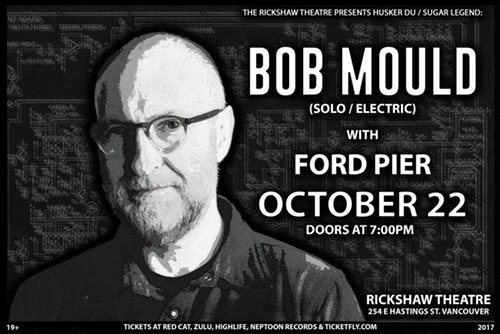 Interesting to compare befores-and-afters in Bob Mould's setlists: compared to the first part of this tour (which took place before Grant Hart's untimely departure), there are, if my count is right, five more Husker Du songs that are likely to be played tomorrow (there were seven or maybe eight last night, if you count "Love Is All Around"). I'm inclined to speculate that my interview with Tom Scholte about Bob's musical history (and our Du fandom) might have something to do with the sudden appearance of "Celebrated Summer" last night, but it is only speculation. It seems much more reasonable to surmise that the inclusion of a certain Grant Hart song has something to do with Grant Hart's passing, but in deference to those who don't want to know, I will say nothing as to which song it is...

Anyhow, when Bob Mould last played Vancouver, nine years ago, I had never owned a single album he was on, post-Warehouse. I had no plans of fixing that anytime soon. Since finding out about this show, I have done my best to amend my ways, and now have legit vinyl or CD releases of five of his solo LPs and two Sugar albums. And I've re-acquired Metal Circus, which I used to have, then sold, then had, then sold, and now hope to keep til I kick. I have overcome any and all issues I ever had; this guy is a genius songwriter and guitarist, and the fact is, right now, given a choice between spinning my FAVOURITE Du, which - you all know by now - is Zen Arcade; or spinning any one of Silver Age, Beauty & Ruin, or Patch the Sky, I would likely pick one of the latter, which I am really enjoying getting to know. I am finally ready to let go of my protracted adolescence and embrace adult Bob Mould (figuratively, anyway).

I am really, really excited for tomorrow's show.

By the by, interested parties may wish to also read my interview with tomorrow's opening act, Ford Pier, in which he (sorta) teaches me a new word ("meconium") and cracks a joke I don't get (because I didn't know fans of NRBQ referred to them as "the Q." Truth is, I don't know my NRBQ much at all). I am looking forward to seeing Ford again, too. But not as much as I'm looking forward to Bob Mould...
Posted by Allan MacInnis at 9:50 PM